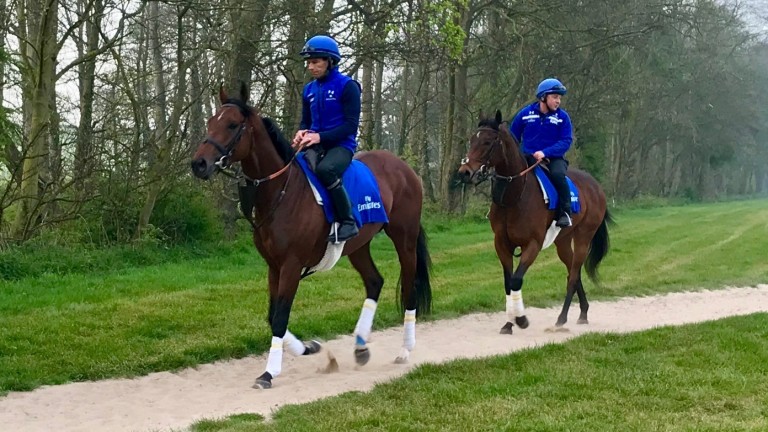 Godolphin are out to land the first European Group 1 of the season at Longchamp on Sunday, when in the words of trainer Charlie Appleby the progressive Ghaiyyath "faces his first acid test".

Sheikh Mohammed's operation is chasing its third top-flight victory of the year already having the two on World Cup night in Dubai with Old Persian (Sheema Classic) and Blue Point (Al Quoz Sprint).

Like Old Persian and Blue Point, Ghaiyyath spent the winter in Dubai at Marmoom Stables, but his stay was cut short and he returned to secure an impressive all-the-way success in the Group 2 Prix d'Harcourt this month, the traditional warm-up for the Ganay.

A one-time Derby hope, Ghaiyyath impressed in his final spin on Appleby's private watered gallop on Wednesday, when he was accompanied by the 109-rated Glorious Journey, himself a dual Group 3 winner.

Partnered by Shane Fetherstonhaugh, Ghaiyyath was nicely on top at the close of his five-furlong breeze but is unlikely to have similar company at Longchamp this weekend.

Appleby said: "We tried running a pacemaker for Ghaiyyath in the Harcourt but James Doyle on Lucius Tiberius couldn't get near him, so we won't need to do that again. Ghaiyyath has earned a crack at the Ganay, in which he faces his first acid test.

"We know he likes Longchamp and I'm not worried that the distance is ten and a half furlongs as he wasn't stopping over a slightly lesser trip last time. He enjoys cut in the ground and hopefully should get some."

Appleby added: "We'll get this out of the way before we think about future targets, but we see him as an Arc horse."

Ghaiyyath figures among just seven entries for the Ganay, which was won by Cracksman last year and whose trainer John Gosden could run Coronet this time.

In other Group 1 plans, Appleby revealed last year's Breeders' Cup Juvenile Turf winner Line Of Duty is likely to step up in trip.

He said: "We had Line Of Duty entered at Newmarket but he's likely to go for the Group 2 Dante Stakes at York next month."

FIRST PUBLISHED 12:03PM, APR 24 2019
We tried running a pacemaker for Ghaiyyath in the Harcourt but James Doyle on Lucius Tiberius couldn't get near him