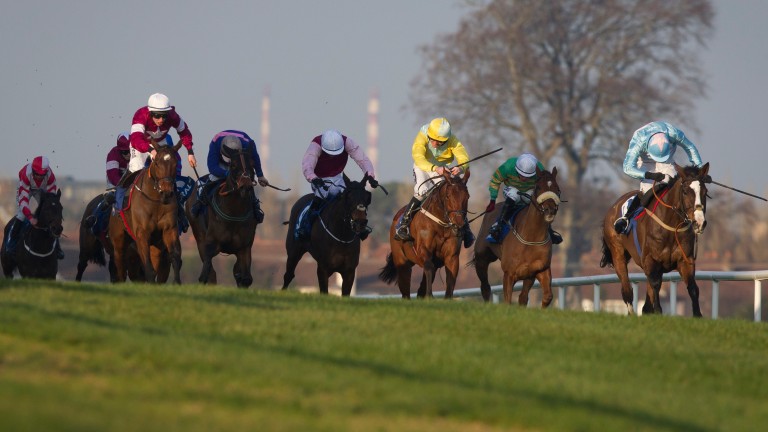 If Gordon Elliott has a maiden trainers' championship to his name at the end of April, races like this is what he will reflect on, the last-gasp victory of A Toi Phil providing the trainer with an incredible seventh straight victory this season in graded handicap chases worth €100,000 or more.

It looked extremely unlikely turning into the straight as the Willie Mullins-trained veteran Rolly Baby travelled strongly to challenge for the lead, only for Stellar Notion to get a better jump at the last and seize apparent control of the contest.

A Toi Phil looked to have a mountain to climb turning in and while he was running on he still had six in front of him jumping the last. But under a very strong drive from Jack Kennedy he got up on the line.

"These are the races we want to win so we have to give him a rattle at it," said Elliott of A Toi Phil, who was making a quick transition having run in a couple of Grade 1 novice chases on his two most recent outings.

Asked when he considered this race for him, Elliott replied: "When the weights came out. He had 10st 7lb and I didn't think he was that badly handicapped.

"He's still a novice, he's a horse we might keep away from Cheltenham, there are plenty of good prizes here at home. I'd think on good ground he'll get any trip, and he'll certainly get an entry in the Irish Grand National.

"Jack was great on him. He was a lot further back than I wanted him to be but he said he was flat out, he couldn't go any quicker."

It was another frustrating, perhaps even gut-wrenching race for Henry de Bromhead with runner-up Stellar Notion mugged on the line here having finished second to the Elliott-trained Tiger Roll in the Munster National at Limerick in October and fourth to Elliott's Noble Endeavor in the Paddy Power Chase at Christmas.

It's probably a good job for de Bromhead that he is enjoying his best ever season, as he might not have been so phlegmatic in defeat as he was.

He said: "I'm disappointed for the horse, he was so honest and ran his heart out. It's disappointing not to win and it's hard to get these handicaps from Gordon. We'll be back again."

FIRST PUBLISHED 3:11PM, JAN 22 2017
I would think on good ground he will get any trip and he'll certainly get an entry in the Irish Grand National