A September-Alpha Centauri clash something to look forward to 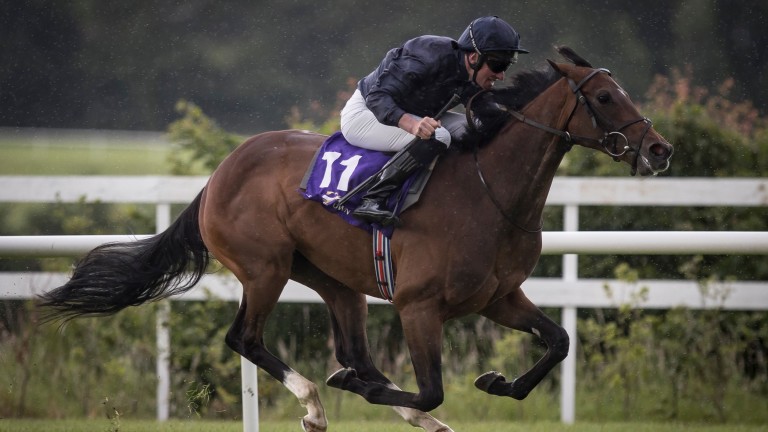 September: lacks size but is a serious player for top honours
Patrick McCann
1 of 1
6:16PM, JUL 1 2017
The performances of two Irish-trained juvenile fillies, one in victory and one in defeat, stood out at Royal Ascot last week. Call it the long and the short of it, if you like.
September lacks size, but seeing her scamper to victory like an electric bunny in the Chesham Stakes confirmed the big impression she created when scoring on her debut at Leopardstown. She looks a serious player for bigger prizes later in the season.
And the same applies to Albany Stakes runner-up Alpha Centauri who, unlike September, is a massive filly. She too should have a big future, especially when she steps up in trip. She lost her unbeaten record by a neck but emerged with her reputation intact. Should the pair meet in the Moyglare or elsewhere it will be a fascinating clash.
The Albany winner Different League has a strong Irish connection. Owned by Con and Theresa Marnane, her trainer Matthieu Palussiere, based at Maisons-Laffitte, spent many years in different roles in Ireland, working for the Aga Khan and Mick Halford before setting up as a trainer here. Hearing him deal with the media after Different League's win it was difficult to know whether he was speaking English and French with a French or Irish accent. More like a mixture of both and even if you didn't know about his Irish connection you'd have guessed pretty quickly he had spent several years here.
For sheer guts and consistency Highland Reel's win in the Prince of Wales's Stakes was out of the top drawer. Ballydoyle's biggest money winner looked like being swallowed up by a few of his rivals entering the final furlong before his courage and ability saw them all off. His brother Idaho was not to be outdone in the Hardwicke Stakes. A year younger than his brother and rated 5lb lower than him on official ratings, Idaho has yet to bag a Group 1 but it will no surprise if he manages to do so, if not this year then in 2018.

Was the bend Churchill's undoing?

It wasn't all joy and celebration for the Coolmore-Ballydoyle team at Ascot, with Order Of St George losing out narrowly in his bid for back -to-back wins in the Gold Cup and Churchill's moderate effort in the St James's Palace Stakes an even bigger disappointment.
Whatever the reason for Churchill's lacklustre performance, the fact the three horses who finished in front of him had previously been beaten by the dual Guineas winner indicates that Churchill was well below his best. Seeing stablemate Lancaster Bomber finishing in front of the odds-on favourite is surely proof that Churchill had a serious off day.
The pair had raced against each other five times before Ascot and Lancaster Bomber had finished behind Churchill in all of those races. Lancaster Bomber is a talented racehorse but it would be stretching the imagination to suggest he suddenly found the improvement to finish two places, and almost three and half lengths, in front of Churchill.
Of all the possible reasons for Churchill's flop one that hasn't got much airing is the fact that the St James's Palace was the first time the colt had raced around a bend. Might that have had anything to do with it? Maybe, maybe not.

Not for the first time the performance of a few Ballydoyle horses at Ascot, surpassed expectations. Maybe not the expectations of their connections but few could argue that there was anything in the form book to suggest Sioux Nation, a 14-1 shot, would sparkle as he did in the Norfolk Stakes or that Spirit Of Valor, a 66-1 shot, would get within a neck of victory in the Jersey Stakes. Had Spirit Of Valor won he would by some way have become the longest-priced of all O'Brien's 61 Royal Ascot winners. That distinction belongs to Sword Fighter who won last year's Queen's Vase at 33-1.

Finding suitable opportunities for a filly to win a black-type race is an important part of race planning for any trainer. So full marks to Ken Condon for sending Elusive Beauty to Carlisle on Wednesday to land the Listed Eternal Stakes. The three-year-old had the ease in the ground she appreciates and the mission was accomplished.
FIRST PUBLISHED 6:16PM, JUL 1 2017
For sheer guts and consistency Highland Reel's win in the Prince of Wales's Stakes was out of the top drawer