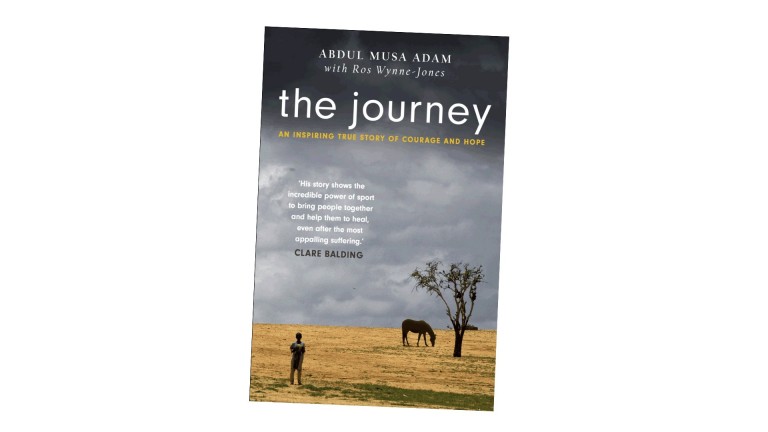 The Journey: An Inspiring True Story of Courage and Hope by Abdul Musa Adam with Ros Wynne-Jones, published by Mirror Books, £8.99

Picking through burnt rags of clothing once belonging to his friends and family, Abdul Musa Adam was staring into an abyss.

War robbed him of everything he had ever known. His childhood, his freedom and his way of life evaporated after a government-led genocide in Darfur swept through the lands he once called home.

Almost all his family and friends died as a result of the conflict, which UN statistics suggest has cost 300,000 lives and led to the displacement of up to three million people.

How, then, could a boy put through such unimaginable anguish one day find himself surrounded by the pomp and circumstance of Royal Ascot?

The Journey is Abdul's personal account of his story and is as much a testament to his powers of endurance as it is a window to the hardship of life as a refugee fleeing conflict in Africa.

From Darfur to Chad, then on to Libya and across the Mediterranean to Marseille, Paris, Calais and eventually England, the tale is tear-jerking and, at times, jaw-dropping.

The heart aches as those who represent Abdul's last link to home are torn away in horrific circumstances and his fear is palpable as he stows away on a lorry in a desperate attempt to reach what he hopes will be a better life in England.

The full details of this extraordinary story cannot be captured here. It really does need to be read to be fully comprehended.

Despite such turmoil there was always one constant for Abdul, something to take him back to his happy childhood playing on the vast grazing lands and watering holes of Darfur. A love of horses.

He recounts a tale of his father lifting him on to the back of a small pony when he was a tiny boy. Abdul speaks of having no fear, instead feeling at home as the pony breaks into a run.

It has the scent of a 'eureka' moment, a realisation that he has been bequeathed with the gift of horsemanship. This talent begins to be fully realised only after a visit to the Greatwood charity near Marlborough, Wiltshire, which uses retired racehorses to help young people facing difficulties.

Abdul goes on to work for Nikki Evans in Abergavenny, attends the National Horseracing College in Doncaster before progressing to a full-time job as a stable lad with Andrew Balding at Park House Stables in Kingsclere.

He led out Shadn before her run in the Commonwealth Cup at Royal Ascot this year. A war zone replaced by pristine turf, Kalashnikovs by top hats. Yet on reading it becomes clear Abdul never forgets where he has come from and his experiences continue to have a profound impact on his new life.

While this story appears to have a happy ending, it is also one tinged with great sadness. The loss of his brother, Yusuf, gnaws at Abdul every minute of the day. Is he alive? Is he dead? Is he still in the camp in Chad where he and Abdul parted ways over a decade ago?

This creates a life of uncertainty, where Abdul is trapped by a strange mix of hope and fear as he continues his search for Yusuf.

One can only hope his search is successful and that racing continues to provide a haven for a young man who appears to have found some semblance of peace out of the chaos that once surrounded him.

FIRST PUBLISHED 9:53AM, DEC 8 2020
How could a boy put through such unimaginable anguish one day find himself surrounded by the pomp and circumstance of Royal Ascot?