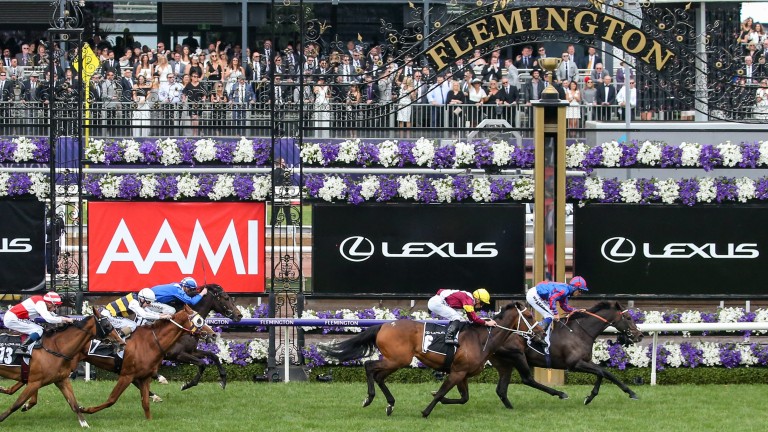 A Prince Of Arran: gets into Tuesday's Melbourne Cup without a penalty
Racing Photos
1 of 1
By Stuart Riley in Melbourne UPDATED 9:56AM, NOV 3 2018

Charlie Fellowes saddled the first Group winner of his short career and in doing so earned his way into Tuesday's Lexus Melbourne Cup as stable star A Prince Of Arran landed the win-and-you're in Lexus Stakes in authoritative fashion.

The margin of half a length did not do justice to the ease with which he won and there was more good news for Fellowes shortly afterwards when Racing Victoria's chief handicapper Greg Carpenter, in what is always the speediest assessment of his year, decided not to penalise the five-year-old for the race that stops a nation. It means he will line up in the 24-runner Group 1 handicap with 53kg (8st5lbs).

Kiwi-born jockey Michael Walker had A Prince Of Arran positioned perfectly throughout in fourth one of the rail and from the moment he worked around them into the straight and hit the front with two furlongs to run the result never looked in doubt. The pair were only ever just doing enough to hold off the late charge of Brimham Rocks, who was the horse who finished a neck ahead of A Prince Of Arran in the Herbert Power when they chased home Yucatan.

"That's the biggest win of my career, it's my first Group win and to win on a massive day like today is huge," said an elated Fellowes. "Getting into the Cup is amazing and we'll hopefully enjoy the next couple of days and the build-up as much as we can.

"I can’t believe we’re in the big one on Tuesday. This was our Derby, this was the race that we needed to win. Anything from now on is a bonus. I'm just over the moon. Michael gave him a lovely ride and we got there a bit too soon as he doesn't do much in front but his jockey said he picked up again when the other one came to him and we were always holding on to the line.

"Let's just hope he comes out of the race okay and we'll do whatever we can to freshen him up and run again Tuesday."

"I hope that's not the closest I'm going to get to the Cup." Good luck on Tuesday, @fellowesracing. pic.twitter.com/JVccgom9kY

Fellowes was also keen to praise former jockey Natasha Eaton, who now works for him, for her efforts with the horse. He added: "I have to give a special mention to the girl who's brought him over here, Tash Eaton. She's looked after him all year, she went to Dubai and America and has done the most amazing job. She's been on her own, she's never done anything like this before and the horse has improved out of sight. She's played a huge part in that and deserves a load of credit.

"If you'd told me we'd be stood here back in January I'd have laughed at you. He's always been the apple of my eye as he's a very good looking horse but he was very quirky and I always worried he wouldn't fulfil his potential. This year he really is doing what I hoped he would do when he was younger."

Chief handicapper Greg Carpenter will not penalise A Prince Of Arran for his Lexus Stakes win. He gets into the Melbourne Cup with 53kg pic.twitter.com/DlaJGrLSKu

As for reversing the form with red-hot favourite Yucatan, Fellowes said: "It's going to be tough, but the extra half mile will suit us. I don't think he was getting tired today, I think he was pulling up in front so hopefully we pull a good draw. The trip round here will suit my fellow, Yucatan's a good horse but hopefully the extra trip and a clear run will help, and maybe a little bit of traffic for him."

Nakeeta back in as Red Verdon ruled out

It was something of a rollercoaster day for connections of Nakeeta, who held the final spot in the Melbourne Cup field on Saturday morning. The Iain Jardine-trained gelding had to pass the vet in the morning to be eligible for the Cup and having come through that he was then pushed out of the field by A Prince Of Arran, only to get back in when Ed Dunlop's Red Verdon was ruled out of the race through injury.

Red Verdon had, along with Nakeeta, initially passed the vet on Saturday morning but after cooling down from his morning work was reported to be sore and having been reassessed was declared unfit to race.

Dunlop, who flew into Melbourne on Friday, was philosophical about the situation. He said: "I'm with the horse now and it's academic really. He's sore and he's not fit to race. It's not great, but we're not the first ones and the welfare of the horse is the most important thing."

Spare a thought too for Roger Charlton, whose Withhold was one spot above Nakeeta on the order of entry. He desperately wanted to wait for the Cup but was overruled and now knows he would have got into the field in the final spot.

FIRST PUBLISHED 7:30AM, NOV 3 2018
He's always been the apple of my eye as he's a very good looking horse but he was very quirky and I always worried he wouldn't fulfil his potential