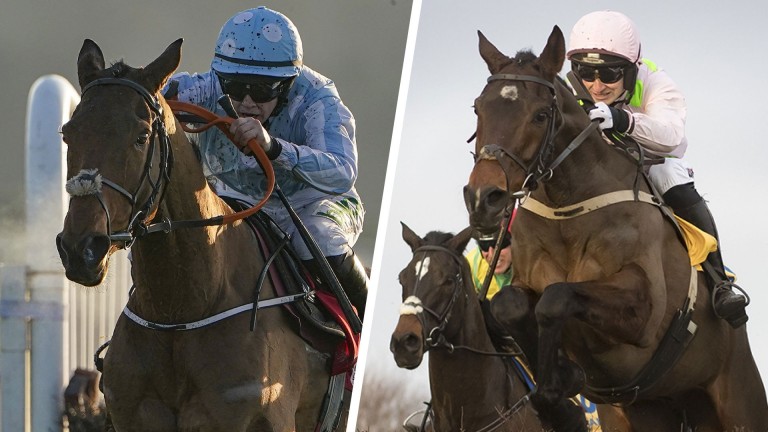 We keep repeating ourselves when we say 'this is the biggest test Honeysuckle has ever faced' but it is most certainly the case here.

When the seven-year-old won this race last year, she finished clear of the 146-rated Darver Star and Petit Mouchoir, who was rated 155.

The entire field this season are rated 157 or higher and Sharjah has soared to a mark of 164. She is entered in the Unibet Champion Hurdle and if she wins this, she could dispute favouritism, potentially forcing her trainer's hand on which festival Grade 1 to go for.

Those taking on Honeysuckle will point to the fact just two of her nine wins under rules were over two miles. She is better over further, and a few pacey rivals could outsprint her from the home turn.

However, Honeysuckle has shown she is adaptable and could be too good for her rivals, especially receiving a 7lb mares' allowance.

The way in which Sharjah quickened up to land the Matheson Hurdle at Leopardstown in December was easy on the eye – he is a slick jumper with a turn of foot and Patrick Mullins knows him inside out. A carbon copy of his Christmas win could be good enough.

Willie Mullins seemed genuinely shocked by the showing of Saint Roi over Christmas, so expect more for him. He has yet to justify his reputation. Abacadabras may want a bigger field on quicker ground, while Petit Mouchoir has been a star but shouldn't be good enough.

Honeysuckle won't go down lightly in this fascinating contest, but she might have to be better than she has ever been before to score.

Is Saldier the forgotten one?

Paul Townend has warned not to forget Grade 1 winner Saldier as the seven-year-old makes only his third appearance since April 2018.

After victory in a top-level juvenile contest, Saldier appeared poised to beat Champion Hurdle winner Espoir D'Allen when coming down at the final flight in a Grade 3 contest at Naas in November 2018.

He doubled his tally at the top table at the end of 2019 when winning the Morgiana Hurdle at Punchestown and the only time we have seen him since was in December, when he tired in the Matheson Hurdle.

Saldier is better than the bare form of that run and his big-race rider believes we can expect a much-improved performance from him.

"It will be nice to get a second run into Saldier before Cheltenham," said Townend. "He was off the track for a long time and no matter what you do at home, they are always going to need a day out.

"I think you'll see a different Saldier to the one you saw in the Matheson at Christmas and I'm looking forward to riding him."

Gordon Elliott, trainer of Abacadabras and Petit Mouchoir
Abacadabras scoped badly after his run at Christmas and the main negative for him would be heavy ground. He's much better on better ground. Petit Mouchoir has been a great servant over the years and he ran a big race at Christmas. Hopefully he can do the same again.

Willie Mullins, trainer of Saint Roi, Saldier and Sharjah
Saint Roi has to put his run here behind Sharjah at Christmas behind him, but we think he has every chance. This slower ground might bring out the best in him. Saldier was sixth in the same race but he ran like he needed it. He has improved since and we are expecting a much better show. Sharjah was very good here at Christmas, and if he can reproduce that form he should be very competitive. However, the recent rain won’t suit him as much as our other two.

Henry de Bromhead, trainer of Honeysuckle
She’s a joy to train and has an astonishing record. She’s in top form and the plan is to bid for a second Irish Champion Hurdle and then hopefully go on to Cheltenham. Again we’ll have the same dilemma, if you can call it that, of the Champion or the Mares’ Hurdle, but I don’t believe in looking further than the next race, so let’s see how she gets on this weekend. What I can see is that she looks stronger than ever and her recent work has been very good – I’m very happy.

FIRST PUBLISHED 6:00PM, FEB 5 2021
She's in top form and the plan is to bid for a second Irish Champion Hurdle and then hopefully go on to Cheltenham

'There's some screaming behind me' - what it's like to win the Galway Hurdle How a ping-pong rout told me everything about the extraordinary Patrick Mullins 'He's in brilliant form' - who is primed to run a big race in the Galway Hurdle? 'It's incredible to think I've won it twice' - can Patrick Mullins do it again? Decision made: superstar mare Honeysuckle set to stay over hurdles this season