A night of reminiscing, reflecting and celebrating 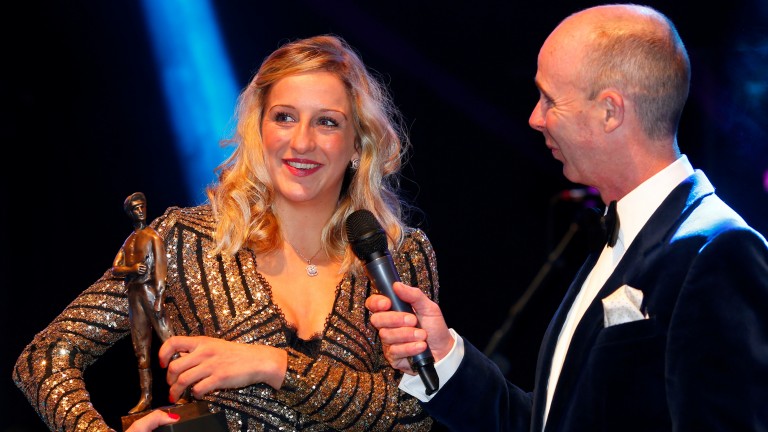 Josephine Gordon: collecting one of her two Lesters from Luke Harvey
1 of 1
By Tony Smurthwaite 6:07PM, DEC 23 2016

After all that wasting, all those miles, the daily suppression of desires, here were Britain’s jockeys giving it large.

Some stayed the course well on Thursday night, looking suspiciously familiar with big nights out. Quite a few, though, unseated majestically early.

Others took a moment to reflect on how their good fortune was intact in comparison with colleagues fallen and allies gone.

Life as a jockey can be unremittingly tough and a slave to iron discipline, so thank God for the Lesters. At a fantastic new setting inside the cavernous, but warmly, bedecked Ricoh Arena near Coventry, jockeys young and old, cherubic and wizened, sober and less so, came together to party.

Ostensibly an awards ceremony, the Stobart Lesters is now 26 years old and is always more than the sum of its parts. Its combatants make it so. Mingling with the glitz is an earthiness evocative of the risks jockeys accept as part of the day job, and which finds a ready outlet through bawdy co-host and former jockey Luke Harvey.

Within a few minutes of the stalls opening, Harvey is on stage asking lady jockey of the year Josephine Gordon a question related to her impending relocation from Lambourn to Newmarket.

“I’m not answering that!” comes the flushed reply.

Other winners were more forthcoming, albeit under tenderer handling from Harvey and co-host Oli Bell. Craig Nichol and Colm McCormack won their first Lesters and each bore witness to the hard graft required to make a noise in jump racing in the north. The wasting, driving and suppression of desires are unyielding and on top of that the opportunities fewer than in the south; leaving Nichol feeling only “so-so” when walking on stage.

“I’m very happy, but I want to say good luck to Ryan Hatch,” Nichol said. “It is very hard lying in a hospital bed when you can’t sit up. Our thoughts go to him.” 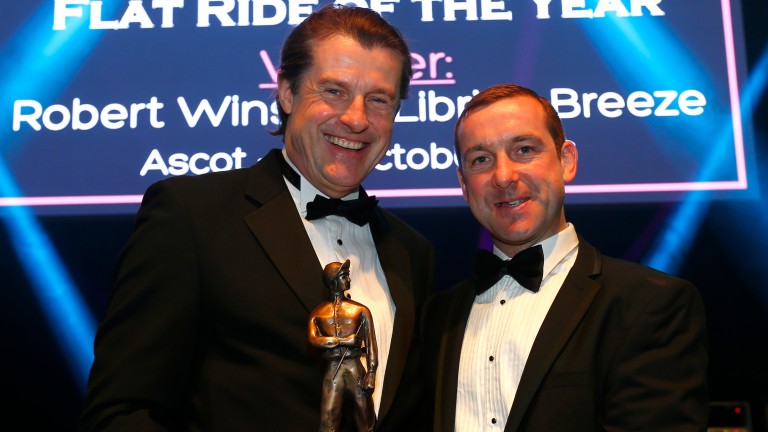 Robert Winston: receiving his Lester for a waiting ride on Librisa Breeze

Robert Winston’s road to his first Lester has been long and winding, and when his time came, it was warmly celebrated with his parents, partner and other family members as he won Flat ride of the year, sponsored by the Racing Post, for his nerveless gig on Librisa Breeze at Ascot.

Winston mused on the fickleness of the sport, admitting to having contemplated the merits of continuing into this his 21st season.

The patience drummed into him years earlier by Lynda and Jack Ramsden, he said, had flickered across his synapses a furlong and a half out at Ascot when a clear run looked the last option and “my heart was coming out of my throat”. The virtue of patience? Glorious victory and a first Lester.

Winston thus drew level with none other than Richard Johnson in number of Lesters won. The champion jump jockey’s first had arrived 20 years earlier, as top conditional, with none since.

No worries, Johnson’s name featured among four listed for the jump jockey special recognition award in light of him having finally won the title.

This was one gong which perhaps Johnson could happily let slip as the winner was Tom O’Ryan, who, in as powerful a message from the jockey collective as you could imagine, doubled up with the Flat jockey special recognition award, each being accepted by his widow Wendy.

O’Ryan had enjoyed his night at the Lesters last year shortly after ending his distinguished and award-winning career as writer with the Racing Post. His death in August robbed many of the wisdom accrued as writer, jockey, coach, broadcaster and horseman.

“I could stand here till midnight to talk about Tom,” said Dale Gibson, executive director (racing) for the Professional Jockeys Association. “He touched so many people’s hearts. He’ll be looking down on us now having a fag and probably swearing. You could have given a horse the worst ride in history on a dark day at Sedgefield and Tom would make you feel like King Kong.”

After a break for more food and more wine, Jim Crowley’s Lester as Flat jockey of the year left one to come before the dance floor filled. As the night wore on, a mass of tired and emotional young jockeys tried to make sense of the beat while, there at the front, was a couple dancing quietly together, unheralded and almost unnoticed. It was the closest that Sir Anthony and Lady McCoy came to the stage all evening.

McCoy earned the jump jockey of the year Lester in 19 of the previous 20 years and while this time around the nominations featured messrs Coleman, Fehily and Hughes there was only going to be one winner. Back for the first time since 1996 was Richard Johnson, and with a mission to highlight the reason he revels in the great triviality.

“Being in the weighing room is great fun, I really enjoy it,” he said.

“You enjoy it?” asked a bemused Harvey.

“I’ve no brain cells left at all,” Johnson added.