RP Sunday TEN THINGS YOU MIGHT NOT KNOW ABOUT . . . VERY EXPENSIVE HORSES

A monkey, a spider and the horse who was too valuable to race 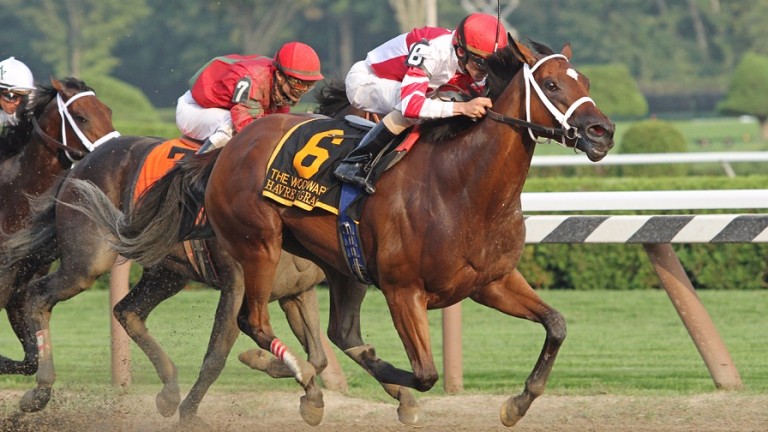 1 The highest price ever paid for a horse was that laid out by Coolmore for Kentucky Derby winner and stallion prospect Fusaichi Pegasus at the end of the colt's racing career in 2000. He reportedly cost somewhere between $60m and $70m, likely tending towards the top end, and in return has sired just four Group/Grade 1 winners.

2 The British or Irish Classic winner who cost the most to buy was Shareef Dancer, who was labelled the 'horse too valuable to race' when he was retired practically before he got back into the winner's enclosure after winning the 1983 Irish Derby. His purchase for stud duties, for $40m, heralded the bloodstock boom of the mid-1980s.

3 The Green Monkey is the most expensive two-year-old ever purchased, at an eye-watering $16 million (by the Magnier/Tabor/Smith axis at Fasig-Tipton in January 2006). Named after a golf course in Barbados, he raced three times and failed to win. His dam Magical Masquerade had several other offspring go through the sale-ring but none of them cost their buyers more than $225,000.

4 The $10.2 million paid for Snaafi Dancer (by Sheikh Mohammed at Keeneland in 1983) entered legend as the last word in unwise spending. The Northern Dancer colt never ran, being reportedly too slow to merit an entry, and sired only four foals after suffering from fertility problems. Only one of those foals, a filly named Winloc's Dancer, won a race.

5 Broodmares are not as valuable as stallions because they can only produce one foal a year, but that didn't stop Horse of the Year and three-time Grade 1 winner Havre De Grace fetching $10m at Fasig-Tipton, Lexington, in 2012. How to make the money back? A high pricetag on her foals – although the first, a War Front colt, failed to sell when reaching $1.9m at Keeneland last September.

6 Hubris was evidently not a problem for Fusao Sekiguchi, who raced the most expensive horse ever purchased, Fusaichi Pegasus (above). Flushed with positive feelings at Keeneland in 2004, Sekiguchi signed for $8m for a Storm Cat colt out of a sister to top-class runner and sire AP Indy. He named his acquisition Mr Sekiguchi – his equine avatar won two small races from four starts.

7 The bite of a white-tailed spider caused the death of the highest-priced yearling ever sold in Australia before he had raced. The half-brother to Black Caviar was known as Jimmy and fetched A$5m at the sales in April 2013, but he was put down before the year was out after complications from the bite led to laminitis.

8 US Triple Crown hero Secretariat's first crop was understandably eagerly awaited and it was one of their number, a colt named Canadian Bound, who became the first million-dollar yearling ($1.5m at Keeneland in 1976). Any hopes that he might emulate his great sire were dashed when he was beaten in all four starts, and at stud he sired only 106 foals, none of whom ever won a stakes race. 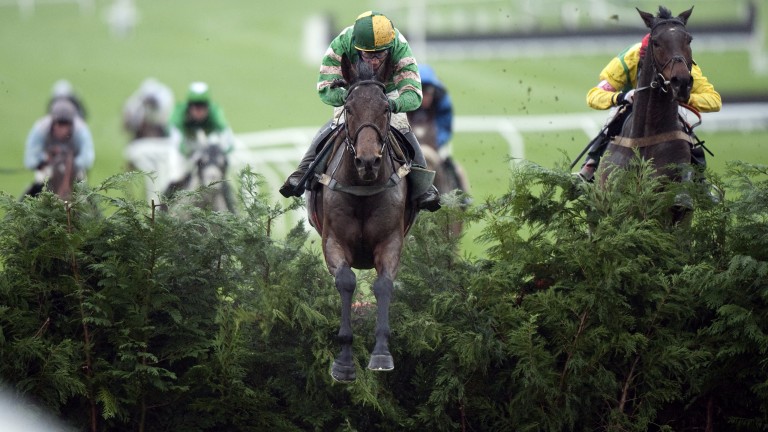 Garde Champetre: the highest-priced jumper ever sold at auction in winning style at Cheltenham
Edward Whitaker
9 Jump horses are primarily geldings and the rewards available at the winter game do not make it prudent for buyers to dig too deeply into their pockets. The most expensive jumper sold at auction was Garde Champetre, for whom JP McManus forked out 530,000gns (Doncaster 2004) — he recouped only a portion of his cost but he did win twice at the Cheltenham Festival, which is something beyond price.

10 In the days when money wasn't silly money but straight-faced and serious, the Observer Gold Cup (now Racing Post Trophy) winner Vaguely Noble was sold for 136,000gns (Newmarket, December 1967), a world record. He was sold only to settle his late owner's estate, and had no Classic entries to tempt owners at a time when supplementaries did not exist. His new owners were banking on him winning the Prix de l'Arc de Triomphe and becoming a hugely successful sire – and he did.

FIRST PUBLISHED 6:00PM, JUL 15 2017
Secretariat's first crop was eagerly awaited and it was one of their number, a colt named Canadian Bound, who became the first million-dollar yearling

'I had to learn online basics just to bet' - how the pandemic changed punting The drugs bust, the stun gun and the most extraordinary Royal Ascot finish 'Life moves on' - Sir Michael Stoute looks forward after his most painful year Alastair Down is invited into the wonderful world of the truly unique Derby hero 'I was caught by the dream – and it's gone on to become a compulsion'