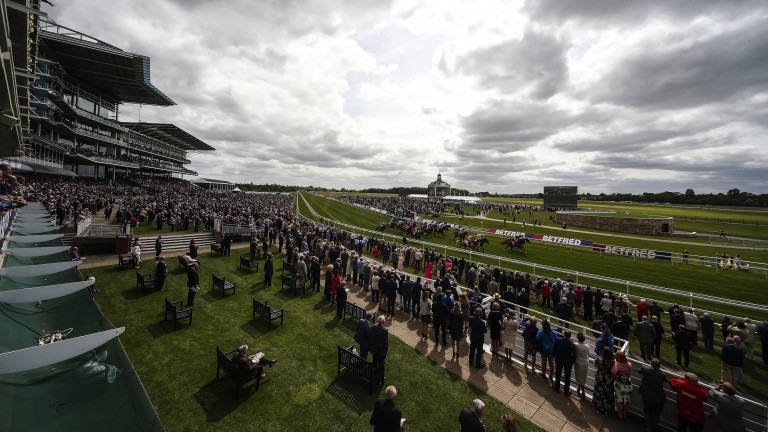 They have raced on the Knavesmire for not far off 300 years, during which there has been many a defining moment. Another can be celebrated this day, for nothing so perfectly represents the ambition, respect and excellence of those in charge of the great place than what happens this Saturday afternoon.

As the Sky Bet Ebor becomes a £1 million horserace, an important new chapter in York's wonderful history is written.

This is a proud day for not just York but also for British racing.

Even when held for £285,000 in 2017, the Ebor was Europe's richest Flat handicap. From £500,000 12 months ago it now doubles to £1m, placing it alongside the Grand National in value, while it also mirrors the nation's favourite race by becoming an open handicap, designed to attract some of the sport's elite stayers. In time, more of them may come, but the punting puzzle in front of us still represents the classiest Ebor ever staged. 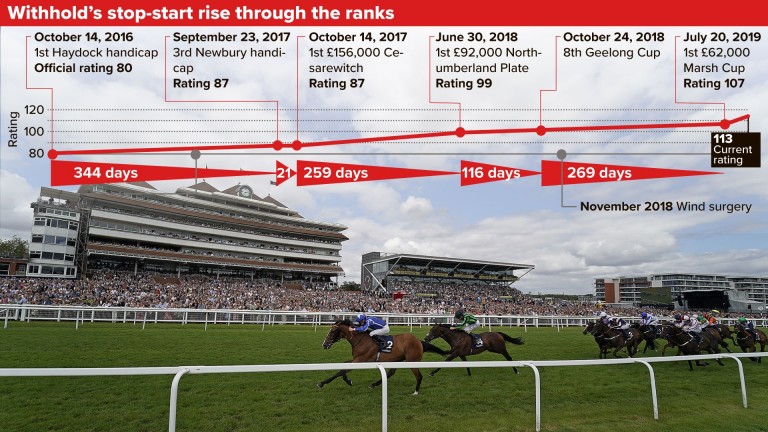 The 113-rated Withhold heads the weights and from a single-figure draw may seek to lead from start to finish, as he did when winning last season's Northumberland Plate and then again at Newbury on his belated seasonal reappearance.

The topweight is one of those in contention to be sent off market leader, as are the William Haggas-trained Raheen House – one of only two horses to beat Enable – and Ben Vrackie, an eyecatching contender under Frankie Dettori, for whom another headline-grabbing victory would surely delight the sponsors and racecourse.

There are intriguing challengers from Ireland in the shape of last year's fourth Mustajeer and the Willie Mullins-trained duo Max Dynamite and True Self, while plenty will hone in on Mekong for Sir Michael Stoute and Ryan Moore, but favourite to be favourite must be the incredible winning machine that is King's Advice.

On his debut for the Middleham master on March 2, the five-year-old bagged a Lingfield handicap off a mark of 71. Since then he has won at Kempton, Wolverhampton, Thirsk, Ripon, Newmarket and twice at Goodwood, most recently there showing that indefatigable will to win that is the hallmark of Johnston's squad members. With a 4lb penalty to carry, he this time runs off 112, representing a 41lb rise since that afternoon at Lingfield. Given his BHA rating is now 113, he is also a pound ahead of the handicapper. 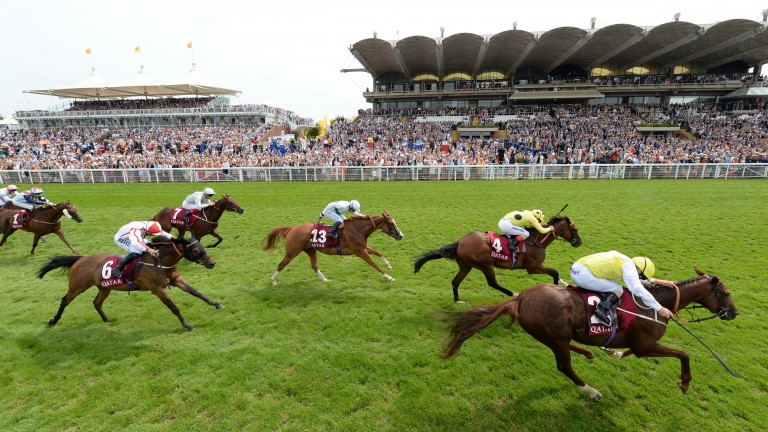 From top to bottom, ratings indicate how high the Ebor has climbed. This year's lowest-rated runners, Cleonte and The Grand Visir, are pegged at 105, only 8lb behind Withhold. Just ten years ago only one of the runners in the 2009 Ebor would have been rated high enough to get into this season's renewal – from which three-year-olds are barred – while the topweight then would have been the bottomweight now. Like the race itself, the Ebor runners' handicap marks keep going up.

Moreover, there are not only better Ebor runners. There are also more Ebor runners, with the field size increased to 22 thanks to York's investment in a mammoth starting stalls unit that completed a 10,103-mile journey from the Steriline Racing factory in Adelaide, South Australia.

There can be no doubt Australia, and in particular the Lexus Melbourne Cup, will be in the minds of so many of the Ebor connections. One of the York hopefuls, Prince Of Arran, finished third at Flemington last November, and it would come as no surprise if the latest Ebor winner heads in the same direction.

It is, indeed, York's desire to make the Ebor look and feel as much like the Melbourne Cup as possible. Those plans for the future are exciting. So too is what we have in the present.

When launched in 1843 the Knavesmire's most celebrated contest was known as the Great Ebor Handicap. Now, 176 years later and on a day worth celebrating, the great old race is greater than ever.

Laurens the leading light in upgraded City of York

The Sky Bet Ebor is not the only race taking place on Saturday that underlines York's desire to constantly up its own game.

Forty minutes before the showpiece the £225,000 Sky Bet City of York Stakes will be played out at Group 2 level for the first time. Both the racecourse and the BHA hope it may soon become Britain's debut all-aged Group 1 over seven furlongs.

It was only in 2016 that the City Of York was upgraded from Listed to Group 3 status. In its three Group 3 runnings it consistently hit Group 2 parameters, with the 2018 victor Expert Eye going on to land the Breeders' Cup Mile.

To secure Group 1 elevation the City of York will need to start reaching Group 1 numbers. Given the first Group 2 field includes six-time top-flight winner Laurens, a good start on that journey is being made.

There will be winning punters at the end of the Sky Bet Ebor and also a winning charity.

York and Sky Bet have teamed up for the Ebor Community Fund initiative, through which each of the 22 runners is affiliated to a local charity or good cause. The organisation partnered with the winning horse will receive £5,000 for a designated project. 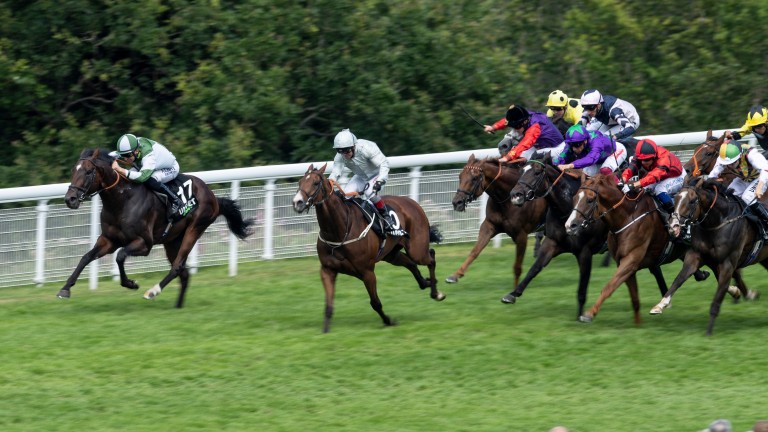 Ante-post favourite King's Advice has been allocated to the York Respiratory Group, which wants to fund portable equipment to let patients have a day out of hospital, while Withhold will be cheered on by Ryedale Dog Rescue, whose wish is to use the money to help fund the food and vet bills for dogs awaiting their forever home.

The main action is taking place at York but over the afternoon and evening there is quality action elsewhere.

At Goodwood a trio of Pattern races includes the Group 2 Ladbrokes Celebration Mile, in which Glorious meeting winners Beat Le Bon and Duke Of Hazzard return to Sussex.

The black-type action at Newmarket features Pretty Pollyanna in the Listed sprint, while chief attraction at Windsor is the meeting of Accidental Agent – moving up in trip from a mile – and Desert Encounter in the Winter Hill Stakes.

1.50 York
Sky Bet And Symphony Group Strensall Stakes
Not a bad Ebor meeting for John Gosden and Frankie Dettori, who look to have solid claims in this with Wissahickon - a winner of eight of his 11 starts, but tamely beaten at 1-3 when last seen at Lingfield in April.

2.05 Goodwood
Ladbrokes Celebration Mile Stakes
Craven winner Skardu, a solid third in the 2,000 Guineas, returns for the first time since his St James's Palace Stakes fourth, but will not find things easy against improving three-year-olds Duke Of Hazzard and Beat Le Bon.

2.25 York
Sky Bet Melrose Handicap
Three-year-olds cannot run in the Ebor anymore, but get their chance in this £100,000 heat, which might be all about Gosden and Dettori again as their representative First In Line looks a likely player.

2.40 Goodwood
Ladbrokes Prestige Stakes
Some clues for next year's 1,000 Guineas may emerge in Goodwood's Group 3, which Billesdon Brook won in 2007 - the year before her shock triumph in the Newmarket Classic. Her trainer Richard Hannon runs Dark Lady.

3.00 York
Sky Bet City of York Stakes
York officials would love this to be Britain's first non-juvenile Group 1 and the track has been rewarded with a cracking turnout, which is headed by star filly Laurens, last year's Prix de Diane heroine who has another five top-level wins on her CV.

3.40 York
Sky Bet Ebor Handicap
One of the sport's best Flat handicaps might more resemble a conditions contest with just 8lb separating the field, but that is no surprise with £1 million up for grabs. King's Advice, eight from nine in 2019, could easily net a slice of that.

'We don't mind who comes' - Mark Johnston bullish for Subjectivist Goodwood bid No July Cup bid for Campanelle as Wesley Ward takes US raiders back home 'I didn't say that. He's wrong' - Dettori counters Murphy best-horse claim A day when two big decisions had to be made - officials at Ascot got both right Did the stewards get it right in the Commonwealth Cup? Experts have their say 'Oisin's horse drifted about eight lanes' - Commonwealth Cup result reversed