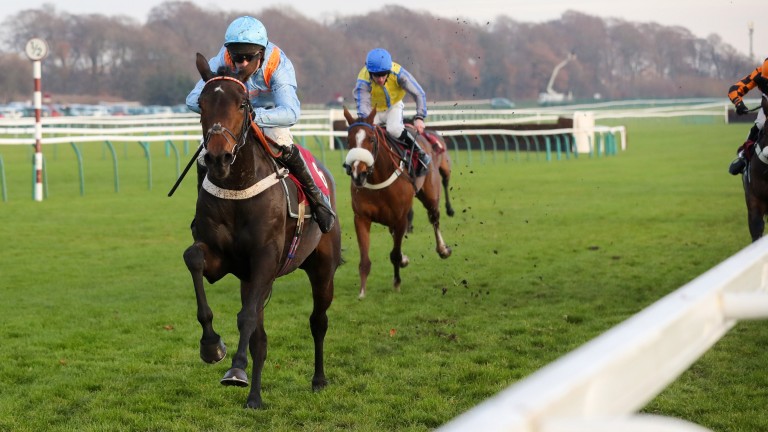 Considering Marie's Rock was touted as a potential successor to Epatante before she pulled and blundered away her chance in the Gerry Feilden in November, it must be seen as a concern that she appears to be the stable second-string for this race.

Maybe this is just seen as Floressa's day. In this race 12 months ago, she went down narrowly to Lady Buttons and she has improved this winter. She won the Gerry Feilden under an enterprising ride from Jerry McGrath and then finished a respectable fourth of five in the Christmas Hurdle.

This is a more competitive renewal than in recent years, if not quite as high quality. There is no Vroum Vroum Mag or Lady Buttons and Floressa, the choice of Nico de Boinville, has been put in as the early favourite.

It seems likely that the only company De Boinville will have up front would come from outsider of the field Sopat. That rival has done her winning at a much lower level at Fakenham. Given the enthusiasm with which she races, the choice of track seems no coincidence.

An even gallop would most likely be to the benefit of Marie's Rock, but it would also suit Miranda. She has improved again this winter for Paul Nicholls, having shown fairly useful form on the Flat over the summer. Her handicap win at Ludlow and close fourth at Musselburgh represent form as good as anything on offer, and it appeals that soft ground and Doncaster's long straight will give her ample time to catch up.

The market and ratings agree. Miranda is the overwhelming threat to the Henderson-trained pair. It would not take a great leap of imagination to think she might be the likeliest winner.
Keith Melrose, betting editor

The six-year-old retained an undefeated record coming into this season and was a leading fancy for last year's mares' novice hurdle at Cheltenham until injury ended her campaign.

A Listed winner at Taunton in December 2019, Marie's Rock raced keenly on her reappearance when a tailed-off 2-1 favourite for the Gerry Feilden at Newbury in November.

Henderson said: "Marie's Rock wasn't very satisfactory at Newbury as she pulled far too hard. She needs to settle down in her races and I hope through the work we've done with her she will.

"We've put a hood on her here and various other contraptions to help but she's shown she can settle at home. Now she needs to do that in the race."

The Gerry Feilden was won by Marie's Rock's stablemate Floressa, who reopposes as the pair form the backbone of another enviable Saturday squad for the six-time champion trainer.

Floressa, winner of four of her nine starts, found the pace too hot in the Christmas Hurdle at Kempton last time but returns to a race in which she finished second to Lady Buttons last year.

Henderson added: "Floressa is very adaptable and bowled along up front at Newbury and did the job very well in the Gerry Feilden. That was a very pleasing performance."

Phil Kirby, trainer of Rayna's World
The trip might be on the short side for her now but this should give us a good indication of where we should go next. We'll know whether two miles is a definite no and that we should stick to two and a half from now. However, soft ground and a bit of a test should be good for her.

Paul Nicholls, trainer of Miranda
She ran very well at Musselburgh last time when she didn't get the best run up the straight and was beaten only a length and a quarter. This is much more of a galloping track and therefore should suit her better.

Phil Middleton, trainer of Sopat
We're flying high with her but I think it was a nice horse she beat at Fakenham. He beat a horse of Henry de Bromhead's in a point-to-point who then went out and won a maiden by 15 lengths. She's been giving us a great feel since Fakenham and this looks an interesting race. Her point-to-point trainer was very sweet on her and she's related to some very smart types. She really does jump and I think she's actually well suited to Doncaster. She's a lovely mare and you never know she could go and nick it, stranger things have happened.

Lucinda Atkinson, owner of Irish Roe
She bounced back with a good run in a jumpers' bumper last time and we were not surprised by the two runs before because she struggled in the ground. She's run well on soft ground at Doncaster before though and really has been a horse of a lifetime for us.

FIRST PUBLISHED 6:00PM, JAN 29 2021
This is much more of a galloping track and therefore should suit her better