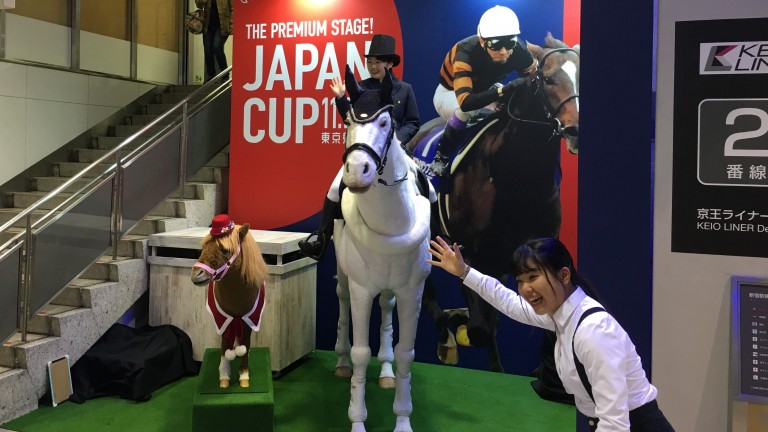 For the first time since its inauguration in 1981, the Japan Cup will have no international horses. This is bad news for those marketing the 39th running but also for some of the hardy souls who have been queuing outside Tokyo racecourse for a week.

It is Thursday evening in the Fuchu suburb of Japan's capital city. At least 50 fans are already waiting outside the track's main gates. One of them gets very excited when approached by the Racing Post and immediately starts preparing a cup of sweet tea for the visiting Englishman.

Kenji Yoshida is sitting with two other members of the line, Michiko Takarada and Lisa Wilson. They each belong to a different group within the queue. Inside the groups a rotation system operates. Some spend the day here, others do the night shift, supported by sleeping bags and a devotion to racing that makes Japanese fans uniquely wonderful. 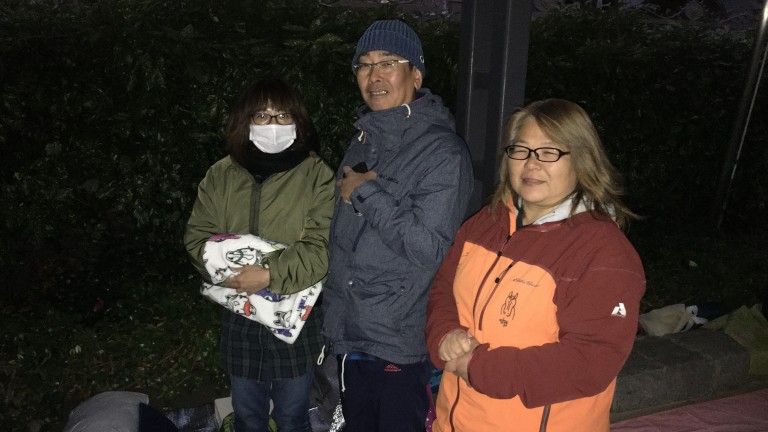 Michiko Takarada, Kenji Yoshida and Lisa Wilson settle down for another night waiting for the Japan Cup
Lee Mottershead

"I have been here for one week," says Kenji. "If we just came on Sunday we would have no chance of getting the best positions."

For Kenji that position is a spot overlooking the winning post. Michiko will sprint elsewhere when the gates open on Sunday morning. After stating where it is she offers a truly deep and meaningful reason for following racing.

"I want to have the best spot in the paddock to see my favourite horses and to take pictures," she says. "In the paddock I can see them more closely than I could if I was at the winning post.

"The horses are cute and pretty. I see them as a shadow of my life. Sometimes the horses run well and sometimes they run not so well. They have good days and bad days. It is like my life."

The Japan Cup represents an important annual stopping point in her life. Kenji feels the same. Lisa, however, is not necessarily here for the sport.

Here’s another example of the Japan Cup advertising that’s all over Tokyo.
This is the mad but marvellous Shibuya Crossing (think Piccadilly Circus with more people but without London buses) where a film plays out promoting the race. pic.twitter.com/hcpNxtGQRT

"I'm not really into racing," she says, explaining: "I love the lead ponies." The lead ponies are generally retired racehorses. Two of them accompany runners to the start and are often called upon to soothe fractious thoroughbreds. Lisa cannot get enough of them. She also has a very understanding American husband.

"We moved to near the racecourse last year so I could be close to the lead ponies," she says with a slightly embarrassed giggle before Kenji offers heartfelt parting words.

"I like racing because, for me, it is a sport with no borders," he declares. "Racing is very international. That is why we love it. We hope with our hearts there are international runners next year."

So does the Japan Racing Association. No horserace is promoted in a city like the Longines-backed Japan Cup is promoted in Tokyo. At Shibuya Crossing, a bigger, bolder, madder version of Piccadilly Circus, a film advertises the race on a loop. Spin on your heels and you see numerous Japan Cup posters and billboards. They are everywhere and contain the flags of Britain, Ireland, the United States, Australia, Italy and Germany, highlighting that this is the race in which Japan welcomes the world. Except this year.

"It was too late for us to change the advertising," says Hideki Abe, team manager in the event promotions section of the JRA. There is, however, more than one way to sell a race. At the busy Shinjuku station there is a lifesize robot horse and a smaller robot pony. The big lad moves his head and whinnies on a regular basis. Although nameless, he is a hugely impressive sight, as one would expect, given he cost the JRA around 10 million yen, which is roughly £70,000 or €80,000. Many a Group 1 winner has been bought for much less.

The Japan Racing Association spends a lot of money on marketing and the money isn’t always spent in conventional ways.
This robot horse cost more than many Group 1 winners and certainly caused a stir at Shinjuku Station. pic.twitter.com/JSPJAkvqXX

"At first, people think this must be a real horse," admits Abe, as one station user after another stops to stroke the beast, on whose back a model smiles, waves and no doubt wonders what on earth her agent was thinking.

"One of our challenges is to attract new fans," says Abe. "We have to use eyecatching ways to do that, so we spend a lot of money. We are really proud of the facilities we have at our racecourses. We believe if people come they will enjoy themselves. The challenge is how do we get them to the racecourse?

"Until about 20 years ago there were no systems for people to bet online. People had to come to the racecourse or a betting shop to place a bet. Now they can bet on the internet. For that reason attendances at racecourses are decreasing but the number of people betting on racing is not decreasing."

Attendances have indeed slumped. The first Japan Cup was seen by 89,200 customers. In 1995 an astonishing 187,524 screaming men and women filled the enclosures. Last year 98,988 people hailed Almond Eye's triumph. With the crowd-puller this year heading to Hong Kong, the JRA will be thrilled if something approaching 100,000 racegoers come to see a 15-runner prize that lacks international horses but not international jockeys. 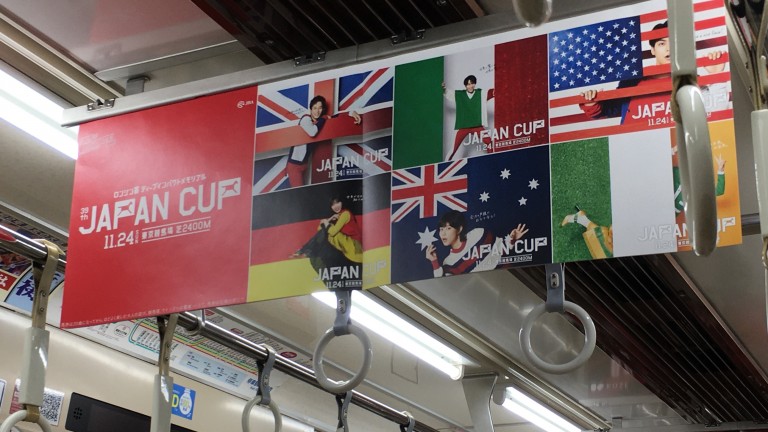 Advertising for the Japan Cup is everywhere in Tokyo, including on the city's trains
Lee Mottershead

"It's wide open and eight or nine of them could win," says Murphy, who assesses the contenders with the aplomb of a Racing Post Spotlight writer.

"Suave Richard has good form and feels super in his gallops. Most horses, even milers, couldn't produce the times he does in his workouts. He is consistent on the track but his work is unbelievable.

"Plenty of people think Wagnerian is most likely to win but everyone is talking about You Can Smile as well. Cheval Grand worked very well on the grass with Soumillon this week. I know he was a little disappointing in Europe but we never really went fast enough or far enough for him. Rey De Oro has been a good horse, he has a brilliant trainer and Will could get the best out of him, but I wasn't too inspired by his gallop the other day."

At big prices, Murphy also likes Yutaka Take's mount Makahiki. "He gets back in his races but has the quality to be there or thereabouts," says a man who adores horseracing in Japan. The happy folk in the queue feel the same.

FIRST PUBLISHED 6:00PM, NOV 22 2019
Sometimes the horses run well and sometimes they run not so well. They have good days and bad days. It is like my life

No July Cup bid for Campanelle as Wesley Ward takes US raiders back home 'It'd be great for racing' - Stradivarius team raring for Subjectivist rematch Listed success for Katara rounds off a memorable weekend for Ryan Moore 'I didn't say that. He's wrong' - Dettori counters Murphy best-horse claim A day when two big decisions had to be made - officials at Ascot got both right Did the stewards get it right in the Commonwealth Cup? Experts have their say