A horse, a bell and a message of hope for the festive period 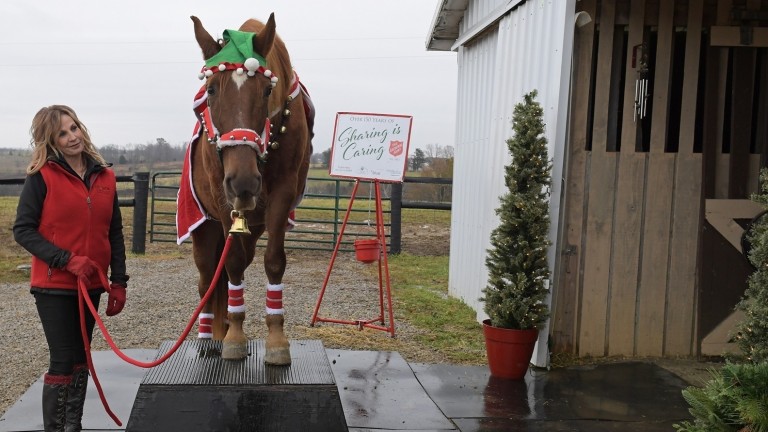 The warm tones of a golden bell ring out through the Kentucky countryside, pealing from a cosy barn decked with multi-coloured lights and evergreen boughs.

On a late November morning a few days before Thanksgiving in the USA, it's practice time for Hank, a gentle giant of a horse, and his handler, Tammi Regan.

Hank arches his neck to pick up the bell Regan offers, and nods his head to create the sound – sweet, selfless tones rung for the Salvation Army's Red Kettle Campaign, which helps provide shelter and meals for the homeless and hungry, Christmas toys for children and social service programmes.

Busy holiday shoppers may be taken aback by Hank's unexpected presence outside their local mall, but they quickly warm to the 17-hand Tennessee Walker, who is decked in sleigh bells, multi-coloured lights and a fetching elf hat.

The nine-year-old gelding was trained to ring a bell to fulfil a promise made by Regan to her late father, Duane Regan, who died unexpectedly in February 2015, four months after his daughter's unique pledge.

Last year on her father's birthday, she brought Hank to the Mall at Lexington Green to ring a bell in public for the first time.

"I felt kindness and compassion, and saw it in everyone around me as Hank inspired them to give," Regan recalled. "I knew we were really on to something.

"Then they would drop money in the kettle and the parents would bring their kids over and thank Hank. That made me cry. Hearing the littlest child say 'Thank you, Hank,' while petting his nose – that brought out a lot of feelings." 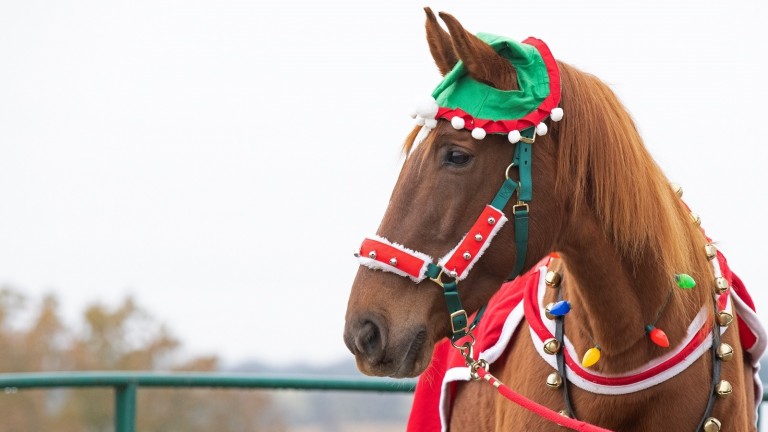 In October 2012, Hank had been neglected and left to starve. Regan sprang into action when she saw him standing alone in a field, his basic needs unmet.

A lifelong animal lover, she'd never owned a horse, let alone rescued one. As she cared for Hank, then a three-year-old, her nurturing tendencies blossomed in a new direction.

"I've always had a heart for animals, but this was my first journey into rescuing a horse," she said. "Hank is proof that all horses are worthy of love, care, and a second chance.

"From the moment I met him, I knew my life had changed. I went on an immersion journey to learn about horses and caring for them. I particularly took an interest in nutrition because that's what Hank needed at the time."

It took months to rehabilitate the weary gelding, and even longer to begin the path that led to a place beside the Christmas tree outside the Mall at Lexington Green.

"Hank needed life skills. There were people who even told me to put him down, who thought he was dangerous for me. We were kicked out of clinics because of his antics, but I saw his personality and thought, 'This horse has a great sense of humour!'

"I wanted to embrace his cleverness. That's how I came across trick training, because I couldn't ride him yet. I started learning about partnerships and relationship-based training, and learned to communicate with him effectively."

Now Hank teaches beginners to ride, and his softest spot has been revealed.

"Hank just has a special side of him that loves children. He's so gentle with them," Regan said. "When he's working with kids, that horse will not act up. He is 100 per cent there for that child. He's really amazing that way."

The next chapter for Hank was one that thrust him into the brightest spotlight yet – his Salvation Army campaign.

"I got turned down a lot," Regan said. "People didn't really feel confident about a horse ringing the bell. But I knew Hank could have a big impact on the community and kids in need.

"I became very focused on training him for big crowds, the clamour of Christmas music, people all around him. He trained for about six months. Our friends at the Lexington chapter of the Salvation Army were some of our biggest supporters, and we were able to make it happen thanks to Lexington Green." 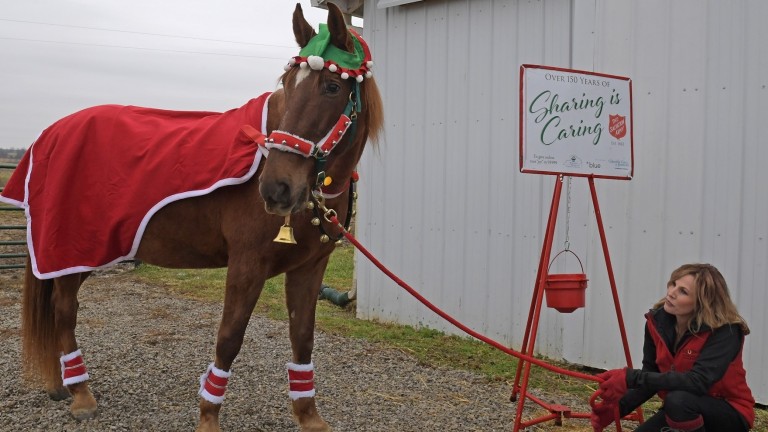 Duane Regan, a Vietnam veteran and Kentucky native, rang the bell for the Salvation Army every season. The organisation once put food on the table and clothes on his back, helping his family through tough times, and he wanted to give back.

His legacy lives on through Tammi and her sister, Victoria Clark. Clark and her husband Thomas serve as ministers at a Salvation Army church in Coshocton, Ohio.

"My dad taught us about our mortality at a young age," Regan said. "He taught us to leave our footprint and to follow our dreams.

"Last year it was very special for me to see the promise I made come true, and this year we have a chance to make a global impact. To think a playful little promise to my father could turn into a global inspiration of giving. Tthat's something my dad would be so proud of."

Regan's mission this season is a simple one. "I want to raise as much as I can to help tackle homelessness and hunger, and to support the Salvation Army's youth programme," she said. "That's the wonderful thing about the Salvation Army. There are multiple opportunities to donate to areas that resonate with everyone."

For specific times, check his Facebook page. If you're not in Lexington you can still make a difference by donating to Hank's online kettle.

You can also vote for Hank's decorated kettle on the Lexington Salvation Army's Facebook page as part of their Creative Kettles campaign.

The top five kettles, determined by the number of votes and donations each one receives, will be revealed at Fayette Mall on December 14.

"I know a lot of eyes are going to be on Hank this season," Regan said. "I'm super proud of him. He's so willing and generous in spirit. This is his moment to shine."

FIRST PUBLISHED 6:44PM, NOV 28 2019
They would drop money in the kettle and the parents would bring their kids over and thank Hank. That made me cry