A day to focus the mind with festival clues in abundance

Andrew Dietz on some thrilling action from Sandown to Scotland

Nicky Henderson: pulled out Brain Power due to the ground, but runs unbeaten novice chaser Buveur D'Air instead
Martin Lynch
1 of 1
2:12PM, FEB 4 2017

When some of the sharpest minds in racing come together to activate a contingency plan, the decision warrants respect.

First the unbeaten novice chaser was surprisingly thrown into the Stan James Champion Hurdle reckoning as the lure of an open-looking championship race proved irresistible and a day later he was ushered into action in today's Betfred-sponsored Contenders Hurdle at Sandown, in which he is a late replacement for the McManus-owned Yanworth, who was ruled out following a minor setback.

The Listed race is one of the highlights of a day bristling with Cheltenham Festival pointers and Henderson will be seeking a happy conclusion to a tricky week – he pulled Brain Power out of contention yesterday due to the ground – in a race he and McManus have combined to win twice with Binocular, the first of which came en route to Champion Hurdle glory in 2010.

In a common theme throughout the Sandown card, Henderson locks horns with old rival Paul Nicholls as the champion trainer relies on two-time Grade 1 winner Irving, whose overall record has an all-or-nothing ring to it, in a four-runner contest that could develop into a straight shootout.

Colin Tizzard, the season's dominant trainer in terms of the big races, does have runners at the meeting but, with none of his A-team in action, there is a sense of a return to the old Saturday norm as Nicholls and Henderson also face off in the Scilly Isles Novices' Chase.

Another small field assembles for the day's only Grade 1 but there is no lack of quality among the five runners and the outcome should have a significant bearing on the JLT Novices' Chase at Cheltenham.

Nicholls is responsible for two horses with differing profiles. While Le Prezien looks a rock-solid proposition, there appears to be more untapped potential in Clan Des Obeaux, who left a lasting impression with an imperious display at Newbury in November. 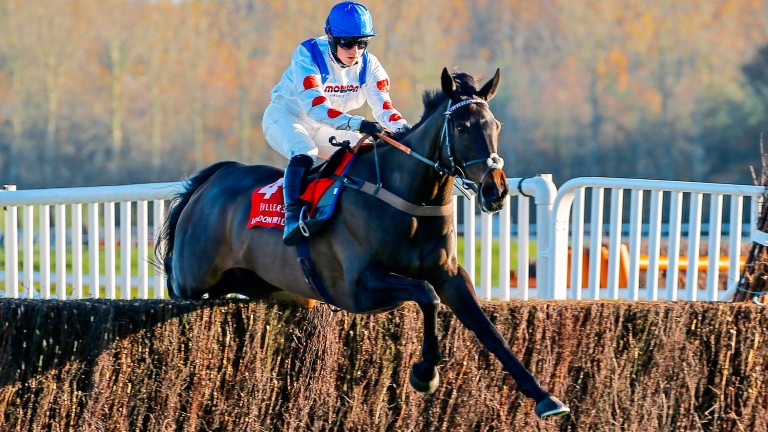 Clan Des Obeaux: pictured winning at Newbury, where he left a lasting impression
Mark Cranham
The five-year-old, who gets a 3lb weight allowance, lost vital momentum with a mistake at the second-last when finishing a half length runner-up to Whisper last time and is likely to be more at home away from Cheltenham's undulations.

Top Notch, who finished one place behind Le Prezien in a hot race at Uttoxeter won by Charbel at the start of the season, was a high-class hurdler for Henderson and has made a pleasing transition to fences with three victories since.

This Sandown fixture has suffered from the elements in recent years with an abandonment in 2012 and a switch to an all-chase card in 2014 and although strong winds and rain are forecast officials are not anticipating any problems.

While conditions in Surrey will be of the traditional winter variety, the prospect of good ground has helped Musselburgh attract some of the top southern trainers for the first day of its expanded Cheltenham trials weekend.

Top stayers Just A Par, winner of the 2015 bet365 Gold Cup, and Alvarado, twice placed in the Grand National and a runner-up in the Scottish equivalent last April, add a touch of class to the inaugural bet365 Edinburgh National and, depending on what happens at nearby Murrayfield as Scotland take on Ireland in this afternoon's Six Nations curtain-raiser, there could be a celebratory mood as trials for the Sky Bet Supreme and Albert Bartlett are staged tomorrow.

Elsewhere today, throw in the Grade 2 totepool Towton Novices' Chase at Wetherby where Nigel Twiston-Davies turns to Ar Mad's half-brother Calett Mad to follow up last year's victory with subsequent RSA Chase winner Blaklion and there are plenty of puzzles for punters to solve.

On days like this two heads are often better than one, but those closest to Buveur D'Air will be hoping five are even greater.

FIRST PUBLISHED 4:13PM, FEB 3 2017
There is a sense of reverting to the norm as Nicholls and Henderson also face off in the Scilly Isles Novices' Chase