The first of a quintet of race meetings geared towards point-to-pointers proved popular with trainers at Fairyhouse on Friday, and among a slew of short-priced winners, a couple of rank outsiders going in provided the headlines.

The father-and-son team of Eric and Conor McNamara provided the biggest-priced winner of the day when 80-1 shot The Brimming Water won the first division of a 2m4f maiden hurdle.

The son of Yeats was nibbled at 150-1 and, according to the winning trainer, was a horse who had shown a bit at home.

He said: "It's a pleasant surprise. Conor thought it rode an ordinary enough race, but this is a horse who showed us quite a bit a while back before he lost his way. But in his last two pieces of work he was seeming like he was coming back to himself, so hopefully he can go on a bit from this if the handicapper isn't too hard on him."

He added: "I don't think he needs the ground that soft, I think he will improve on better ground. He will definitely run over the summer and hopefully he can collect one or two more."

An hour after The Brimming Water's 80-1 success, 50-1 shot Tangental won the first division of the handicap hurdle.

JJ Slevin scored on the Fame And Glory gelding for veteran Kilkenny trainer Michael Butler, who was saddling his first winner since August 2018. 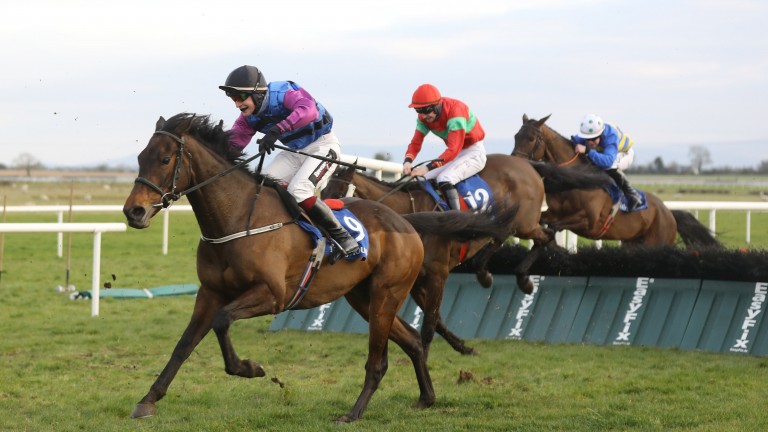 The McNamaras were not the only father-and-son team to hit the mark on the day. Armagh natives Stephen and Daire McConville landed division two of the handicap hurdle with 16-1 shot Boogily Lane, who returned to form after a couple of sub-standard efforts on his last two starts.

It was a first winner on the track for 23-year-old Daire, having ridden eight point-to-point winners.

On a day where quality was not that easy to find, the best horse on show seemed to come early when the Willie Mullins-trained Rambranlt'jac was a commanding winner of the opening division of the 2m maiden hurdle.

Under Paul Townend, the French-bred made all, jumped well apart from one mistake at the second-last, and pulled away nicely to account for Hamundarson by seven lengths.

"That was a nice performance, he was very professional in what he did and his jumping was deadly. He's a nice horse," said a beaming champion jockey.

FIRST PUBLISHED 7:00PM, MAR 5 2021
He will definitely run over the summer and hopefully he can collect one or two more