£50,000 payout: first men on the moon landed punts out of this world 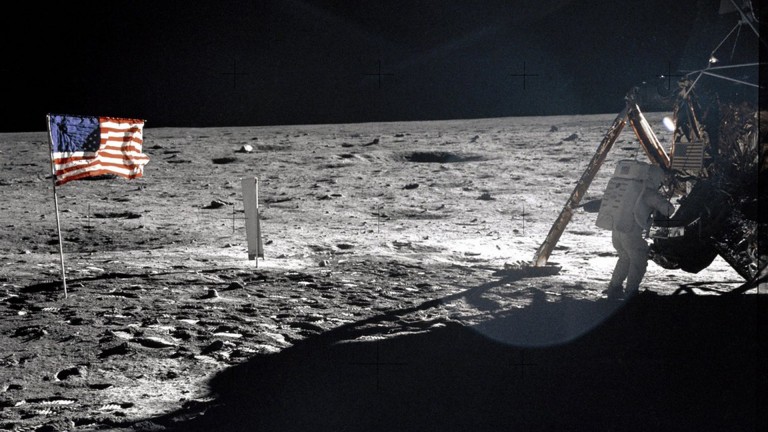 That small step for man was not just a giant leap for mankind – it also meant a handful of far-sighted punters hit the jackpot.

When Neil Armstrong made his famous pronouncement on this day 50 years ago, William Hill had to pay out £50,000 (more than £800,000 in today's money) on bets that man would set foot on the moon.

The first bet was struck in 1964, five years before the Apollo 11 mission, by David Threlfall, who was convinced President Kennedy's prediction of a successful moon landing before the end of the 1960s would come true.

"At the time, David Threlfall's bet was the first of its kind in British bookmaking history," said William Hill spokesman Joe Crilly. "No firm had ever taken a bet that was not sports related.

Taking a punt on unusual events has really taken off in the last 50 years, so much so that you can back your son to play for England or Tommy Fury to win Love Island – or even Boris Johnson to be Prime Minister.

But if you share Threlfall's confidence in space technology, William Hill quote 50-1 about man walking on Mars before 2030 and offer 1,000-1 that intelligent alien life is confirmed to exist before the end of next year.

Park Top
Less than a week after the Moon landing, the Duke of Devonshire's wondermare – the Enable of her day – took the King George VI And Queen Elizabeth Diamond Stakes at Ascot. Lester Piggott took over from Geoff Lewis after the five-year-old's narrow defeat in the Eclipse and brought her from last to first on the rail to beat Crozier and Hogarth.

Blakeney
Arthur Budgett owned, bred and trained the colt and had such faith in him that he backed him for the Derby at 100-1 in the winter of 1968. That confidence paid off the following June when Blakeney, an unlucky second in the Lingfield Derby Trial, powered home in front at Epsom under Ernie Johnson at 15-2.

Highland Wedding
Favourite backers were out of luck in the 1969 Grand National as Red Alligator fell at the 19th fence when seeking a repeat victory. But Highland Wedding was far from a no-hoper on his third crack at the race and landed the prize under Eddie Harty at 100-9.

Leeds United
Don Revie's Mighty Whites were a team of internationals from one to 11 and had amassed a record total of points when Billy Bremner lifted the Championship trophy in May. Liverpool were runners-up with European champions Manchester United only 11th.

Rod Laver
If bookmakers had offered odds on the four major tennis championships in 1969, Rod Laver would have been a pretty safe bet. Laver was the dominant player in the new open era and he won the lot, dropping only two sets in the four finals and becoming the first man to win $100,000 in prize-money in a year.

A fine servant to racing who began at Aintree and took his talents far and wide Royal Ascot target confirmed for impressive debut winner Get Ahead No more masks and back in the paddock - is good news for owners on the horizon?