1.40 Fakenham: The one race you cannot afford to miss on Tuesday

This competitive handicap has attracted three last-time-out winners in a seven-strong field, with just over £10,000 on offer to the winner.

Richard Spencer, better known for his exploits on the Flat, has done well with his runners at the track and is aiming to make it four wins from nine course runners.

The trainer's dual-purpose nine-year-old, Its’afreebee, is unbeaten at Fakenham, but has not won over jumps since December 2016 and is likely to come on for his first appearance since January.

Richard Johnson will be looking to break his deadlock with Brian Hughes at the top of the jockeys' championship aboard the Warren Greatrex-trained Encore Champs, who is eligible to run in this 0-125 contest after being dropped 2lb following his sixth at Newbury last month.

The five-year-old was only beaten ten lengths when second to the exciting Nube Negra at this course in October and the step up in trip is likely to suit.

Joint topweight is Eureu Du Boulay, who is returning to Britain following two runs over hurdles in France. He was disqualified at Auteuil after jockey Shane Quinlan took the wrong course early on, before winning by 18 lengths at Fontainebleau.

Kielan Woods is in fine form over the past fortnight with a 28 per cent strike rate (5-18). He partners Kilbrew Boy.

Volt Face is the highest-rated runner in the field on Racing Post Ratings (135), with Eureu Du Boulay next best on 133.

Warren Greatrex, trainer of Encore Champs
His first two runs we were just about getting a bit of education, he jumped well enough but was outpaced over two miles at Newbury. He’s always been a forward-going horse so we’re stepping him up to two miles five furlongs. He’s handled the track before and the mark is fair enough. Obviously he’s got to take on a few horses with more experience but he should be progressive over this sort of trip.

Richard Spencer, trainer of Its’afreebee
He’s not fully wound up and has got a long season ahead, so he’s going to improve, but it’s a good starting point. There’s nothing specific as to why our strike-rate is good here, but it’s local to us and we like to try and support the track. 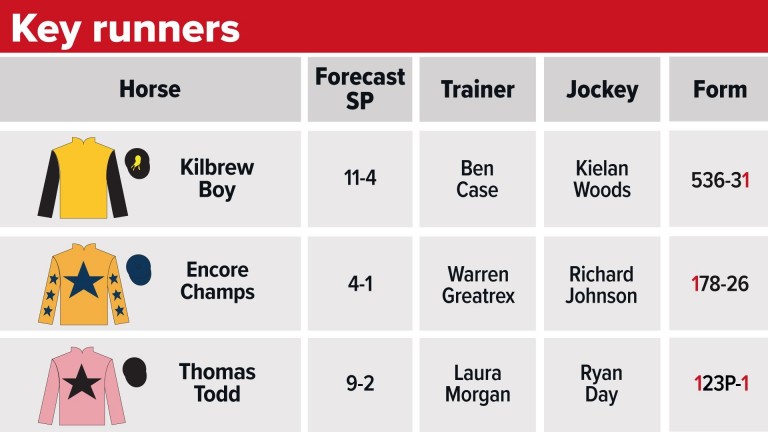 Paul Webber, trainer of Volt Face
He ran well here last season and ran consistently well all year without getting his head in front. I think he’s got a reasonable chance – he’s heading towards the Grand Military Gold Cup at Sandown in March, so this is his first stop.

Ben Case, trainer of Kilbrew Boy
I wanted to run him on reasonable ground and he’s run well at Fakenham before. It looks a tougher race but hopefully he’ll run nicely. He didn’t have a hard race at Wincanton and hardly came off the bridle. It is possibly a bit soon but the conditions suit and the horse seems really well within himself. He jumped a little bit out to the left at Wincanton and Kempton before, so hopefully going left-handed might suit him better.

James Evans, trainer of Nobel Leader
He ran free last time on his first run and just ran out of steam over the last two. Hopefully he’ll settle better and if he does, he’s got a good each-way chance. He’s going to have to produce a personal best.

FIRST PUBLISHED 6:00PM, DEC 16 2019
He’s always been a forward-going horse so we’re stepping him up to two miles five furlongs