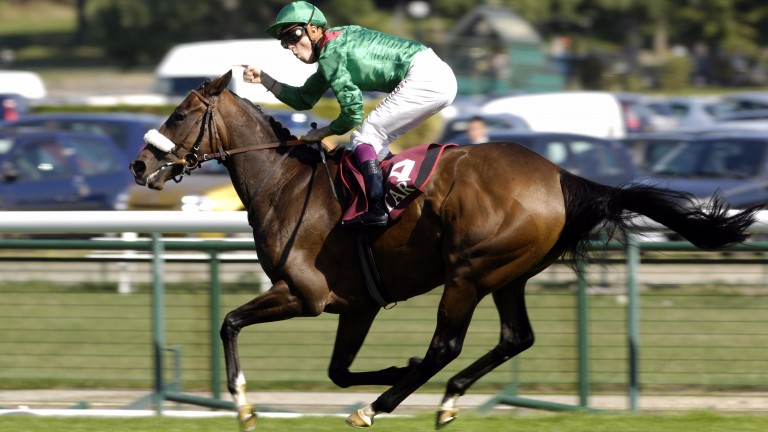 The Aga Khan's superb racemare and Group 1 producer Zarkava delivered her ninth foal in late March – a colt by Sea The Stars.

Only one of the 13-year-old's offspring aged three or over has made it to the racecourse, but that solo standard-bearer happens to be the Grand Prix de Saint-Cloud hero Zarak, who has embarked on his stallion career at the Aga's Haras de Bonneval in Normandy this year.

Considering Zarak's success, it is perhaps no surprise that his sire Dubawi has once more been chosen as Zarkava's suitor for the 2018 breeding season.

Zarkava, a daughter of Zamindar, was trained by Alain de Royer-Dupre to win all seven of her starts. The tally included the Prix Marcel Boussac, Poule d'Essai des Pouliches (beating none other than Goldikova), Prix de Diane and Prix Vermeille.

On this day of records, another of the Aga Khan champions, #Zarkava, turns 13. The 2008 Gr.1 Prix de l’Arc de Triomphe winner gave birth to a strong colt by the mighty #SeaTheStars earlier this week and will visit Dubawi. #racinglegend #happybirthdaychampion pic.twitter.com/SzJpgibErD

She rounded off her perfect record with a smooth two-length triumph over Youmzain and Soldier Of Fortune in the Prix de l'Arc de Triomphe.

Her first foal Zerkaza, a daughter of Dalakhani born in 2010, has a three-year-old filly by Exceed And Excel and a two-year-old colt by Oasis Dream of her own.

Zarkava has a three-year-old filly by Frankel named Zarkamiya and an unnamed two-year-old colt by Invincible Spirit, both in training with Royer-Dupre. Last year the mare foaled a filly by Siyouni.

Son of Zarkava dies after one season at stud in Argentina

Foal Gallery: take a look at the stars of tomorrow