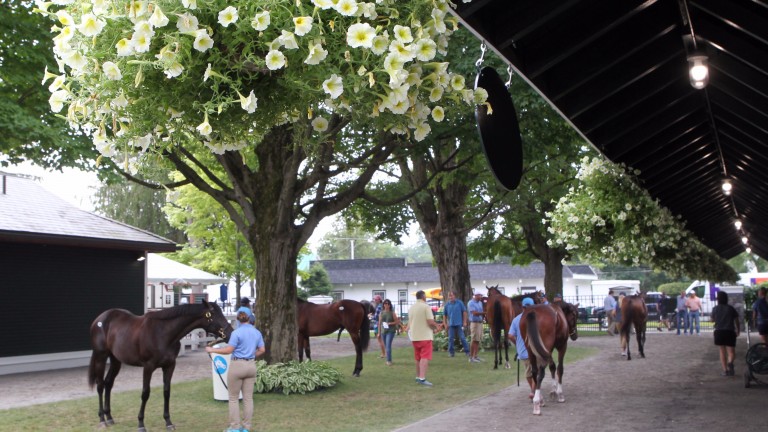 The sun did not shine on the picturesque sales grounds on Saturday but the action remained dazzling in the sales ring
Fasig-Tipton Photos
1 of 1
By Ron Mitchell of Blood-Horse 7:30AM, AUG 13 2017

They carried on where they left off at the select sale – though it must be said that the timing of the first session of Fasig-Tipton's New York-bred yearling auction in Saratoga could not have been better.

Shortly before the delayed start of the opening session on Saturday night, New York-bred Pure Silver remained undefeated in three starts after she rolled to victory in the Grade 2 Adirondack Stakes at the track, just down the street from the Humphrey S. Finney sale pavilion.

Though not herself a Fasig-Tipton sale graduate, the homebred Mission Impazible filly served to demonstrate the enhanced quality of horses bred in the Empire State – and that was vividly reflected in the ring.

Fasig-Tipton reported across-the-board gains in gross, average, and median prices, and a decline in the buy-back rate.

"We hit the trifecta once again tonight from a sales perspective," said Fasig-Tipton president Boyd Browning. "Average was up, median was up, and the RNA rate was down. There was tremendous activity on the sale grounds yesterday and tonight, and a noticeable improvement in the horses, in terms of physicals and conformation.

"It certainly helps, on one of the busiest weekends of the year at Saratoga, to have a New York-bred two-year-old win a Grade 2 race. It just further cements the ability of New York-breds to compete at the highest levels." 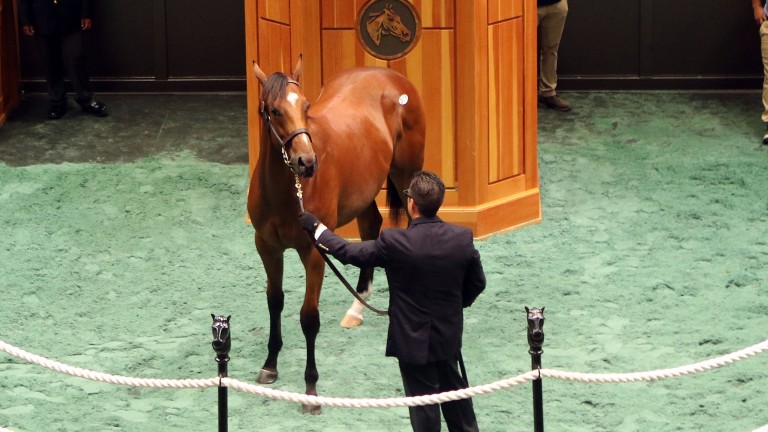 This City Zip colt, topping the session at $350,000, kept his recently deceased sire's name in lights
Fasig-Tipton Photos
Browning said the lucrative financial incentives provided by the New York Thoroughbred Breeding and Development Fund to owners of New York-bred horses are a factor in the health of the sale.

"This programme creates, not a sense of security, but there is some underfooting with the restricted races that supplement the increased quality," he said. "That make this a pretty unique marketplace."

For the second year in a row, weather impacted the start of the two-day auction, a late afternoon thunderstorm resulting in a delay to racing at Saratoga. To accommodate those attending the races, Fasig-Tipton moved the start back by 30 minutes.

Last year the first session of the auction was postponed a day after a line of thunderstorms uprooted a tree in the stable area and flooded some stalls.

Once the action got underway this time, trade was vibrant throughout the night. Once again, the end-users, pinhookers, and agents who pushed the select sale last week to near-record levels were pushing hard in the market.

"We got what we wanted tonight," said John Ed Anthony after he bought a First Samurai colt (Hip 439) for $220,000 in the name of his Shortleaf Stable. "I was here for the (selected) sale, and we got blown out of the water. We didn't even get a bid in."

Topping Saturday's session at $350,000 was a son of the late stallion City Zip, bought by agent Mike Ryan on behalf of Kindred Racing.

Consigned as Hip 371 by Indian Creek, agent, the May 27 colt was bred by James Lamonica, Lee Sacks, and Soave Stables, and was a $240,000 purchase in the name of Osprey Bloodstock at the 2016 Keeneland November breeding stock sale.

Out of the unraced Jump Start mare Nick's Honor, the bay colt is a half brother to four stakes horses, including multiple stakes winner The Lewis Dinner and stakes winner Kelli Got Frosty.

"He moves like a good horse," Ryan said. "Everything about him: the size, dimension, strength, quality. I thought he was pretty complete. I thought he was the best horse in this sale. I've never seen a City Zip with the dimensions this horse has—the scope, the power, the physique, the sheer strength. And he's handsome to go with it."

Ryan said the colt was bought on behalf of a client based in Minneapolis who is "developing a quality racing stable... He's not new to it, but he's new to racing in New York."

On behalf of client Vineyard Ventures, the day's top purchaser, Ryan purchased four yearlings for total receipts of $710,000, including the second-highest priced offering of the day, a Maclean's Music colt who exited the sale ring for a final bid of $275,000. 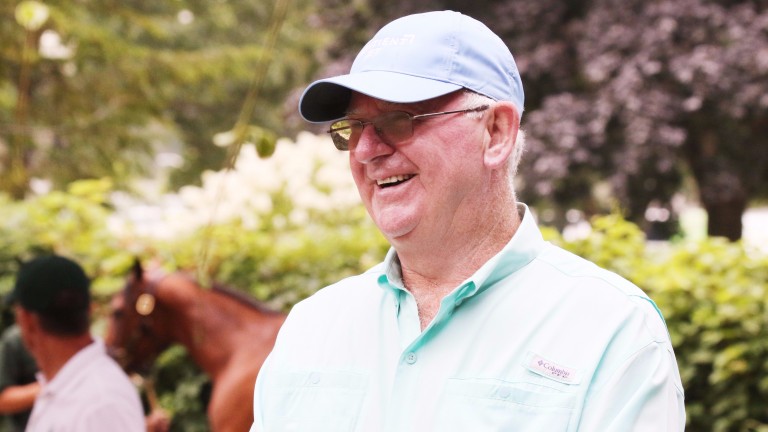 Offered by Vinery Sales, agent, as Hip 357, the colt was bred by David Kamp and Dr. Patricia Purdy from the extended female family of Canadian champion Diva's Debut and Canadian Oaks winner Capdiva.

Ryan said Vineyard Ventures is the nom de plume of an unnamed, long-standing client of trainer Chad Brown and that he was attracted to the colt primarily because of his sire, whose progeny from his first crop include this year's Preakness Stakes (G1) winner, Cloud Computing. Trained by Brown for Klaravich Stables and William Lawrence, Cloud Computing was purchased by Ryan as a yearling for $200,000.

Top filly price for the session was the $270,000 bid from Robert Masiello for Hip 428, a chestnut sired by Union Rags. Consigned by Hunter Valley Farm, she is out of the A.P. Indy mare Seattle Society, the dam of grade 3-placed Society Beau. Bred by Mares Rule III, the filly was purchased from the 2016 Fasig-Tipton New York Saratoga mixed sale for $70,000 in the name of Central Bloodstock.

With all nine horses offered sold for $1,031,000, Indian Creek was leading consignor on the day. Poignantly, City Zip was leading sire with three sold for total of $650,000.

For more news on US racing, sales and bloodstock visit bloodhorse.com