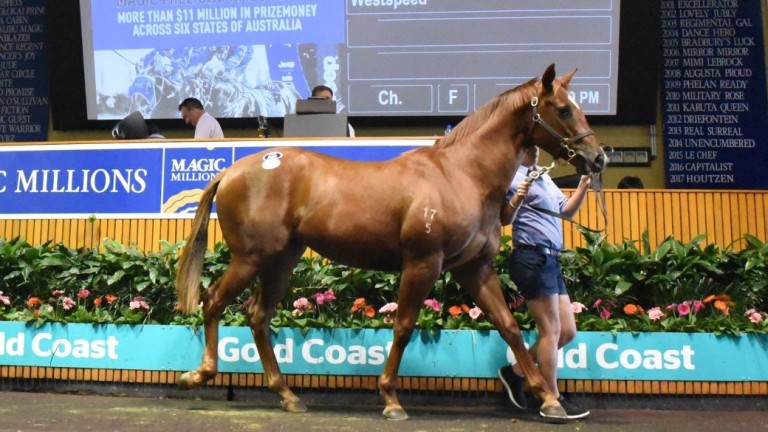 "Physically she was the filly of the sale," Blaxland reported. "She looks a real two-year-old.

"She's an out-cross and Aquis is really happy to be supporting Kris Lees with their first horse together.

"The sire is doing a wonderful job and on the market at the yearling sales for the past 12 months, when compared to other fillies of similar quality, she looks great buying," Blaxland added.

The filly is the second foal of the winning More Than Ready mare More Black Magic.

A winner over the minimum trip, More Black Magic is from the Gimcrack Stakes winner Ebony Magic, and hails from the family of the Group 1 winner Covertly.

The next four most expensive lots on the day were purchased by two buying groups – Dubai's Phoenix Thoroughbreds and Acing Lead, Little Kwok Hing Hung and Bahen Bloodstock.

Phoenix Thoroughbreds, bidding through David Lucas, secured the exceptionally bred More Than Ready filly out of Quaintly from Highgrove Stud for A$280,000.

Offered late in the day, the good-looking filly is the second foal of her dam - a Group-placed daughter of Giant's Causeway - from the family of international Group 1 winners Jade Robbery and Gold Dream.

The other top-five purchase for Phoenix Thoroughbreds was a Zoustar colt out of Jersey Lily from Baramul Stud. They ended the sale as leading buyer, with six lots for an aggregate of A$1,470,000 and an average of A$245,000.

Leading bloodstock agent Justin Bahen teamed up with Acing Lead and Little Kwok Hing Hung to secure two of the top-five lots, and the most expensive of those was Widden Stud's Sebring colt from the stakes-placed Fastnet Rock mare Epona Princess for A$250,000.

A little earlier in the day, they combined to outlay A$230,000 for a Dalakhani colt out of Dane Blazer from Aquis Farm.

However, with an extra 131 lots catalogued, the clearance rate fell from 85 per cent to 69 per cent.

"The other side of the story was a lower than acceptable clearance rate which is our own fault for allowing too much of a tail in Book 1.

"The National Yearling Sale has huge potential and it is our job in the next twelve months to tighten the catalogue so that our buyers are exposed to a consistently better product," Cox added.

Book 2 of the National Yearling Sale will get underway from 10am local time on Thursday, followed by the National Racehorse Sale.

FIRST PUBLISHED 1:01PM, JUN 7 2017
The other side of the story was a lower than acceptable clearance rate which is our own fault for allowing too much of a tail in Book 1