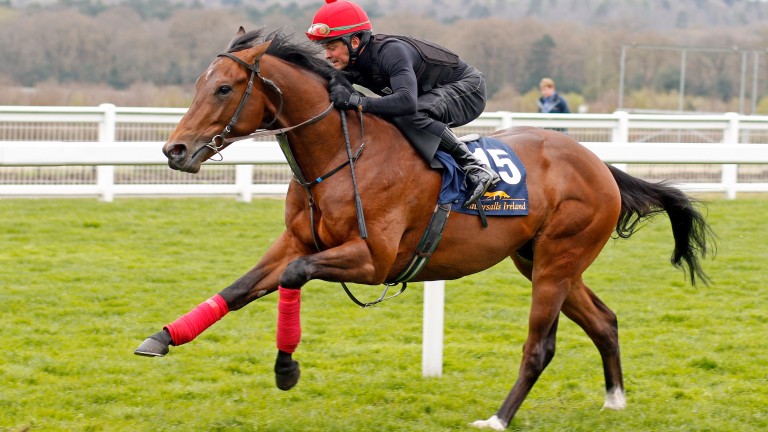 The sale-topping Worthadd colt stretches out in his breeze on Tuesday
Steven Cargill/Tattersalls Ireland
1 of 1
By Zoe Vicarage 7:39PM, APR 5 2017

Some things never change and a new European breeze-up season opened on Wednesday in highly familiar fashion, the top lot at the Tattersalls Ireland Ascot sale consigned by the doyen of the sector in Willie Browne of Mocklershill.

But if the next destination of a £130,000 Worthadd colt was likewise no surprise - he is on his way to the trainer who supervised the career of this sale's outstanding past graduate, The Wow Signal, in John Quinn - then one of the virtues of a breeze-up sale is that even youngsters by the least fashionable of sires get the chance to show that they can run.

Worthadd's first crop of juveniles is a small one, with just 19 registered to go to war for the Irish National Stud's rookie. But the first of them to gallop on a racecourse evidently made a big impression on Peter and Ross Doyle during Tuesday's breezes.

"He's a fantastic physical, a big strong horse who's probably not your typical breeze-up horse," Ross Doyle said. "But he looks like the type who has a future. I've seen a handful of Worthadds at the sales and he's the best by a mile. He breezed very well, looks to have a very good temperament - and coming from a top consignor is a big help."

Sure enough, it was from Mocklershill that Doyle bought Premio Jockey Club winner Ventura Storm for 110,000gns at the Tattersalls Craven Breeze-Up Sale in 2015.

Browne snapped up this colt for £35,000 at last year's Goffs UK Premier Yearling Sale. He is out of a dual winner by Dansili, her dam in turn a half-sister to both Inara, a multiple Group 1 winner in South Africa, and the dam of triple Canadian International winner Joshua Tree.

Worthadd covered 27 mares at a fee of €6,000 in his first season, the son of Dubawi having won the Italian Derby and finished second in the Lockinge Stakes.

Quinn will train his new recruit for Al Shaqab Racing, who bought The Wow Signal - purchased here for £50,000 in 2014 - after his runaway debut success at Ayr. The colt returned here to Ascot to win the Coventry before adding a Group 1 win in the Prix Morny.

Eddie O'Leary's Lynn Lodge Stud, consignor of The Wow Signal, presented one of the most coveted lots in the catalogue in a colt by Street Cry, the late sire of superstars Winx and Zenyatta.

A half-brother to the stakes-placed Force It, he is out of a daughter of dual Group 1 heroine Nebraska Tornado and was pinhooked from last year's Keeneland September Yearling Sale where he had been bought by Mags O'Toole for $50,000.

Standing with trainer George Scott, Alex Elliott had the final say at £100,000. "He's been bought for Sarah Spencer, an owner of George's," the agent said. "He came highly recommended from one of the best vendors around, who was very high on this horse when I went to Ireland last week.

"I ignored him when I last went over, and he told me about The Wow Signal - so I thought this time we'd better not ignore him!

"Any time I see Street Cry in the pedigree I love it. He's a big loss to the game and the colt is out of a young mare who has already produced a stakes horse. He's from one of the great Juddmonte families and I think we've got every shot."

"Of course, when buying a horse from a breeze-up like this you've got Royal Ascot ambitions," Scott admitted. "But we'll get him home and take it from there. I imagine he'll be racing sooner rather than later. He looks like he's been well prepped and I imagine we'll carry on in the same trajectory."

Scunthorpe United chairman Peter Swann is a familiar face at the breeze-up sales, his Cool Silk Partnership having landed the Norfolk Stakes with Goffs UK Doncaster graduate Prince Of Lir last year. Here Matt Coleman of Stroud Coleman Bloodstock landed a son of French sire Panis - another unfashionable name to make a virtue of the format - for £75,000 on his behalf.

Like Prince Of Lir, this colt was offered by Con Marnane of Bansha House Stables - who had purchased him for €20,000 at last year's Osarus September Yearling Sale.

"I like the way he breezed," Swann said. "His was one of the fastest times and he stuck on well on sticky ground for these sort of horses. This is a different sort of horse from Prince Of Lir, he has a bit more scope. We're going to send him to Richard Fahey."

Coleman's business partner Anthony Stroud, acting on behalf of Simon Crisford, went to the same price to secure a colt by Prince Of Lir's sire, Kodiac.

Consigned from the stallion's own residence, Tally-Ho Stud, he is out of a half-sister to Group 3 winner and Cheveley Park runner-up Aspen Darlin, from the family of smart sprinter Washington DC.

"He comes from a very good consignor and I thought he went very well in the breeze," Stroud said. "Simon bought [four-time juvenile scorer] First Selection here two years ago and he's going to the same owner."

Alastair Donald of SackvilleDonald was another to match the £75,000 price tag when he snapped up a son of Zoffany out of the winning Warning mare Flamenco Red.

Donald said: "He's been bought for a new owner with Andrew Balding. I'm very happy to have got him: he did a nice breeze, is a good physical and has everything you need."

The clearance rate also improved year-on-year, from 69 to 80 per cent, with 67 of the 84 lots offered finding new homes.