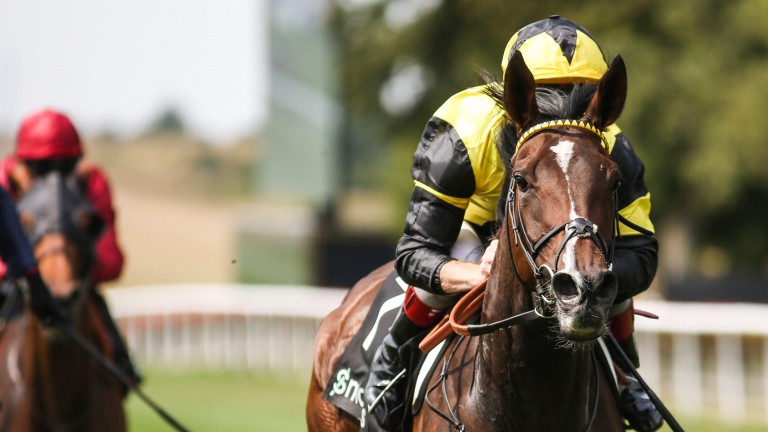 Worth Waiting: was successful on her first start in Pattern company in the Prix Minerve at Deauville on Sunday
1 of 1
By Aisling Crowe 6:16PM, AUG 12 2018

Worth Waiting lived up to her name at Deauville on Sunday as the three-year-old filly became the second Group winner by Juddmonte Farms’ exciting young sire Bated Breath.

Trained by David Lanigan for Saif Ali, Worth Waiting was a confident three-length winner of the Group 3 Prix Minerve over a mile and a half, stepping up from her Listed success at Newmarket on her latest start.

Bred by Whatton Manor Stud, Worth Waiting gets her stamina genes from her dam Salutare, a daughter of Sadler’s Wells who was victorious at distances up to a mile and seven furlongs. Salutare is a three-parts sister to Group 1 Prix Royal-Oak heroine Montare, by Montjeu, who is the dam of Dubawi’s Group 1 British Champions Fillies and Mares winner Journey.

Worth Waiting is one of 12 individual black-type performers and two Group winners by Bated Breath, a son of Dansili bred and raced by Prince Khalid Abdullah’s operation. Bated Breath’s leading performer so far is Beckford who won the Group 2 Railway Stakes at the Curragh last season and was second in the Phoenix and National Stakes, both Group 1 contests at the Curragh. Dansili was retired from covering duties at Juddmonte’s Banstead Manor Stud in Newmarket earlier this year.

Bated Breath didn’t begin his racing career until three and improved with age. A classy sprinter, he won the Group 2 Temple Stakes at Haydock and was also placed in the July Cup, Sprint Cup (twice), King’s Stand Stakes and Nearctic Stakes, all top-flight contests.

Bated Breath is a half-brother to Group 1 Dubai Duty Free winner Cityscape, a son of Selkirk who stands at Overbury Stud and it is the further family of multiple Group 1 winner and sire Xaar.

Retired to his owner-breeder’s farm in 2013, his oldest crop are now four, but Bated Breath went out of fashion in 2016 when his first crop ran and failed to deliver a Group winner. However he enjoyed a rise in popularity after Beckford’s exploits last season and his yearlings this year include some of his best bred runners to date.

Ballyphilip Stud consigns a Bated Breath half-brother to Venture, their sale-topper from last year’s Tattersalls Ireland September Yearling Sale, at this year’s renewal. Venture, who was purchased by Grovendale Advisory Services on behalf of Malih Al Basti for €230,000 is in training with Clive Cox. Their dam is the winning Invincible Spirit mare Starfly, a half-sister to seven winners from the family of Group 1 performers Malaspina and Marshall.

At the same sale Croom House Stud have a three-parts sister to Grade 2 winner Aviate and Early March, winner of the Prix la Rochette and second in the Prix Jean-Luc Lagardere, both by Dansili and bred and raced by Juddmonte Farms. It is also the family of Grade 1 Hong Kong Stewards’ Cup winner Giant Treasure, bred by Juddmonte, and Grade 1-placed filly Jibboom, who raced in her breeder’s green and pink silks.

Glidawn Stud are the vendors of a Bated Breath filly out of winning Selkirk mare Triple Sharp, the dam of five winners so far. Triple Sharp is a half-sister to Triple Threat, by Monsun, who won the Group 2 Prix Eugene Adam and was third in the Grade 1 Northern Dancer Turf Stakes. She is also a half-sister to Mrs Marsh, the dam of five-time Group 1 winner Canford Cliffs.

There are two sons of Bated Breath catalogued in the Goffs Orby Sale headed by a half-brother to a Showcasing colt who made €460,000 at last year’s sale.

Bred by Lady O’Reilly and consigned by her Holyhill Stud, the February colt is the third foal out of Roseraie, a daughter of Lawman who was placed in the Group 3 Silver Flash Stakes at Leopardstown as a two-year-old. She is the dam of last season’s Group 2 May Hill Stakes runner-up Dark Rose Angel, by Dark Angel, and her Showcasing colt was purchased by Godolphin.

Jamie Railton consigns a Bated Breath colt he purchased for €105,000 at the Goffs February Sale earlier this year. The colt was bred by the Niarchos Family and consigned by Norelands Stud at the February Sale and his year older half-brother by Maxios made €135,000 at last year’s Orby Sale.

They are the second and third foals out of the Giant’s Causeway mare Modesty’s Way, successful in France at three and a granddaughter of dual Group 1 winner Chimes Of Freedom. She is the dam of Grade 1 winners Aldebaran (the sire of US champion turf horse Main Sequence) and Good Journey, and half-sister to Group 1 winner and sire Denon and the dam of elite winner and sire Spinning World.

FIRST PUBLISHED 6:16PM, AUG 12 2018
Worth Waiting is one of 12 individual black-type performers and two Group winners by Bated Breath