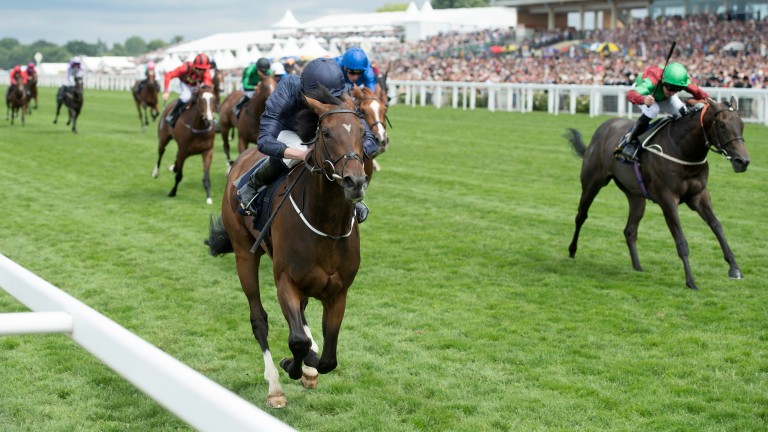 International breeders are ratcheting up their interest in Deep Impact, the son of Sunday Silence who has reigned since 2012 as the world’s leading sire by progeny earnings.

In the strongest show of support for the 15-year-old stallion who has sired Group 1 winners in France, Dubai and Hong Kong as well as 27 elite winners in Japan, Coolmore sent three Galileo mares who are full-sisters to outstanding European runners to his court this season.

Coolmore representatives David O’Loughlin and Dermot Ryan, who are attending the Japan Racing Horse Association select sale in Hokkaido, said the mares are Kissed by Angels, a Group 3 winner and sister to 2016 Cartier Horse of the Year Minding; Best In the World, a Group 3 winner and sister to Prix de l’Arc de Triomphe and Breeders’ Cup Turf winner Found, and Fluff, a winning sister to Moyglare Stud Stakes winner Maybe.

Kissed by Angels also visited Deep Impact in 2016 and she produced a colt from that mating on February 7.

Previously, Maybe delivered the now three-year-old filly Pavlenko and juvenile colt Saxon Warrior when bred to Deep Impact; Pavlenko is unplaced for Aidan O’Brien while Saxon Warrior, who was sent to Ireland as a weanling, has not started.

Shadai Stallion Station officials said that others sending mares to Deep Impact have included the Niarchos family and Alain and Gerard Wertheimer, although they said they could not release details.

“He’s the world’s leading sire by earnings, he’s an outcross and he has an international pedigree,” O’Loughlin said of Coolmore’s interest in patronising Deep Impact, who sired the global superpower’s September, winner of the Chesham Stakes at Royal Ascot, when bred to multiple Group 1 winner Peeping Fawn in 2014.

O’Loughlin noted that the Wildenstein family was among the first breeders outside Japan to send mares to Deep Impact and they were rewarded with 2012 Poule d’Essai des Pouliches winner Beauty Parlour from their stakes-winning Giant’s Causeway mare Bastet.

Ryan said that he and O’Loughlin are studying the Deep Impact offspring at the JRHA sale to see which mares produce the best physical types when mated with the stallion so that they can utilise the knowledge in planning future matches.

Prior to this season and in addition to Peeping Fawn, who also produced three-year-old Irish maiden winner Wisconsin when bred to Deep Impact, Coolmore had sent other mares to him including Cherokee, a Group 3 winner by Storm Cat. Cherokee produced the now juvenile colt Conclusion.

David Redvers, Sheikh Fahad’s bloodstock adviser, said while attending JRHA sale events that the sheikh will increase his presence in Japanese breeding with Pearl Of Africa and Circling. The former, a multiple stakes winner by Jeremy, foaled a Golden Horn filly on March 5 in Japan who is catalogued as Lot 366 in the JRHA sale, while Circling, a stakes winner by Galileo, produced a War Front filly in Japan on April 6.

Among other international breeders, Fudge has supported Deep Impact with several mares, including Grade 1 winner Miss Keller, by Montjeu, who was bred on southern hemisphere time in 2015. A 625,000gns acquisition at Tattersalls in 2011, Miss Keller produced a colt in August 2016 who was sent to Australia in February.

Meanwhile, Daylesford Stud’s Soinlovewithyou, a now 12-year-old Sadler’s Wells mare who is a half sister to Duke Of Marmalade and Ruler Of The World, produced Deep Impact fillies in 2015 and 2016 that were sent to Britain last October. The older filly was withdrawn from the Tattersalls Craven Breeze-Up sale this year.

Sheikh Mohammed bin Khalifa al Maktoum sent Unspoken Choice, a Giant’s Causeway half sister to Group 1 winners and sires Redoute’s Choice and Manhattan Rain, to Deep Impact and she foaled a colt in February 2016 who later was sent to Britain. His Encosta De Lago mare Zumoorooda foaled a filly in 2016 and a colt in 2017 by Deep Impact, and that filly also has been exported to Britain.

FIRST PUBLISHED 4:59PM, JUL 9 2017
He’s the world’s leading sire by earnings, he’s an outcross and he has an international pedigree