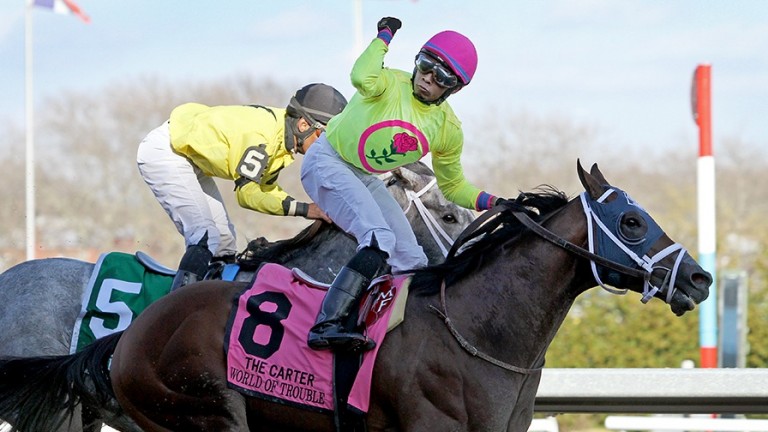 Manny Franco punches the air aboard World Of Trouble after their win in the Grade 1 Carter Handicap
Jessie Holmes / EquiSport Photos
1 of 1
By Ollie O'Donoghue 1:30PM, JUN 13 2019

World Of Trouble will stand at Hill 'n' Dale Farms alongside his sire Kantharos at the conclusion of his racing career.

The four-year-old went undefeated this year, including wins in the Grade 1 Carter Handicap on dirt and the Grade 1 Jaipur Invitational over the weekend on turf. He has won seven of his last eight races, all stakes, falling a neck short in the Breeders' Cup Turf Sprint as a three-year-old.

Current owners Michael Dubb, Madaket Stables and Bethlehem Stables, will race the colt through 2020, at which point he will be retired to stud. They will retain an interest in his stud career.

Michael Dubb, managing partner of World Of Trouble, said: "My partners and I are excited World Of Trouble will stand stud at such a world-class facility as Hill 'n' Dale.

"He's the fastest horse I have ever owned, by far, and we will look forward to continuing to run him in the best sprint races America has to offer.

"We're equally excited to support him at stud, and will start to assemble mares for the 2021 breeding season."

John Sikura, president of Hill 'n' Dale, said: "To watch World Of Trouble run is to see effortless brilliant speed on both dirt and turf at the highest levels of racing.

"He's so unique as a Grade 1 winner on both surfaces and is by Kantharos who is a rising star in the sire ranks. He has Seattle Slew, Blushing Groom and In Reality in his pedigree, so his entire pedigree page is replete with quality speed.

"World Of Trouble is completely correct and medium in size so he is compatible with every type of mare. Brilliant, consistent and versatile are great requisites for a new sire."

Trainer Jason Servis, who has saddled World Of Trouble in all eight of his stakes wins, added: "I'm looking forward to training some of his offspring. If I'd a mare, I'd want to breed to him with that speed."

BSW Bloodstock represented both buyer and seller on the stallion deal.

Daredevil pulls off his first stunt with winning juvenile at Hamilton

FIRST PUBLISHED 1:30PM, JUN 13 2019
He's so unique as a Grade 1 winner on both surfaces and is by Kantharos who is a rising star in the sire ranks