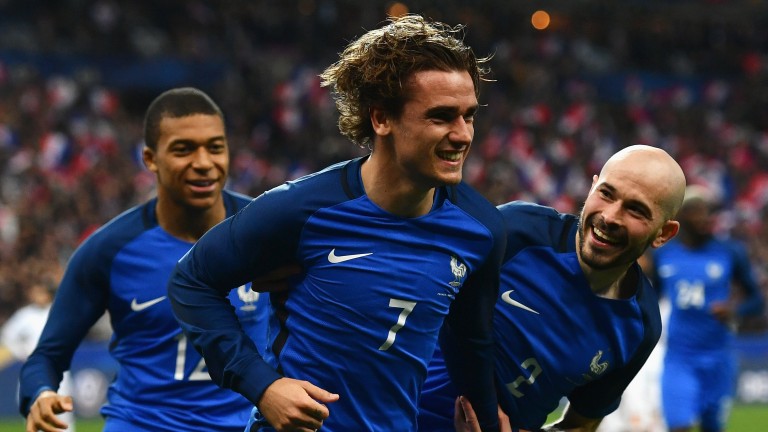 Boasting a Group 1 update, the American Post half-sister to recent Prix Marcel Boussac winner Lily's Candle lit up the Arqana ring during Thursday's session of the October Yearling Sale when going the way of World Cup-winning football star Antoine Griezmann for a session-topping €230,000.

Once the six-figure barrier had been broken a war of attrition ensued as Griezmann's trainer Philippe Decouz, standing ringside, traded miniscule increases with agents Marc-Antoine Berghgracht, who paced by the entrance to the ring on the phone, and Eric Puerari.

With gavel raised, auctioneer Eric Hoyeau gave the call "last chance" on numerous occasions, but eventually the underbidders' wills were broken and the hammer came down in favour of Decouz, who trains at Chazey-sur-Ain in eastern France close to Griezmann's hometown of Macon.

"She's a very racy filly with great limbs and a bit of stretch, and obviously the family has worked tremendously with American Post," said Decouz. "I just have to train her now."

The eyecatching purchase is not Griezmann's first, as the France and Atletico Madrid forward owns three two-year-olds outright and also has shares in Decouz's Group 3 Prix du Pin winner Tornibush. He has also secured four yearlings this sales season. 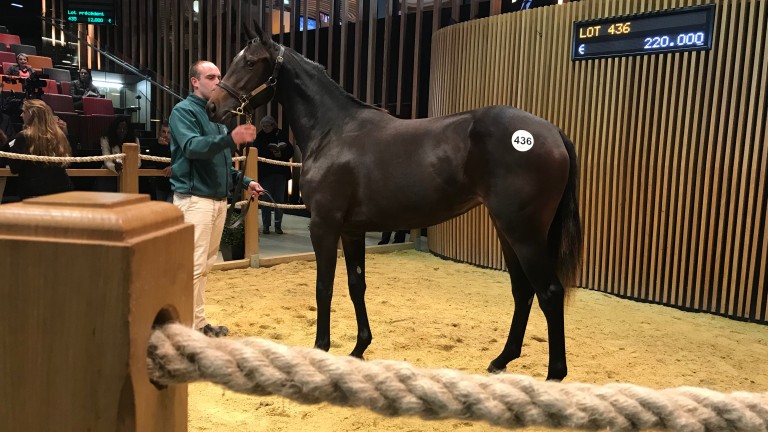 Thursday Arqana session topper
Alix Choppin/Arqana
"Unfortunately he was unavailable to come to the sale," Decouz said of his celebrity client. "Obviously he has a very busy schedule, but every time he's in France he comes to the yard, which is close to his family home. He's very fond of horseracing."

While the pressure may now be on Decouz, the sale brought a heady mix of elation and relief to the Lepeudry family of Elevage de Tourgeville, which is based slap bang between Deauville and Clairefontaine racecourse.

"All credit must go to my grandmother, Monique Lepeudry, as she and my late grandfather have bred six generations of this family," said Felix Lepeudry as he gestured towards the filly's catalogue entry. "We have nurtured the family towards this kind of success and we're very proud as this is our page."

American Post has clicked remarkably well with this family, with his two highest-rated runners by Racing Post Ratings – Robin Of Navan and Liliside – appearing beneath the yearling filly's second dam, Miller's Lily. 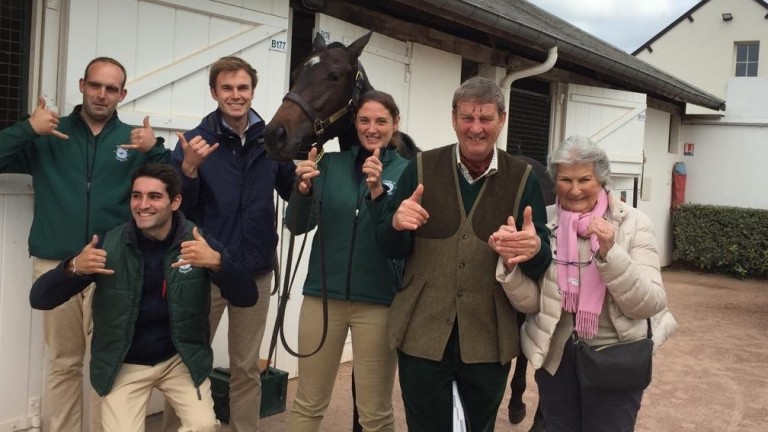 The Haras de Tourgeville team celebrate the sale in the style made famous by Griezmann
Alix Choppin/Arqana
"Going through so many fillies from the same page teaches us so much," explained Lepeudry, who has previously worked for Roger Varian and Newsells Park Stud. "We watch the way they behave while racing and how they develop. Golden Lily [dam of the €230,000 yearling] needs a small stallion and American Post was the right type.

"He nicks so well with this blood, I can't explain why, but you'll find inbreeding to Lyphard, Riverman, Mill Reef, stallions that my grandfather used to love. We're trying to look these things up when forming our mating plans."

The American Post filly out of Golden Lily may have topped Thursday's session, but the sum she fetched comes in marked contrast to her Group 1-winning half-sister's yearling price-tag, as Lily's Candle brought a winning bid of just €15,000. She was later resold to Martin Schwartz through Oceanic Bloodstock for €390,000 at the Arc Sale, less than 24 hours before winning the Prix Marcel Boussac.

The daughter of Style Vendome could provide Griezmann's purchase with a significant update next week, as she is due to line up in the Breeders' Cup Juvenile Fillies Turf at Churchill Downs next Friday.

"Golden Lily has been producing precocious, strong types but they never sold so well," said Lepeudry, who said the mare's Dariyan filly foal will be retained. "Perhaps now we will look at upgrading the covering sire next year and send her abroad. She's a beautiful-looking mare." 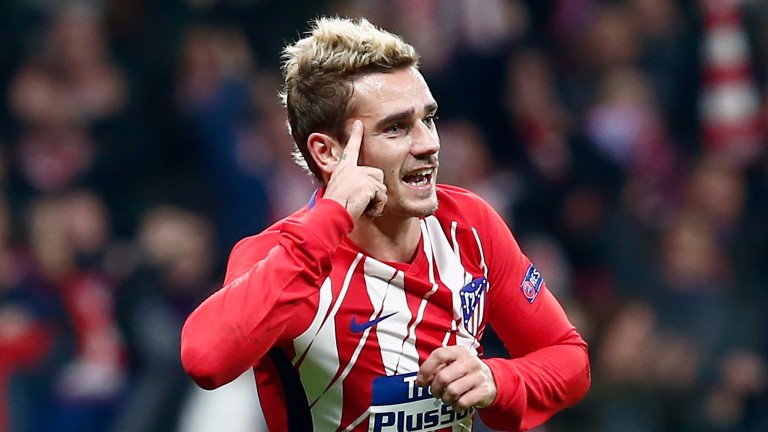 Lepeudry also explained that the purchaser of the filly was a source of much excitement for the Tourgeville team, as he added: "It's incredible to be involved with an owner like Antoine. When I tweet about my horses I get 25 likes, when he does it he gets two million! He's a superb advertisement for racing in France. His passion for the game is a beautiful example."

Griezmann is not the first footballing force to make an impact at the 2018 yearling sales, as Alex Elliott secured agent Kia Joorabchian a session-topping son of No Nay Never for 450,000gns at Book 2 of the Tattersalls October Sale.

Alex Elliott was among the British contingent still in action at Arqana, and he walked away from Deauville having added a €125,000 daughter of Wootton Bassett to his portfolio of French purchases.

Consigned by Haras de la Haie Neuve, vendor of Grade 1-winning Fatale Bere, the filly is out of the winning Elusive Quality mare Bye Bye Fuji and is from the further family of Melbourne Cup hero Americain.

"She's a gorgeous filly, we loved her," said Elliott. "She's going to go back to Ireland now and a decision regarding a trainer will be made in the new year.

"She just oozed quality and I like Elusive Quality as a broodmare sire. Wootton Bassett is very good too, and I think with all those attributes she has a chance of being a very good racehorse."

A previous October Sale graduate has shown Elliott's judgement in a positive light in recent weeks, as Master Brewer, who the agent purchased last year for €85,000, landed £121,680 in prize-money when the son of Reliable Man won the Arqana sales race earlier in the month, adding to his success in a Newmarket novice stakes.

The session-topper was not the only noteworthy lot to represent American Post on the day, as trainer Harry Dunlop and agent Matt Coleman teamed up to secure one of his sons offered by Haras d'Ombreville for €75,000.

The colt is a half-brother to Deja, who supplied his sibling with a big update when he landed a Pontefract handicap by a margin of three and a half lengths in the silks of Phoenix Thoroughbreds on Monday.

"This is a horse we've been keeping an eye for a couple of days," said Dunlop. "Matt Coleman knows the family well, he bought Deja [as a foal for €62,000], and we've obviously had a lot of luck with American Post through Robin Of Navan.

"He's been bought for a partnership of the owners of Jackfinbar and Fighting Irish, they all love coming to France and trying to win some euros. With the French premiums you have a chance of getting some of that purchase price back, it's a great incentive."

By the close of trade on Thursday 119 of the 153 offered lots had changed for a clearance rate of 78 per cent. That figure was down from the corresponding session in 2017, when 151 of 186 yearlings sold at a clip of 81 per cent.

The October Yearling Sale concludes on Friday, with the session starting at 11am local time.

FIRST PUBLISHED 6:01PM, OCT 25 2018
Every time he's in France he comes to the yard, which is close to his family home. He's very fond of horseracing