Workforce to return from Japan to stand at Knockhouse Stud 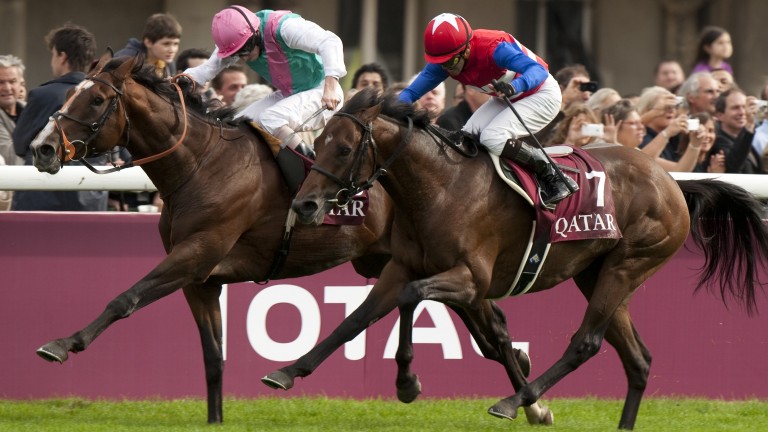 Derby and Arc hero Workforce will stand as a dual-purpose sire at Knockhouse Stud in County Kilkenny for the 2017 breeding season at a fee of €4,500.

A Juddmonte homebred, he was by 2,000 Guineas winner King’s Best out of the unraced Sadler’s Wells mare Soviet Moon, a sister to Racing Post Trophy and St Leger winner Brian Boru out of the Park Hill winner Eva Luna.

Workforce raced nine times throughout his career for Sir Michael Stoute, and won a 7f maiden at Goodwood by six lengths as a two-year-old. On his seasonal reappearance at three he was second in the Group 2 Dante Stakes at York, before winning the Derby by seven lengths from At First Sight.

He crowned his three-year-old season off with victory in the Prix de l’Arc de Triomphe where he saw off Japanese-raider Nakayama Fest by a head.

Workforce ran four times at four with his best efforts when second in the Group 1 Coral-Eclipse and the Group 1 King George VI and Queen Elizabeth Stakes.

The deal was brokered by bloodstock agent John McCormack with the nine-year-old bought back from a syndicate in Japan, who will retain shares in the stallion.

Sean Kinsella, owner of Knockhouse Stud, said: "He was a very decent racehorse. He’s a fine big strapping horse. He will be the first Derby or Arc winner to stand at Knockhouse Stud. It's a big step up in class and quality.

"He will put a lot of class into his runners, because he was a class racehorse himself. A big, strong, good-looking fella. He will give them plenty of power and acceleration. He’ll also give them size which is very important. He was well-supported in Japan and has big crops on the ground there."

Workforce will join Notnowcato at the County Kilkenny stud, who stands at a fee of €5,000 in 2017.

Kinsella added: "Notnowcato is doing exceptionally well. He is popular and covered a good book of mares this year. He has a great strike-rate for the numbers he has running."

FIRST PUBLISHED 11:00AM, DEC 10 2016
He will be the first Derby or Arc winner to stand at Knockhouse Stud. It's a big step up in class and quality