They also bred this year's US Triple Crown hero Justify 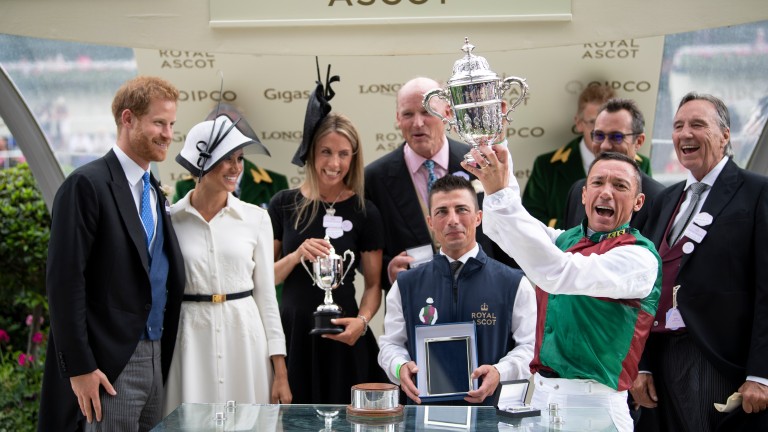 John and Tanya Gunther, ten days after celebrating being the breeders of this year's US Triple Crown hero Justify, came to the fore on the biggest stage once again as their homebred Without Parole claimed the St James's Palace Stakes at Royal Ascot on Tuesday.

The colt becomes another star to have been sired by dual world champion Frankel, himself a winner of this race in 2011, and takes the Banstead Manor Stud resident's tally of elite-level scorers to four alongside Soul Stirring, Mozu Ascot and Cracksman.

John Gunther said: "This is number one in anything I’ve ever done in my life - it was that important to me. To actually breed a horse and get it to Royal Ascot in a Group 1 and to pull it off, this is something I’ve dreamt about my whole life - it’s just incredible.

"I don’t think I could ever top the emotion of this day ever."

Without Parole is a half-brother to another of the Gunther's top performers in Tamarkuz, winner of the Breeders' Cup Dirt Mile at Santa Anita in 2016, and is out of Without You Babe, an unraced Lemon Drop Kid half-sister to Stay Thirsty.

John Gunther has been a regular visitor to Royal Ascot for the past 20 years and was in attendance at the royal meeting in 2012, when Frankel demolished the Queen Anne field to win the contest by a stunning 11 lengths.

On the back of that performance, Gunther was more than taken by the son of Galileo and decided to send Without You Babe to him.

He added: "The main reason is, when I went to Juddmonte to breed my mare to Frankel, she was an unraced mare and unproven at the time and I was really, really worried that they might not accept her and I wanted to go to Frankel, because I loved him so much.

"When Juddmonte gave me the nomination that meant so much to me, that was a big thing in itself and you just carry that thought all the way through and then to actually get to Royal Ascot after going through all that, it just all means to much to me. I just want to thank John Gosden and also Juddmonte for accepting the mare in the first place."

In December last year, following Without Parole's impressive debut win at Newcastle, Gunther confirmed that Without You Babe was to visit the Banstead Manor Stud resident again this year while she has a Dubawi half-brother to the Group 1 winner at foot.

FIRST PUBLISHED 5:44PM, JUN 19 2018
To actually breed a horse and get it to Royal Ascot in a Group 1 and to pull it off, this is something I’ve dreamt about my whole life

'I didn't sleep on Tuesday night' - Oisin Murphy rues the one that got away Bargain buys and a £4,000 sire in elite company among Royal Ascot talking points Forget the G7 and President Biden - the Queen gets back to the serious business Galileo's sons take centre stage as Australia's Point Lonsdale claims Chesham Time to hail the year of the veteran as experienced riders stay the course again Another proud sporting moment for Hearn family as Subjectivist strikes Gold