Wings Of Desire under consideration for Durban July bid 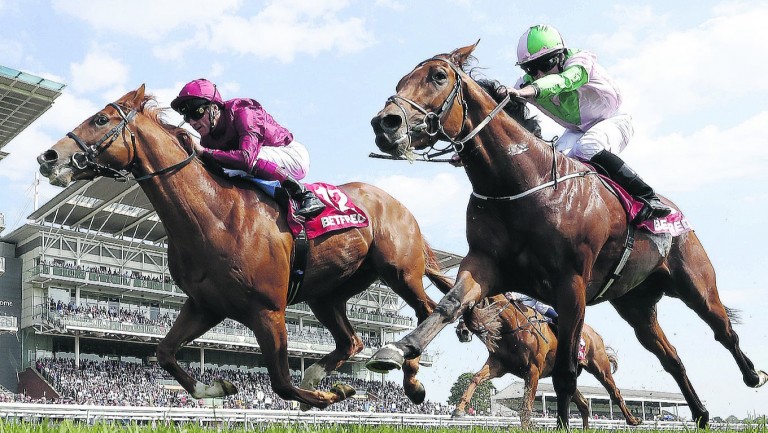 Wings Of Desire (left): will be entered in the Vodacom Durban July Handicap by connections
Alan Crowhurst
1 of 1
By Ollie O'Donoghue 6:00PM, FEB 15 2018

Wings Of Desire's connections are to consider running him in the Vodacom Durban July Handicap at Greyville before he takes up stud duties at Heversham Park Farm in South Africa later this year.

Trained by John Gosden in Britain for owner-breeder Lady Bamford to win the Group 2 Dante Stakes at York on only his third start in 2016, Wings Of Desire was purchased by Heversham Park in December, in a deal brokered by bloodstock agent Richard Venn.

The five-year-old son of Pivotal was also fourth in Harzand's Derby and subsequently earned a career-high Racing Post Rating of 119 for his valiant second to the year-older Highland Reel in the King George VI and Queen Elizabeth Stakes.

Heversham Park's Fred Brons told Turf Talk: "Although we bought the horse for stallion duties in 2018, he's only a lightly raced five-year-old and came out of quarantine in such good condition that we're considering sending him into training with Ormond Ferraris for a tilt at this year's [Durban] July Handicap.

"As runner-up to Highland Reel in the King George VI and Queen Elizabeth Stakes, we believe that his form is far superior to any horse currently racing in South Africa.

"The only difficulty we envisage is that the horse only came out of quarantine on Valentine's Day and this might not afford Mr Ferraris sufficient time to prepare him for the July. He will, however, be entered for the race and we'll make a decision on whether to run him at a later date.

"He will be commencing stud duties in 2018, regardless of whether he races in this country."

Wings Of Desire boasts a true Classic pedigree as a brother to the Royal Ascot scorer Eagle Top and Oaks third The Lark, out of Gull Wing, a Listed-winning half-sister to Pivotal's dual Oaks heroine Sariska.

Should Wings Of Desire win a top-level contest in South Africa, it would not be a first for his sire, who has also been responsible for Amanee and Noordhoek Flyer.