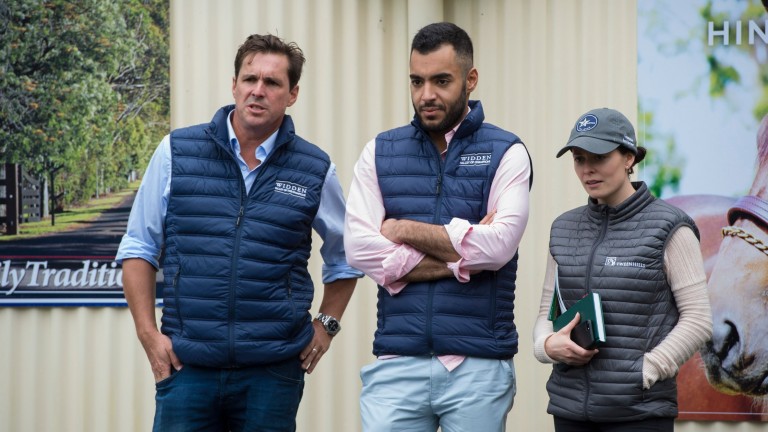 Breeders from around the world have spent the weekend scouring the grounds of Park Paddocks in an attempt to find the next blue hen at the Tattersalls December Mares Sale, which starts its four-day run on Monday.

One visitor has made an especially long journey on a specific mission. Antony Thompson, owner of Widden Stud in New South Wales, has made the trip from Australia to purchase mares to send to his stallion sensation Zoustar, who is shuttling to Tweenhills Stud in Gloucestershire for the 2019 northern hemisphere breeding season.

The son of Northern Meteor has made an explosive start to his stud career down under, with his coronation as champion first-season sire acting as the perfect precursor to an incredible feat at Flemington last month, when Zoustar was represented by the first three home in the stallion-making Group 1 Coolmore Stud Stakes.

That trifecta was spearheaded by the Tony McEvoy-trained Sunlight, the star filly landing the latest in a series of lucrative prizes that began with victory in the prestigious Magic Millions 2YO Classic in January.

“It's been such a phenomenal ride,” says Thompson of Zoustar’s stallion career to date. “To sire a Magic Millions winner in your first crop in Australia is the dream start. It doesn’t get any better than that.

“We always thought the Zoustars would improve from two to three and to see that unfold in the Coolmore was beyond our wildest dreams. To trifecta Australia’s biggest sire-making, three-year-old race at Flemington on Derby Day, that is it. It was an amazing day and a great thrill.

“The Coolmore trifecta is something that is really unique, only three stallions in Australia have ever done that in a Group 1 race. I dare say no other stallion has done that with his first crop.

“We have always had so much belief in the horse and for him to really deliver at every stage is incredibly satisfying.”

If there was any doubt surrounding his appeal to the northern hemisphere market, Zoustar’s compatibility with European mares has been demonstrated with great success in Australia through the exploits of Zousain and Zoustyle, two members of a first crop that yielded five stakes winners.

Zousain, three times a runner-up at the highest level and a Group 2 winner, is out of Irish Listed-winning mare Pasar Silbano, while the unbeaten Zoustyle hails from the German-bred Anabaa mare Fashion.

“The very few European mares that he has seen to date have been incredibly successful, and that instils more confidence in us that he’s not only working with the Aussie mares, but the ones from Europe as well,” adds Thompson.

“Everything he’s doing tells me that he will be a success up here, especially the type and temperament of horse he gets, with a lovely big, loose action.

Thompson has a clear strategy in place for finding suitable mares for Zoustar at Tattersalls this week – one that places significantly greater emphasis on quality over quantity.

“From our point of view we will only send half a dozen to breed to northern hemisphere time, but we want to find half a dozen of the right mares," he says. "I’d rather send more quality mares that I think I can mate right and breed a really nice horse.

“He doesn’t need the numbers, the response has been fantastic. Breeders in the UK have really jumped on the horse and the feedback we've had over the last few days, and since we announced it at Ascot, has been terrific.

“With a book limited to 120 mares, we’re not looking at numbers, just the right mares and hopefully we can breed another Sunlight and do it again."

Speed is of the essence to Thompson as he mulls over which mares might suit the stallion best.

“What’s worked at home and what we try to do is speed on speed, and that really suits our market," he says. "Coming up here, we really see the speed as our advantage, that’s the niche we have, so we're trying to bring as much speed back to the table as we can.

“We know what we're going to get – a fast, strong two-year-old who will really train on at three and develop into a lovely older horse – that’s our place in the market and that’s what we want to focus on.”

Australian sires have become a familiar part of the stallion landscape in Britain and Ireland, with the likes of Fastnet Rock, Exceed And Excel and Choisir all enjoying tremendous success with their northern hemisphere crops.

Thompson is confident Widden has unearthed the next shuttle sensation in Zoustar.

“We’ve made a champion first-season sire in Australia and we’re going to turn him into a great down under, but our commitment up here and our mission now is to do it in the north," he says.

“We're committing to a long plan and we’re going to do everything we can to turn him into a big, important sire up here.

“From an Australian point of view, that’s a huge aspiration but it's something I think we can really achieve, and it's something we're going to work tirelessly with the guys at Tweenhills to do.”

The commitment to securing Zoustar’s place as a stallion of note in the northern hemisphere comes as no surprise, given that the now eight-year-old had been set for a European campaign before injury struck, prompting his retirement in 2014.

Now it is Zousain, one of the leading lights of his sire’s first crop and a future recruit to the Widden stallion ranks, who has been entrusted by Thompson with the job of settling what he describes as “unfinished business” in Europe.

“Hopefully we can bring him to Ascot and have some success up here – that’s his ultimate target and he’s that sort of horse,” he adds. "He's really progressive and for us he is so much like his old man, and hopefully he can turn up and do what we thought his sire could do. There’s so much more to look forward to.

“He’ll run first up in the Lightning and then the Newmarket. Taking on the older horses as a three-year-old isn't an easy thing to do, but he’s that sort of horse. He’s had a bit of an interrupted spring, he had a virus and a temperature on two occasions leading into the Golden Rose and the Coolmore.

“Northern Meteor was such a great sire, and in Zoustar we found his perfect son. Now Zousain is the next one to continue the line."

Reflecting on Zoustar's southern hemisphere book this year, Thompson adds: “Having to decline so many mares to Zoustar this season was frustrating. Applications were made for some lovely mares to come to him and the horse was way oversubscribed, so it would have been lovely to be standing a son of his alongside him.

“But i know how popular the horse is going to be next year and with the hundreds of bookings we already have, we’ll be able to offer the right son and the next option, something to really look forward to down under."

While Zousain still has the opportunity to enhance his stallion credentials on the track, his sire is now reliant on positive feedback from breeders, and with no shortage of that, partnered with an incredible start to his stallion career, Zoustar is set to see his fee increase markedly for the 2019 southern hemisphere breeding season.

“All the European breeders have a mate or a contact in Australia, and they’ve all rung up and said ‘tell me a bit more about this Zoustar’, and of course the Aussies are telling them to commit to him and send him some nice mares, telling them how good he is,” Thompson adds.

“European buyers and agents like Angus Gold, those guys who come to Australia every year and have seen the stock and understand them, they’re all keen to support him.

“He’s A$60,500 this year, but when we set his fee he was three quarters of the way through his two-year-old crop. Since then he has gone to another level. We under-set his fee significantly at home.”

FIRST PUBLISHED 6:00PM, DEC 2 2018
We under-set his fee significantly at home and we should have probably been double what it was, at around A$120,000