Why British and Irish breeders should get to know Northern Meteor 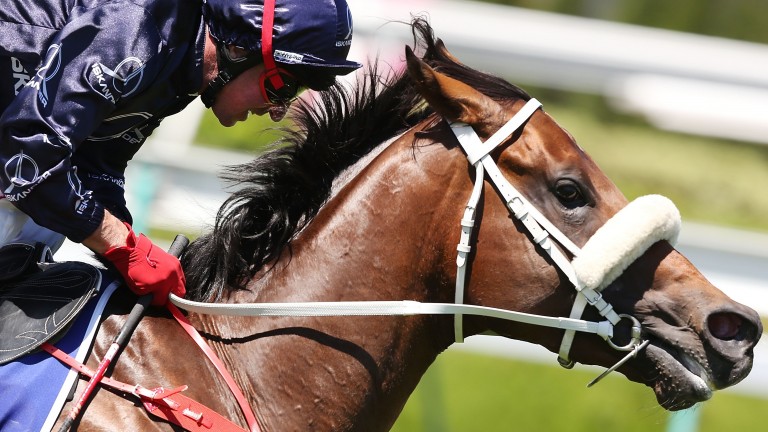 Now might be the time for British and Irish breeders to better acquaint themselves with the late sire Northern Meteor, as he has two freshman sons in Fighting Sun and Zoustar who have made a bright start with their debut runners in Australia and are in the ownership of operations with international outlooks.

Granted, it is still early days in the southern-hemisphere season, but there is nevertheless a live possibility either or both could be in line for a shuttle trip north of the equator at the end of the year if they can sustain their early success.

Northern Meteor's tale was one of triumph and tragedy. A winner of the prestigious Coolmore Stud Stakes for Gai Waterhouse in his racecourse pomp, he stood at Widden Stud in the Hunter Valley on behalf of owners Gooree Stud.

He supplied 19 winners in his first term with runners in 2012-13 but, in a case of excruciatingly poor timing, succumbed to colic 24 hours before officially being named Australia's champion freshman sire over studmate Sebring at the end of the season.

As a measure of the high regard in which he was held before his premature death, he was reportedly under serious consideration to be the first stallion to cover sprint queen Black Caviar before that prize fell to Exceed And Excel.

With the oldest of his four crops now aged seven, Northern Meteor's record as a stallion stands at 276 winners from 363 to have raced for a commendable strike-rate of 76 per cent, with 24 stakes winners and 16 place-getters to his name according to Arion statistics.

The calamity of the loss of Northern Meteor from the Australian stallion ranks is underscored by the fact that a quarter of those stakes winners struck at the highest level.

There were four from his debut crop – Amanpour (Queen of the Turf Stakes), Cosmic Endeavour (Canterbury Stakes and Tattersalls Tiara), Romantic Touch (JJ Atkins Stakes) and Zoustar (Golden Rose and Coolmore Stud Stakes) – and one each from his second and third crops – Shooting To Win (Caulfield Guineas) and the year-younger Speak Fondly (Flight Stakes).

A saving grace is that Northern Meteor has a clutch of exciting young sire sons in Australia, with the first three retired to stud – Eurozone, Fighting Sun and Zoustar – represented by their first juvenile runners this southern-hemisphere season.

Zoustar, whose appeal is compounded by being a high-class two-year-old out of a sprint winner by Redoute's Choice, has made the most striking start.

He has posted two winners from eight runners: one of them, Sunlight, is a A$300,000 (£170,000/€190,000) Magic Millions yearling who took the company's lucrative 2yo Classic sales race last month. The Tony McEvoy-trained filly, owned by a female syndicate that includes Tweenhills bloodstock manager Hannah Wall, is out of the Group 3-winning Charge Forward mare Solar Charged.

Zoustar's other winner also has a connection to the British Isles, as the Chris Waller-trained colt Zousain – who beat two Godolphin charges to land a Randwick maiden on debut this month – was bred by Richard Pegum out of his Grade 3-winning Elnadim mare Pasar Silbano.

Zoustar will, admittedly, have to keep up momentum to justify his covering fee, which in the past covering season stood at A$44,000  (£25,000/€28,000) at Woodside Park Stud. But he is certainly on the right track and hopes that he might travel to Europe one day – presumably to Tweenhills Stud, the headquarters of the Qatar Bloodstock stallion operation – are raised by the fact he came so close to doing so at the start of his stallion career.

Zoustar came to Britain for a crack at Royal Ascot in 2014 but an injury setback ruled him out of taking up his entries in the Diamond Jubilee and King's Stand Stakes.

He was subsequently paraded at the inaugural Goffs London Sale, and drew plenty of admirers in the process, but perhaps the combination of being unable to showcase his prowess at Ascot, and what was then the lower profile of Northern Meteor in Europe, meant the decision was taken not to reverse shuttle him from his initial home of Widden Stud in 2015.

However, Tweenhills' David Redvers said as the first crop of Zoustar went through the ring in Australia last year: “We’ll definitely consider bringing him back to England as a proven stallion, for which there’s great demand."

Fighting Sun, another son of Northern Meteor with first-crop runners in Australia this season, is out of Australasian Oaks heroine Irish Darling and was an unbeaten two-year-old who was a one-time favourite for the Golden Slipper after winning the Listed Canonbury Stakes.

He has recorded three winners from nine runners including Platinum Mam'selle, who has finished second in Group 3 company in New Zealand, and from a lower price point than Zoustar; his fee at Sun Stud this past southern-hemisphere covering season was just A$13,750 (£7,800/€8,700).

The Hong Kong-owned, Australian-based Sun Stud has horses in Europe, headed by Prix Jean-Luc Lagardere winner National Defense who is standing at the Irish National Stud before shuttling to the operation's base in Victoria later in the year. The stud's bloodstock adviser David O'Callaghan told the Racing Post recently they would be more than willing to send a stallion in the reverse direction should the opportunity arise.

The other two Northern Meteor sons at stud in Australia are the brothers Deep Field and Shooting To Win, whose oldest crops are yearlings; and it is the brief, stuttering European stallion career of Shooting To Win that illustrates why connections of Zoustar were probably correct to wait until he was a proven source of talent before deciding whether to reverse shuttle him, and serves to highlight how the powers of Northern Meteor have not yet been fully appreciated by British and Irish breeders.

Shooting To Win was undeniably a brilliant performer on the track, as he beat Scissor Kick by three lengths to take the Group 2 Stan Fox Stakes and had Rich Enuff and Wandjina in arrears when he scored in the Group 1 Caulfield Guineas. His pedigree should have been well-known on the global stage too, as he is descended from Sir Patrick Hogan's legendary blue hen Eight Carat, the dam of five top-level winners, among them the influential sire Octagonal.

However, when he joined Kildangan Stud in 2016 he appears to have been met with relative indifference from local breeders, covering only 40 mares at a fee of €7,000: a small number by the standards of most newcomers under the Darley banner and dwarfed by his initial book of 156 at home.

Understandably, from Darley's standpoint at least, Shooting To Win has not shuttled to Europe again. His sole northern hemisphere-bred crop has also struggled in the ring with seven foals offered at auction in Europe last year and six selling for an average of around £5,400 and median of £3,150 – significantly below the cost of production.

Several of those to have changed hands look bound for foreign shores and consequently it is going to be mighty hard for Shooting To Win to gain any sort of foothold in Europe. That is through no fault of his own, of course, nor of the breeders who did support him and have yearlings to sell this autumn. One can only hope Northern Meteor has gained wider recognition by then, and that his descendants become more attractive to buyers as a consequence.

Australian breeders would be entitled to feel insulted by the apathy of their European counterparts towards Shooting To Win. A Caulfield Guineas winner is not to be sniffed at – as the likes of Redoute's Choice, Lonhro and Starspangledbanner have demonstrated – and his family is held in such high esteem down under that his dam, the Elusive Quality mare Listen Here, sold for an all-time Magic Millions record price of A$3.4 million (£1.9m/€2.2m) when bought by Cressfield Farm and China Horse Club in 2016.

When it comes to variations between stallion reputations, Australia sometimes seems not so much on the other side of the world from Europe, as in another galaxy.

Perhaps Shooting To Win was just ahead of his time in Europe. If Fighting Sun and Zoustar build on the strong foundations they have laid down, and if Deep Field converts his sales success on to the track, then he might just prove to be a forerunner for other stallion sons of Northern Meteor travelling to Britain and Ireland.

That's not to mention that Norther Meteor has plenty to pique a pedigree enthusiast's interest, as he has no Danzig blood but a beguiling bit of inbreeding to the remarkable Rough Shod.

FIRST PUBLISHED 6:00PM, FEB 17 2018
Australian breeders would be entitled to feel insulted by the apathy shown by their European counterparts towards Shooting To Win