In his latest issue, Martin speaks to leading bloodstock agent Alex Elliott and looks at the key sales events coming up this week

There might have been a raging bull market at the recent Keeneland September Yearling Sale, but one up-and-coming outfit well known in Britain and Ireland still got stuck in at the behemoth auction for the first time.

Amo Racing, on the mark with Friday’s impressive Rockfel Stakes winner Hello You, signed for eight lots who cost a total of $1.54 million. The haul comprised a pair of colts by Nyquist, a colt and a filly by Arrogate, fillies by Accelerate, Into Mischief and Quality Road, and a colt by Wootton Bassett.

Football agent Kia Joorabchian, the driving force behind Amo Racing, was scouring the grounds at Keeneland himself, ably assisted by the team of bloodstock agent Alex Elliott and master pre-trainer Robson Aguiar.

Elliott told Good Morning Bloodstock that many of the lots bought in Kentucky over the past fortnight will stay in the US, as Joorabchian is keen to expand his racing interests stateside.

“Kia’s spending more and more time in America, and is very interested in the racing scene there,” he said. “He likes the idea of the better prize-money in the US and is keen to have a stable there.

“Amo Racing bought three horses at the American breeze-up sales this year. Two of them have run and one of those – the Palace filly Olivia Darling, who was bought at Fasig-Tipton’s Midlantic sale in Timonium in May [cost $360,000] – won on her second start for Graham Motion at Delaware Park this month and looks like she could be quite good.”

Elliott felt that the Amo Racing team had managed to find value at Keeneland, despite fevered demand that drove prices skyward.

“The Wootton Bassett colt cost $200,000 and will come to Europe," he said. "He's a big horse out of a mare called Eldacar, who was a smart stayer in France. Although he was very nice, he’s going to need a bit more time and looks more of a three-year-old. 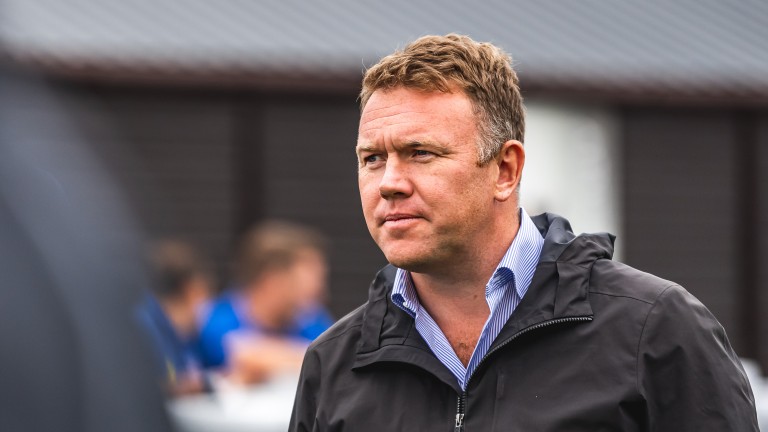 “He maybe wasn’t precocious enough to appeal to Coolmore as a stallion prospect, and he doesn’t look the type who’d have the early speed for US turf racing, like the Kingmans and Dubawis they export over there, so I think he fell through the cracks and we managed to get him for good money. If he’d been at a sale in Europe he might have cost 200,000gns, not $200,000, and even a bit more.”

Another of Amo Racing’s purchases who looks good value, on paper at least, is the Quality Road filly out of multiple Grade 1 winner Winter Memories, making her a half-sister to high-class performers Seasons and Winter Sunset. She was netted for just $150,000 – her sire’s covering fee in 2019.

“Jane Buchanan helped us find her and she’s been earmarked for Graham Motion, although I wouldn’t rule out her coming to Europe as she could work well here,” said Elliott. “She wasn’t the biggest, and the Americans like a bigger horse, so we were able to buy her for a very good price.”

With so much competition among buyers at Keeneland September, the Amo Racing team were forced to look for angles like those in order to buy.

“It was hard-going for a single entity like Amo Racing coming up against all those buying partnerships that exist in America now,” said Elliott. “When there’s a colt that ticks all the boxes, you have all the partnerships on them – Brad Cox’s new group, SF Bloodstock, Repole and St Elias, Coolmore and so on and so on.

“It’s very hard to compete against those guys, when they’re incentivised by good prize-money and finding top-end stallion and broodmare prospects. That became evident when horses we liked were making double our valuations. It was tricky, but I think we bought well.”

Elliott suggested it would be unwise to infer that Amo Racing’s expansion into America would affect its operations in Europe, where it has enjoyed significant early success not just with Hello You but also the likes of Go Bears Go, Meu Amor, Mojo Star, Prince Alex and Sardinia Sunset.

“With Hello You winning so nicely on Friday, and Go Bears Go running so well in the Middle Park, you’d have to think there’d be no reason to slow down here, but it’s always dangerous to presume,” he said. “America is just something that Kia has taken a shine to in the past year, and he sees it as a good time to have a stable there.”

Elliott arrived in Ireland on Saturday ahead of this week's Goffs Orby Yearling Sale, where his pursuit of talented athletes, not just for Amo Racing but other clients, continues.

“I’ll be looking for the Lucra Partnership, who have done really well with New Mandate, who won the Royal Lodge Stakes, and Zinc White, who won a couple of races before selling at the Goffs London Sale for £310,000,” said Elliott.

“There’s also the Audax Partnership, who have a nice horse by Territories called Unspoken who’s won twice, and an unraced horse by Postponed called Postmark who we think a lot of. I’ll have ten colts to buy for those partnerships this season.”

Asked whether he’ll have to adjust his eye before inspections, coming from Keeneland straight to Goffs, he replied: “There are certain things that are different; in America you’re seeing mainly big dirt horses who don’t have that European walk, but first and foremost I’m always looking for quality and that’s the same the world over."

Goffs Orby and Sportsman’s Yearling Sales
What: the most prestigious yearling auction of the year to be held in Ireland, the Orby, is followed by the slightly less boutique, but still very bountiful, Sportsman’s Sale
When: Orby, today and tomorrow, with selling getting under way at 10am; Sportsman’s, Thursday and Friday with 10am starts once again
Where: Kildare Paddocks in Kill, Co. Kildare, for the first time since 2019 after last year’s sale was moved to Doncaster due to Covid-19
What you need to know: Goffs have come out swinging after a muted renewal of the Orby in 2020. This year’s catalogue is jam-packed with well-bred lots, including full or half-siblings to Group 1 winners Alpha Centauri, Channel, Exultant, Halfway To Heaven, Laws Of Indices, Lucky Vega, Mother Earth, Perfect Power, Persuasive, Poetic Flare and Winter Power, plus yearlings out of champion fillies and Goffs mainstays Alexander Goldrun and Finsceal Beo. All lots will be eligible to run in the rebooted Goffs Million sales race next year.

What: an exclusive offering of promising and proven horses in training held on the eve of the Prix de l’Arc de Triomphe
When: Saturday evening at 6.30pm local time, 5.30pm BST
Where: Saint-Cloud, in the western suburbs of Paris
What you need to know: with the world’s leading owners usually in town for the big race at Longchamp, there are often enormous prices paid for the most alluring lots on offer. Glorious Sight, Toulifaut, Spain Burg, Prince Gibraltar and Wekeela have all sold for seven-figure sums in the past decade, while this season’s Poule d’Essai des Pouliches heroine Coeursamba was bought for €400,000 at the 2020 renewal.

“People are emerging from the pandemic with a renewed sense of vitality, and they're ready to have fun,” said Keeneland president and CEO Shannon Arvin as a remarkably buoyant renewal of the September Yearling Sale ended on Friday.

With the Cheveley Park Stakes and Middle Park Stakes both falling to progeny of first-season sires, in Caravaggio’s daughter Tenebrism and Ardad’s son Perfect Power, the freshman table has really come to life.

Keep tabs on the first-season sires in Racing Post’s stats for Britain and Ireland, which can be ordered by number of winners, winners-to-runners ratio, volume of stakes winners and progeny earnings.

In this week's edition, we look at the implications of the HKJC's return to the US yearling market, after purchasing a Medaglia D'Oro colt at Keeneland.

FIRST PUBLISHED 10:12AM, SEP 28 2021
Kia’s spending more and more time in America, and is very interested in the racing scene there