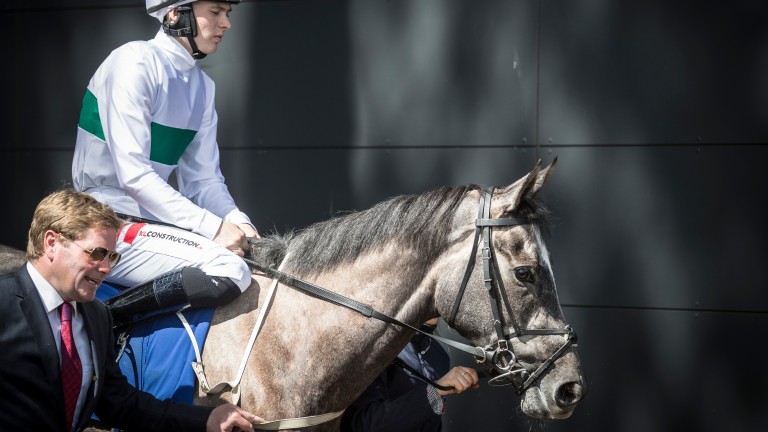 Who's Steph: the daughter of Zoffany has won two Classic trials
Patrick McCann
1 of 1
By Martin Stevens UPDATED 6:41PM, MAY 19 2018

Patrick Headon has enjoyed a long and successful career in the bloodstock industry but he might just have bred his best runner in those more than 40 years, judging by the convincing victories of Who's Steph in two Classic trials this season.

Who's Steph stands as testament to the experience and knowledge that Headon has accumulated over five decades in the business, as she is out of a mare acquired for the breeder's Wraymount Stud in County Offaly at a cost of just €5,000.

The dam, Llew Law, is a Verglas half-sister to Windsor Castle Stakes winner Hototo bought for that negligible sum at the Goffs November Mares Sale in 2012. Who's Steph is her second foal after the smart middle-distance winner Thunder Crash, who was also saddled by Lyons for Jones.

Describing the journey that took him to breeding Who's Steph, Headon says: “I've been at Wraymount for 30 years now with my wife. I've got five kids who have left the farm for other careers.

“I've been in the bloodstock business all my working life – since 1976. I went to Trinity College Dublin and then I went working on the first stallion shuttle to Australia, taking Ridan [by Nantallah out of Rough Shod] who had been at stud in America down there. Hot Spark was on the same flight.

“I came back in '77 to run Ballygoran Stud in Kildare and we stood some good stallions – the likes of Royal And Regal, Nebbiolo, Montelimar and Rarity. In fact, Sir Ivor stood there for a couple of seasons before we owned it.

“We sold the stud to Hamdan Al Maktoum in 1988 and then moved down here. We keep around ten mares of our own as well as paying guests.”

Recalling why he overlooked Llew Law's uninspiring race record – she failed to win in 15 starts but was placed over middle distances for a peak Racing Post Rating of 50 – to take a chance on her, he says: “She was a good-looking mare and I quite liked Verglas and the back pedigree, especially Hototo who had a lot of speed in him and kept going after being sent to the middle east.

“Llew Law has been very lucky. Her Footstepsinthesand colt Thunder Crash, who won a couple of races, was sold out of Ger Lyons's yard at Goffs for €66,000 last autumn.

Headon received a fair enough return for Who's Steph, as her sire Zoffany commanded a fee of €7,500 in the year she was conceived, but he feels market conditions might have limited her value.

“I liked her as a foal and there was an awful lot of interest in her at the foal sales – she just stood out. But if she had been a colt she'd have made a lot more,” he says.

“At that time the pedigree was a bit light around her and, although she made a reasonable price, I thought she might make a little more with the interest as she was looked at around 100 times. All the pinhookers liked her but they were hemming and hawwing, as in the market at the time it was easier to resell a colt. A filly would need a very good pedigree at that level.”

Headon is generous in his praise of the buyer who did take the chance on her and managed to double their investment.

“I'd like to pay tribute to the people who bought her off me, Whitehall Stud, as they presented her very well at Fairyhouse. They should get credit for looking after her so well. People who pinhook often don't get the attention they deserve.”

Next for Llew Law is a Rock Of Gibraltar two-year-old colt who was recently broken at home, before being sent to a trainer to carry Headon's silks. The mare is back in foal to Zoffany.

The burning question is whether Headon will cash in on his €5,000 mare now that she is the dam of two winners from two runners, one of them a live Classic contender. She is descended from Daniel Wildenstein's champion two-year-old filly of 1973, Hippodamia, to boot.

“People are interested in her,” he says. “I'm usually a seller. I find that every horse has a price. She's still mine at the moment, but I am commercially minded.”

Financial considerations aside, Headon has learned in his 40-plus years in bloodstock that when a horse like Who's Steph comes around you have to enjoy it and he adds: “I've a long tradition of looking after horses for other people – our clients have been successful – and I've had a fair bit of luck down the line, but to breed a horse like this is an honour and a privilege.

“This is what we try to achieve every day of our lives and suddenly it happens, so you have to take a minute to take stock and reflect on it.”

One For Arthur's dam in foal to leading French jumps sire

Progressive Masen a 'proper horse in the making' after Knockaire success 'He's got a huge future' - could Glounthaune follow in Poetic Flare's footsteps?