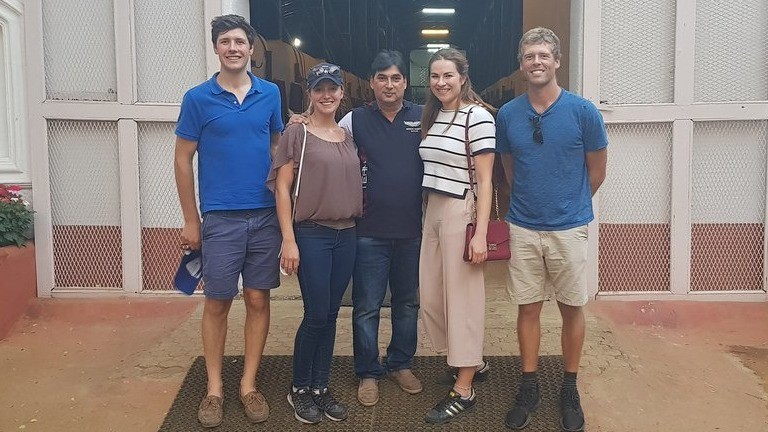 The horse racing industry is made up of a jigsaw of participants, regulators and spectators. It is fast-paced and constantly changing at the mercy of socio-economic and political trends but also due to the drive and passion of those involved.

Thanks to Godolphin Flying Start, trainees are exposed to many of racing’s latest innovations in the major international jurisdictions and allowed to experience their effects first hand.

When given the opportunity to write for the Racing Post, I thought it best to highlight the concepts that have struck me most during the programme and have potential to be mirrored successfully to some extent in Britain.

It has been well documented that the racing industry in Australia is in rude health. Racing is a mainstream sport there and one that Australians are incredibly proud of, now more so than ever following the emergence of the great mare Winx.

What is notable however, is how regulators have created events which allow spectators to interact with the sport to such an extent where they now contribute.

The Everest is an event modelled on the Pegasus World Cup in America, whereby slots to run in the race are purchased and traded at significant cost and those involved compete for a share of the pot.

The race has developed into a highlight of the Australian racing calendar and has attracted a young and exciting fan base.

The Kosciuszko is a race on the Everest undercard that has created noticeable hype from more modest beginnings. The race is restricted to country trained horses in New South Wales (horses trained at in the ‘country’ sector, away from the city and metropolitan tracks).

Members of the public can purchase tickets for $5 and put themselves in with a chance of holding one of the 12 slots open for the $1.3 million in prize money.

Winning ticket holders can choose the horse they want to represent their spot as well as being able to broker their own deal with the owners of the horse as to how the prize-money should be split between them if the horse wins or is placed. Anyone can purchase any number of tickets and the infectious FOMO created by the dream of holding a winning ticket has made the concept into a huge success with 200,000 tickets sold in this year's inaugural race.

Racing Victoria has also introduced the All Star Mile which was run for the first time on Saturday, where connections of horses pay an entry fee of $500 and the public votes on which horse they would like to see race. The top ten vote-getters are given the chance to race for the prize fund with four wildcards being released at a later date to mix things up a bit.

This engagement with the public is one of the reasons the racing industry is so healthy in Australia and is helping to widen its already broad audience. Perhaps in National Hunt racing, where horses generally have longer careers than their Flat counterparts and develop a loyal and enthusiastic fan base, there is potential for similar events.

Although increasing racing’s audience is important, converting interested onlookers into someone who has a bet is vital.

Admittedly, there are moral implications around this, but horse racing is in simple terms a betting product and something that cannot survive without an income. In recent years, British racing’s revenue has migrated towards the racecourses themselves who receive income from admissions, sponsorship and of course lucrative media rights deals.

With the recent restriction on bets made using FOBTs and the shift towards online gambling likely to reduce this significantly due to the closure of betting shops across the country, there is a need to increase Levy Board contributions.

By creating ways to enhance and refresh the betting experience racing can regain a greater share of the betting market following the increased popularity of other gambling channels.

Fantasy sports have become increasingly popular, especially among the millennial generation in America. A fantasy sport is a game where individuals put together their own combination of players selected from an entire sports league, for example, the NFL.

Points are then awarded relative to the actions of individuals within your team such as touchdowns, tackles and completed passes among others. Players within the fantasy game deposit money to compete within a league and those with the most points over a certain time period take a share of the winning pot with the hosting organisation holding a takeout on all deposits.

In order to stop people picking all the best players, they are given a theoretical budget where players are valued in line with their ability. Although fantasy sports leagues have been run over the course of a season, there is proving to be more demand for Daily Fantasy Leagues which last for a single day and have a quicker turnaround.

In Britain fantasy sports are already popular with games available for Premier League football. Currently however, there is no horse racing fantasy game bar the occasional five to follow competition. With so many variables and different participants in racing there is surely an opening for a similar game including not only horses, but trainers, jockeys and owners.

Dirt racing is another aspect of the American scene which is intriguing. With the growing shift towards American bloodlines in Europe as well as increased internationalisation of racing pushed through prize-money incentives and ease of travel, more horses are attempting to run on dirt.

This is driven further by the desire of industry giants Godolphin and Coolmore to win the Kentucky Derby and other major dirt races to increase the versatility of stallion prospects and achieve black type.

Giving trainers and owners the opportunity to gauge how a horse handles the dirt surface before travelling abroad would be a useful tool for them. It would also be a unique and interesting outlet for punters who are constantly looking for new angles to find value.

There have been suggestions in the past regarding the creation of a dirt racetrack in Britain and now more than ever there are arguments to suggest it would be a success.

Dubai is a fascinating place and its racing holds an interesting mix of European and American themes with participation from all over the world competing for the outstanding prize money on offer.

For the local Emiratis however, camel racing is equally as popular. This strange sport is big business in Dubai with AED95 million (about £19 million) in prize-money over the six-month racing festival there.

Camels race for distances of up to ten kilometres, dependent on age, and are ridden by robotic jockeys, controlled by their trainers and owners who follow the race in a battalion of 4x4s.

It's difficult to compare this sport with horse racing, however something which I thought was interesting was its commentary, which is given from upsides the camels in a separate car. Perhaps there is scope for this in racing coverage in England.

While racing commentary is already very good, seeing and hearing a snapshot of how the race is going from close up, by an expert in a following car would not only give a different commentary angle but another perspective for TV viewers.

Having now travelled the world observing and learning from the different racing cultures, it's clear that as both a betting product and an experience it more than holds its own and still has enormous potential. Any activity which involves gambling and animals will be open to scrutiny, however this also creates an endearing relationship between man and horse which makes it unique.

Horses and racing are both things I love and are what I am committed to basing my life around, something which fills me with great excitement.

Regardless of the challenges racing faces, the future looks bright!

For more information on the initiative, visit the Godolphin Flying Start website

FIRST PUBLISHED 6:06PM, MAR 20 2019
Now more than ever there are arguments to suggest a dirt track in Britain would be a success