What About Carlo provides Creachadoir with another first

Four years after getting sire off the mark, he adds a maiden stakes success 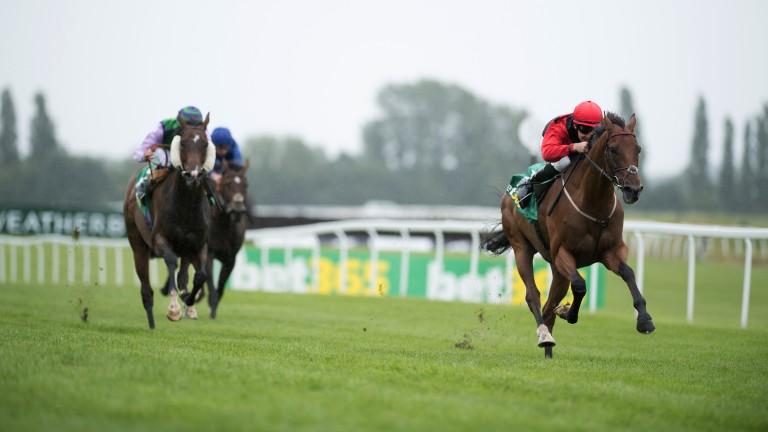 What About Carlo: the only foal out of the Artan mare Boccatenera
Edward Whitaker / racingpost.com/photos
1 of 1
By Zoe Vicarage 6:56PM, JUL 22 2017

In a career that has spanned 37 races, What About Carlo had never been successful at stakes level until his comfortable victory in the Listed Steventon Stakes at Newbury on Saturday. And, in recording a seventh win, he also became the first black-type scorer on the Flat for his sire Creachadoir.

Creachadoir, best remembered carrying the Godolphin blue to victory in the Lockinge Stakes as a four-year-old, is among seven winners from seven runners to date for his dam, the Sadler's Wells mare Sadima. These also include a second scorer at the highest level in Preis von Europa and Grand Prix de Saint-Cloud hero Youmzain, a son of Sinndar.

Sadima's ten foals have been bred by Frank Dunne, the reclusive owner, breeder and trainer whose name has been linked with the recent €8.15 million sale of the historic Ballymacoll Stud. One certain connection to that famed nursery is the third dam of Creachadoir, the Troy mare Cocotte - whose most illustrious offspring is Ballymacoll's globetrotting Group/Grade 1 hero Pilsudski.

Creachadoir was bought by his first handler Jim Bolger for €83,000 at the Tattersalls Ireland September Yearling Sale in 2005. His stud career began at Haras du Logis in Normandy, where he spent five seasons before transferring to Haras De Lonray.

What About Carlo was already his leading performer to date with an RPR of 107. The six-year-old gelding has been a flagbearer from the outset, having also been the first of his sire's debut crop of two-year-olds to win at Goodwood in 2013.

Bred by Haras du Logis and Julian Ince, What About Carlo is out of the winning Artan mare Boccatenera, a sister to German champion two-year-old Boccassini - winner of the Prix Robert Papin - and a half-sister to Listed-placed Boccalino.

What About Carlo was bought by Houghton for 23,000gns at Book 2 of the Tattersalls October Yearling Sale in 2012.

Creachadoir has meanwhile been well represented in the National Hunt sphere, notably by Footpad, a Grade 1-winning hurdler for Willie Mullins.