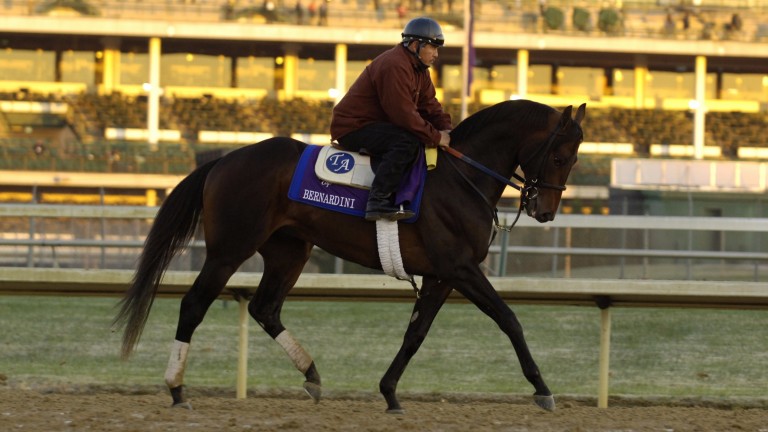 Godolphin America's top-level winning racehorse and sire Bernardini has died at the age of 18 at Jonabell Farm due to complications from laminitis.

The homebred son of A.P. Indy won six of his eight starts for Thomas Albertrani, including the Preakness and Travers Stakes in a thrilling 2006 season, which subsequently saw him crowned the highest rated three-year-old in the world and Eclipse champion.

Unraced at two, Bernardini broke his maiden on his second start when winning at Gulfstream Park by eight lengths and then notched up five Graded-race successes in a row culminating in the Jockey Club Gold Cup. His final start came when second in the Breeders' Cup Classic.

Among his other leading performers are Godolphin's homebred Travers and Woodward winner Alpha, Shadwell homebred Vosburgh and Stonestreet’s Cavorting and Rachel’s Valentina.

We are heartbroken to report that #Bernardini has been euthanized this morning at Jonabell Farm due to complications from laminitis.

We will miss him greatly

The fifth foal out of Grade 1 Starlet Stakes scorer Cara Rafaela, he had also made his mark as a broodmare sire when becoming the youngest stallion to reach 50 black type winners as a damsire.

Michael Banahan, director of farm operations for Godolphin America, said: "Bernardini was one of a kind. From the day he was born, he exuded class. He was that crop’s best foal, best yearling and best racehorse. His brilliance was only surpassed by his wonderful character.

"He will be sorely missed by all on the farm but especially by his handler for the past 15 years, Philip Hampton. It was an honour to be a custodian of this Classic-winning stallion whose legacy will live long as a broodmare sire."

Albertrani added: "He was such a majestic animal. He was very talented, one of the best horses I’ve ever been around. I just feel very fortunate to have the opportunity to train him. He was a star."

Jimmy Bell, president of Godolphin USA, said: "Bernardini was Sheikh Mohammed’s first winner of a Triple Crown race – and a homebred one, too – and then a leading sire. We've been blessed to have him.

"A beautiful horse, and a lovely character, we are lucky to have so many of his daughters on the farm to continue his legacy."

FIRST PUBLISHED 4:28PM, JUL 30 2021
He will be sorely missed by all on the farm but especially by his handler for the past 15 years, Philip Hampton