Siblings to Lethal Power, Hit It A Bomb and Bago all set to debut 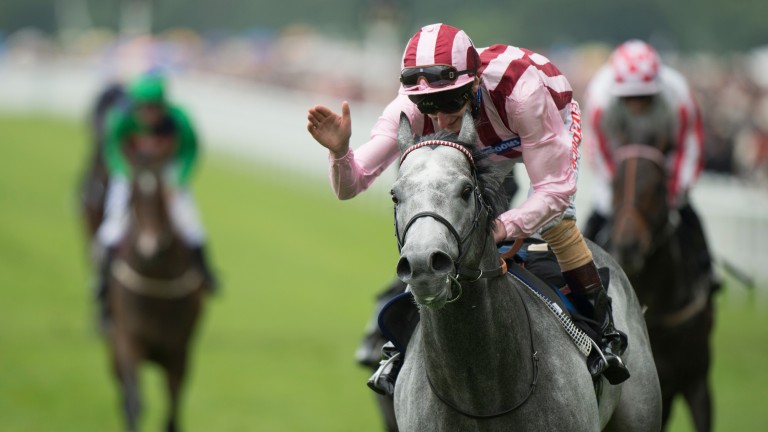 Lethal Force: his three-parts brother is one of the horses to run at the Curragh on Sunday
Edward Whitaker
1 of 1
By Zoe Vicarage UPDATED 10:22AM, AUG 20 2017

The Curragh is the place to be on Sunday for bloodstock aficionados as the opening race on the card features several relations to top-class performers, who are to make their debuts for their connections.

Of the 16 two-year-olds who will contest the 7f maiden, three boast the distinction of having top-level winners as siblings. The first of those is Lethal Power, an Acclamation three-parts brother to dual Group 1 winner and now first-season sire Lethal Force, who was bred by Flor Ryan out of the unplaced Desert Style mare Land Army.

She in turn is out of the winning Explodent mare Family At War and is a half-sister to Flanders, the dam of Haydock Sprint Cup hero G Force and Grade 3 scorer Louvain. Louvain has herself since produced the dual Grade/Group 1-winning Mizzen Mast mare Flotilla.

Legendary trainer Aidan O'Brien will unleash Threeandfourpence, a brother to Cheveley Park Stakes scorer Brave Anna and Breeders' Cup Juvenile Turf hero Hit It A Bomb. Like his elder siblings, he is by War Front and was bred by Evie Stockwell out of the Group 3-winning Sadler's Wells mare Liscanna.

The cross of War Front over Sadler's Wells mares - which has already produced the aforementioned top level scorers Brave Anna and Hit It A Bomb - is also responsible for Listed scorer The Brothers War.

Completing the trio is the Niarchos homebred Zabriskie, a son of Frankel out of the unraced Nureyev mare Moonlight's Box. He is a half-brother to none other than the operation's five-time Group 1 winner Bago.

His top-class relations don't stop there as he is also a half-brother to Prix du Moulin and Prix d'Ispahan winner Maxios, whose first two-year-olds have hit the track this year, and to the Listed-winning Selkirk mare Beta.

Zabriskie's second dam is the dual Group 1-winning Mr Prospector mare Coup De Genie, herself a daughter of the Niarchos family's influential blue hen Coup De Folie, which makes Coup De Genie a sister to Machiavellian and a half-sister to Exit To Nowhere and to Hydro Calido.

The family has been active throughout this season as Denebola, by Storm Cat out of Coup De Genie, has produced the Listed-placed Excelebration colt Ratiocination while Denebola's daughter Beta Leo is the dam of this year's Prix de Diane heroine Senga.

Frankel is duly represented in this contest thanks to his son Spanish Point, who was a 1.3 million Guineas purchase by MV Magnier, Mayfair Speculators and Peter and Ross Doyle at Book 1 of the Tattersalls October Yearling Sale.

Bred by Cheveley Park Stud out of their 2006 Lockinge Stakes winner Peeress, Spanish Point is a half-brother to three winners including the Listed scorer Ladyship.

With bluebloods aplenty, by the time 1.40pm comes round on Sunday afternoon, this is a race on paper that can't be missed.

FIRST PUBLISHED 6:48PM, AUG 19 2017
Frankel is duly represented in this contest thanks to his son Spanish Point, who was a 1.3 million guineas yearling purchase