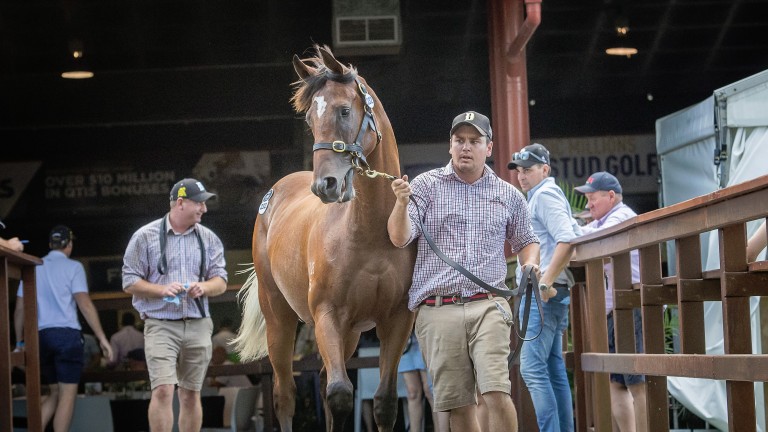 After all the glitz and glamour of the build up, which included a star-studded polo match and a barrier trial on the beach, Magic Millions kicked off the Gold Coast Yearling Sale on Wednesday with a session that more than lived up to the pre-sale hype.

"It's a bit stronger than last year," said Magic Millions managing director Vin Cox. "The average and clearance rate tells you that. We've extended the Book 1 catalogue so to increase those two figures is a herculean performance."

Arrowfield Stud's John Messara placed his faith in Dundeel when he sent the freshman sire to the Golden Slipper winner Miss Finland, and the stallion repaid him in spades on Wednesday as one of his first-crop sons stole the show during the first session.

The bidding opened at A$300,000 but after a flurry of cries from the bid spotters it became quickly apparent that the previous high mark was going to be surpassed. The bids kept coming until Boomer Bloodstock went to A$900,000 (£547,153/€629,292) to see off all comers and take home the strapping colt.

"I had the clients around me that just said to buy so we went after him strong," said Boomer's Craig Rounsefell. "I'd say we won't push the horse too early, he may make a late two-year-old but obviously as a three-year-old will be when he's at his peak. I'm very excited to secure him. He was an absolute standout and we couldn't find a fault with him physically. We love the stallion and Bjorn Baker is probably first in line to train the horse."

On the decision by Sean Tomlinson and Tony Tighe to go to such expense to buy the colt Rounsefell gave a tongue-in-cheek assessment of the situation, saying: "You just keep feeding them alcohol and amazing things happen!"

One of the standout lots on pedigree, the colt is out of the five-time Group 1 winner Miss Finland, daughter of Arrowfield's long-time flagbearer Redoute's Choice who has already produced the Group 1 winner Stay With Me as well as the Listed-placed Woodbine.

The transaction cemented Arrowfield's position at the head of the leading vendors' list by aggregate, with 14 lots sold for a total of A$3,395,000, nine per cent of the session's turnover.

There may have been a distinctly Australian feel to proceedings but that did not stop the progeny of a US-based sire grabbing a slice of the limelight, with Mandalong Stud and trainer Gary Nickson going to A$700,000 to secure the second-top lot, a daughter of three-time champion sire Tapit.

"We came just to buy this filly," said Nickson, who trains at Warwick Farm, Sydney. "We got here this morning and we're flying back this afternoon. We thought she'd go for between A$500,000 and A$700,000 because we know how much the service fee is over there, but had she gone for more we'd still have bought her.

"Rick [Pisaturo, owner of Mandalong Stud] picked the filly out. He knew the sire from America from his trips over there.

"It's a two-year-old pedigree, she's a nice filly and we had her out three or four times and she came in and out of her stall and she never seem ruffled, she has a beautiful nature.

"Mandalong Stud support me 110 per cent. Rick and I grew up around horses and he was very big in the cattle industry, although he's scaled down now, but he loves is racing," Nickson added.

The striking dark grey filly, one of only two representatives of Tapit in the catalogue, was offered by John Kelly's Newhaven Park. She is the first foal out of the Listed-winning Ready's Image mare Leinan, who was purchased by SF Bloodstock for $165,000 from Fasig-Tipton's July Sale.

"The dam was purchased by a client of ours, Ricky Surace, in America, she was in foal when he bought her after she'd been covered to southern hemisphere time," explained Kelly.

"She was foaled over here, she was an early foal so we always thought she'd suit this sale. The mare has a very good Snitzel foal and is now in foal to Delago Deluxe. We were expecting her to sell well but no one expects to get A$700,000 for a yearling."

Vinery at the ready

Among the early flurry of significant prices was the More Than Ready filly out of Heart Ashley offered by Kia-Ora Stud, who went the way of Vinery Stud's Peter Orton for A$600,000.

"She's the best filly in the sale," said Orton, who was bidding from the middle of the packed dining area that faces the rostrum. "We've been around all the fillies and think there's some strong ones out there. She's got a pedigree and we thought she was by far the best. We try and buy half a dozen fillies every year with the view that they'll become broodmares further down the track. We always want a bit of upside."

Vinery Stud is the southern hemisphere base of More Than Ready, a stud he has shuttled to for a remarkable 16 years from his US home at WinStar Farm in Kentucky, and Orton paid tribute to the stalwart of the stallion ranks.

"He's the most underrated stallion in the country, he does such a great job. Having broodmares that are by him is going to be a great outcross in the future. Especially after this filly has won the Golden Slipper," he added with a wry smile. "She'll be raced by the Vinery partners, Ananda Krishnan and a few others. We've been doing this for three years now and have a beautiful little group of fillies coming through."

The A$600,000 mark was also reached by a son of Sebring out of the Redoute's Choice mare Footprint from Musk Creek Farm, with the Hong Kong-based Little Kwok Hing Hung and agent Justin Bahen combining to secure the chestnut colt that shares his page with Group 1 winner Crawl.

The activity of big-named partnerships was one of the themes on Wednesday, and another syndicate to make a noteworthy acquisition was the Stonestreet, Peter Leidel, Aquis and Blue Sky Bloodstock faction that signed at A$500,000 for an I Am Invincible filly out of the Tale Of The Cat mare Furline.

"This was for Barbara [Banke - Stonestreet Stables] and one of our good friends for whom this is his first purchase in Australia, Peter Leidel who owns Lady Aurelia with us who was the champion European filly this year. And Justin Fung from Aquis Farm along with Julian Blaxland are also involved," said bloodstock agent John Moynihan.

"Justin and Julian own a horse with us in the US and we talked to Peter before about potentially partnering with us with something down here. He was excited about that and the partnership just came together. We're very happy with the price. We loved the horse, we thought she was one of the best early prospects here.

"It gives us a good chance to run in the race [Magic Millions 2YO Classic] next year and we'll keep our fingers crossed that we will get that done."

Stonestreet have previously partnered with Aquis to buy in the US, with the pairing signing for a colt by Kitten's Joy out of the Grade 2-placed Lady Lumberjack at $450,000 from Keeneland's September Yearling Sale.