More Than Ready colt was offered by Corumbene Stud 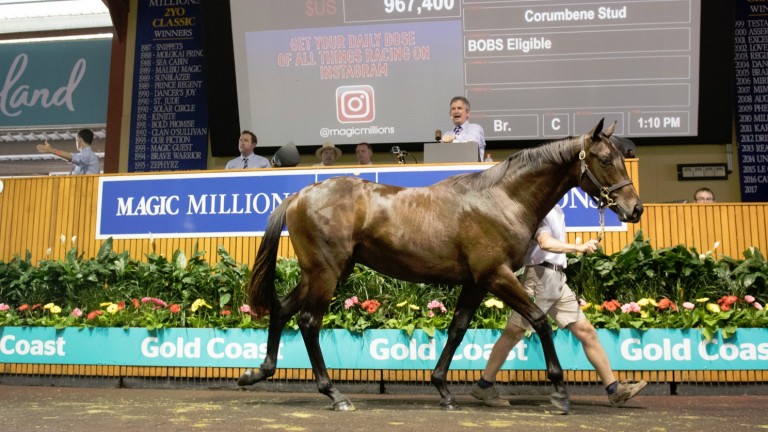 The More Than Ready colt brother to Sebring in the Magic Millions ring
Micheal McInally Photography
1 of 1
5:43PM, JAN 12 2017

Day two of the Magic Millions Gold Coast Yearling Sale on Thursday picked up where the previous session had left off, with an international collection of buyers throwing their weight behind a choice offering of Australian bloodstock to maintain the auction's ascendancy.

The day was headlined by three seven-figure lots, but strong trade throughout the session saw all key indicators showing improved year-on-year returns. By the end of day two turnover for the sale stood at A$78,792,000 - a 20 per cent jump from the equivalent day last year, the average at A$205,723 - an eight per cent increase, with the median of A$160,000 up six per cent from A$150,000. Most impressive of all though was the clearance rate that stood at 88 per cent.

"Today was really strong," said Magic Millions managing director Vin Cox. "Yesterday was good but today was even better. The depth of the market was outstanding, to get three seven-figure lots was terrific, but even the sub-hundred thousand horses were selling well and there was plenty of competition."

The seven-figure barrier was first broken by Gai Waterhouse, who went to A$1.3 million for a colt with one of the most eye-catching pages in the catalogue, being by More Than Ready out of the Flying Spur mare Purespeed, a bid that drew a round of applause from the packed bidding area.

The colt, offered by Corumbene Stud, is a brother to champion two-year-old and now Group 1 winner-producing sire Sebring and a half-brother to the Group 2 winner Pureness.

"It was very thrilling," said a typically animated Waterhouse. "Aquis Stud are in him, John Singleton's in him, the agent Dermot Farrington and his owners have come into him. Some of my owners that were in Vancouver have come into him, and Mr Altomonte who bred him.

"He was bred in the most exciting farm I know, which is Corumbene. I've had two Golden Slipper winners off that farm. I saw him in the paddock and said ‘George [Altomonte], I'm not leaving the sale without him! He's your next Golden Slipper horse'.

"He's a magical horse. He's very masculine, he moves so freely. He's got an oomph factor, a sex appeal about him. They've got to sort of affect me like that. I should know, I've bought Sebring, Vancouver and Pierro from this sale, this is a magical sale."

Despite being the most expensive lot of the day Waterhouse was adamant that she had secured herself a bargain.

"He was cheap," she said. "Look at his pedigree. Everyone's looking for pedigree pages and he's got exactly that. Sebring is one of the most exciting young stallions in Australia, why wouldn't this horse be worth A$1.3 million? If he went to Easter he'd be a A$3 million horse.

"I think he was half-price. I think he's a bargain. I know people will say I'm being facetious but I really do. My business is buying and selling horses and I think he was very well bought."

Given Waterhouse's track record of winning the Golden Slipper with horses bred by Corumbene it comes as no surprise she was determined to take home the August-born colt.

The first of her Corumbene graduates to win the Slipper was this colt's brother, Sebring, who took the 2008 renewal, while Overreach, a daughter of Exceed And Excel, claimed the 2013 running.

Corumbene's stud manager Toby Frazer, standing outside the Magic Millions barn named after her Golden Slipper-winning son Sebring, paid tribute to Purespeed, saying: "The mare's done a great job for us, she really has. To produce a Golden Slipper winner is a pretty big effort. She's not in foal but she has a nice Sepoy filly on her. We'll try one more with her next year.

"We have about 35 mares on the farm and we win a fair few races so it's going pretty well," he added modestly.

The seven-figure barrier was breached for the second time on Thursday when Guy Mulcaster went to A$1.1m for a son of Snitzel out of Sabanci, an Encosta De Lago half-sister to Group 1 winner Green Birdie, whose further family includes the top-level winners Casino Prince and Onemorenomore.

"He's a lovely colt," said Mulcaster, who was seated close to the rostrum in the packed dining area. "Chris and I really liked him and we've bought him for a number of Chris's clients. We've had good results for these owners before and they're happy to stick with us. We'll let him be a racehorse first and worry about the rest afterwards. That was around what we expected to pay for him, we might not have had any more."

Offered by Arrowfield Stud, the colt is a brother to the Listed-placed two-year-old Bowerman, who is in training with Michael Freedman.

"He had a beautiful kind eye, good bone, good shoulder, there's not a hell of a lot wrong with him," said Bahen. "We've been very active over the last 18 months. We attended the sale here last year and bought five or six colts, we ventured over to Japan in July and bought three colts there and then on the next leg of the exercise we went over to Ireland and bought two colts. We've got some lovely two-year-olds in training, fingers crossed we've got a fast one."

Although the owner's name may be an unfamiliar one at present Bahan said that the Goffs purchases would be remaining in the UK to be put into training. "I bought a Sea The Stars colt and a Kodiac colt. They'll go into work with Ralph Beckett and will race under the name of Acing Lead," the agent said. "Mr Hung's investment is global and he's had a decent whack at the stumps."

Bahen said the colt, whose dam is a three-parts sister to Group 1 winner and Darley stallion Denman, would remain in Australia but that a trainer had yet to be decided upon.

One of the big-name partnerships in action on day two was the combination of WinStar Farm and the China Horse Club, and the powerhouses joined forces to secure a scopey son of Snitzel for A$750,000 from the Newgate Farm draft.

"He's got a hell of a lot going for him, especially being by that stallion," said the China Horse Club's Michael Wallace. "The pedigree speaks for itself. And if his racing performance matches his pedigree and his looks, the sky's the limit. He'll stay in Australia and I'd say he'll be trained by Peter Snowden."

The colt is out of the Encosta De Lago mare Quench The Thirst, a Listed-placed sister to the Group 3 winner Precious Lorraine and Listed scorer Lucky Raquie, and a three-parts sister to Manhattan Rain, a Group 1 winner who now stands at Arrowfield Stud. The inimitable Redoute's Choice also appears under the colt's third dam.

The WinStar and China Horse Club combination has already enjoyed success with a son of Snitzel, with Russian Revolution landing a Randwick Group 2 back in October.

"We've been teaming up with WinStar for a couple years now. We've had a lot of luck with them," noted Wallace. "We started off with them in America and we've got a really nice crop that's just turned three there. We have a horse out there called American Anthem, he's on a Kentucky Derby path and he's a horse we think has serious talent. He's one to watch."

No Doubt for Angus

Just the third lot in the ring, a colt by Not A Single Doubt, drew spirited bidding from a cross section of the assembled purchasers, but it was the familiar figure of Angus Gold who struck the winning bid of A$725,000 on behalf of Sheikh Hamdan's Shadwell operation.

The colt was offered by Attunga Stud and is the fourth foal out of Moccasin Bend, a Group 2-winning daughter of Eternity Range.

"I had hoped being early in the sale not to pay quite so much but sadly there was strong opposition," reported Gold, who was joined in the bidding area by trainer David Hayes.

"He's by a very successful stallion and he looks a nice sharp sort who should make a two-year-old. He looks the right type for the race [Magic Millions 2YO Classic] if he can run. David Hayes loved him, he seemed to have a good mind on him, he was pretty obvious."

While Gold's mind may have been occupied by next year's entrant in the Magic Millions 2YO Classic, this coming Saturday his attentions will turn to Madeenaty, a daughter of Exceed And Excel who is among the favourites for the 2017 renewal of the race.

"Those sales races, with an awful lot of runners, you need a lot of luck. Going into it she seems in good form, David's thrilled with her. I had a look at her yesterday and she looks really well. I think she's got the ability but if she's quite good enough, we'll find out on Saturday," he said. "Sadly the Sheikh hasn't visited Australia for a long time, but he still supports the Australian industry which is very good of him. Hopefully we can come up with something for him."

Back in the Magic Millions ring in 2015 agent James Harron went to A$165,000 for a son of Written Tycoon, a stallion that would finish that season in 20th place in the leading sires' list.

That colt turned out to be subsequent Golden Slipper winner Capitalist, the horse that has propelled Written Tycoon to the top tier of the stallion ranks. In light of Capitalist's achievements Written Tycoon's popularity has soared to such levels that Harron was forced all the way up to A$650,000 for another of his sons during Thursday's session.

The colt, offered by Widden Stud, is out of the Darci Brahma mare Pearl Goddess, an unraced half-sister to Listed winner Mini Pearl.

"I'm very excited to get him, he's a horse we've had our eye on all week. He's a super-moving colt, very professional, which seems to be a great trait of the Written Tycoons," said Harron, who gave a positive assessment of the stallion's talents. "He stamps them pretty well and he gets horses that really get underneath themselves and use every muscle they've got, which this guy did very well."

Despite the increased outlay required to buy the stock of Written Tycoon Harron commented on the general health of the market, saying: "Everyone has their own ideas about what kind of horses they want to target. There's so many horses on the market these days that it balances itself out.

"There are those lots, and this guy's one of them, that everybody wants and it just depends who's prepared to pay the most for that particular horse. I wouldn't say it's getting harder to buy, there's certainly a big appetite for colts, as we've seen. There's also a very healthy on-sell market for horses that aren't going to make it at the top grade."

The transaction also provided a great return for the Redwall Bloodstock syndicate who pinhooked the colt for A$140,000 at the Magic Millions National Weanling Sale in 2016. The syndicate was set up by David Redvers and Hannah Wall of Qatar Racing, and counts rugby star Mike Tindall among its members.

FIRST PUBLISHED 1:23PM, JAN 12 2017
I saw him in the paddock and said ‘George [Altomonte], I'm not leaving the sale without him! He's your next Golden Slipper horse