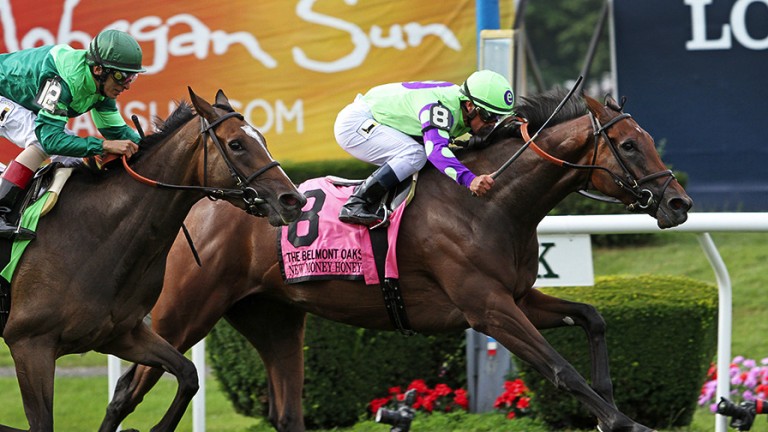 On Tuesday, with less than two weeks remaining until this year's Breeders' Cup takes place at Churchill Downs, the daughter of Medaglia d'Oro stepped off a van at Indian Creek Farm to begin her second career as a broodmare with a date to top international sire War Front on the horizon.

"She really owes us nothing," owner Bob Edwards said of the decision to retire the multiple Grade 1-winner. "She's been a phenomenal filly for us and she's done nothing wrong. At this point she's worth more as a broodmare than she probably could produce running, and we didn't want to risk her getting hurt. (Trainer) Chad Brown has done an excellent job managing her career. She'll always be a special horse for our family."

A $450,000 purchase by agent Mike Ryan from Taylor Made Sales Agency's consignment to the 2015 Keeneland September Yearling Sale, New Money Honey was bred by WinStar Farm out of the Distorted Humor mare Weekend Whim. She broke her maiden at second asking in the Miss Grillo Stakes at Belmont Park and went straight to the Breeders' Cup for her third start, where she won the Juvenile Fillies Turf by a half-length with an exciting three-wide rally at Santa Anita Park.

"It was our first year of racing, going to the Breeders' Cup, and I didn't really even understand what it was," Edwards recalled. "And then our horse wins and I remember standing there and they said, 'Someone wants to take a picture, hold the trophy up.' So I did, and they said, 'No, turn around,' and there was the whole row of photographers lined up on the track and I was blown away by it."

New Money Honey was put away for the remainder of 2016 and after shaking off the dust with a sixth in the 2017 Appalachian Stakes at Keeneland, she won her second start of her three-year-old season, Belmont's Wonder Again Stakes. In her next effort she took the Grade 1 Belmont Oaks Invitational.

"We were walking her into the winner's circle after the Wonder Again and she stepped on my wife's foot," Edwards recalled. "It was purple for weeks. She wanted to get rid of the shoes - you could see the hoofprint on them - but I told her to keep them for good luck, and New Money Honey ended up winning the Belmont Oaks after that."

New Money Honey even ran on dirt, with a fifth in the Alabama Stakes at Saratoga, before she returned to the turf with a sixth in Keeneland's Queen Elizabeth II Challenge Cup. She placed fourth in the American Oaks to wrap up her sophomore season, and returned this year with a June 21 allowance win at Belmont. She was sixth in the July 21 Diana Stakes, but ran second in the last month's Canadian Stakes at Woodbineand closed her career at Belmont with a runner-up finish in the Athenia Stakes. She retires with earnings of $1,516,857 and five wins and three seconds from 13 starts.

"We made the decision last year to get her to War Front, so it should be a really nice first baby," Edwards said. "We believe she can be a foundation mare for us."

FIRST PUBLISHED 4:14PM, OCT 24 2018
We made the decision last year to get her to War Front, so it should be a really nice first baby