The seven-year-old landed the Ascot Chase 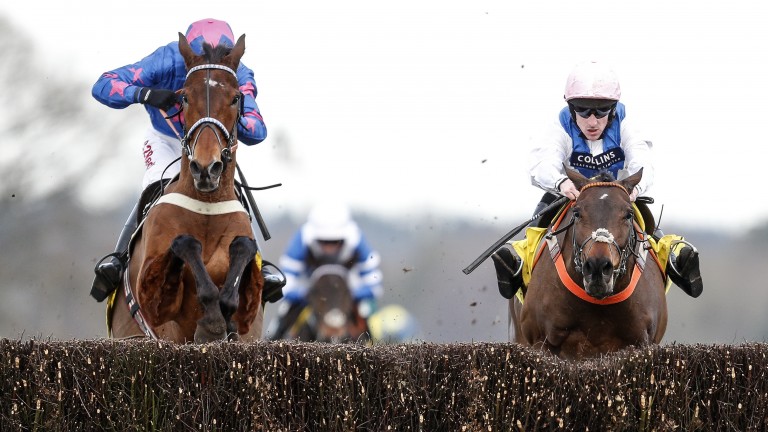 Waiting Patiently (right) and Cue Card fight out a thrilling finish to the Ascot Chase on Saturday
Alan Crowhurst
1 of 1
By Zoe Vicarage 6:10PM, FEB 17 2018

The aptly named Waiting Patiently became the 14th Grade 1 winner for Beeches Stud stalwart Flemensfirth as the seven-year-old stormed to an emotional success for Ruth Jefferson in the Ascot Chase on Saturday.

The victory took Waiting Patiently's tally over fences to six wins from as many starts.

Vincent Finn bred Waiting Patiently out of the unraced Beneficial mare Rossavon, meaning he is a brother to the winning hurdler Walking In The Air.

Victory in the Ascot Chase saw Waiting Patiently become the first Grade 1 winner within the first three generations of his pedigree, though his family has already produced the Listed-placed performers Ciara's Prince, Coffee, Glen Money and Monoceros.

A graduate of the Tattersalls Ireland Derby Sale, Summer Bloodstock parted with €16,000 to secure him at the 2014 edition of the auction.

The seven-year-old is by Beeches Stud resident Flemensfirth, and joins the likes of Imperial Commander, Flemenstar and Tidal Bay as top-level performers sired by the 26-year-old son of Alleged.

Waiting Patiently joins Ainchea, Conrad Hastings and the Grade 1-winning hurdler One Track Mind as being bred on the Flemensfirth-Beneficial cross.

FIRST PUBLISHED 6:10PM, FEB 17 2018
Vincent Finn bred Waiting Patiently out of the unraced Beneficial mare Rossavon, meaning he is a brother to the winning hurdler Walking In The Air

Ballydoyle battalions primed to give Aidan O'Brien a ninth Queen's Vase win Follow the market and you won't go far wrong with Ward's Royal Ascot juveniles Can Love buck the trends for a winning return? Graeme Rodway says it's a big ask Ascot senior veterinary surgeon Dr Svend Kold retires after 30 years in role 'She has an outstanding chance' - Mark Johnston and others on their top hopes 'She's on the upgrade and I believe she'll run above herself next week'