Victor Ludorum bids to follow in father's footsteps in Poulains 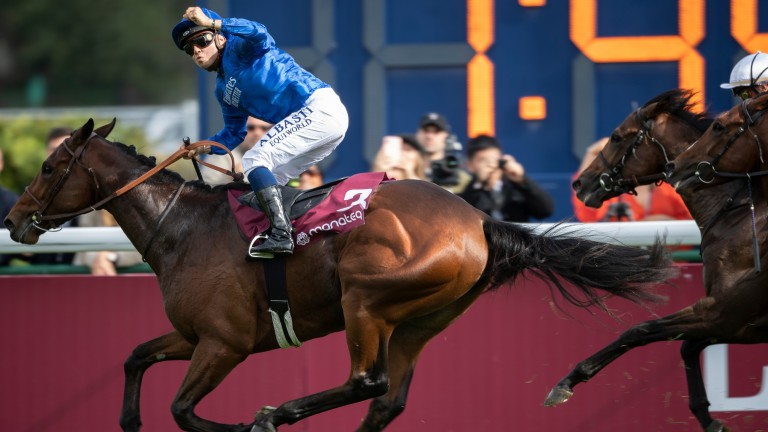 Monday's action ought to be the most exciting day's Flat racing to be run on the first day of the week, with the return of British racing and the first of the Classics.

The rescheduled Poule d'Essai des Poulains and Pouliches – the French version of the 2,000 and 1,000 Guineas – were forced to undergo a late venue change as authorities withdrew its approval to race in parts of Paris. Instead both contests are taking place at Deauville, where racing fans can indulge in two Classics within the space of 35 minutes.

In the Poulains (2.50), Prix Jean-Luc Lagardere winner Victor Ludorum is clear favourite. However, he suffered a shock defeat on France's first day back from lockdown when appearing in need of the run for his seasonal reappearance in finishing only third in the Prix de Fontainebleau. Expected to be sharper for that run, the Andre Fabre-trained colt is still a worthy favourite based on his juvenile form.

By the late Shamardal, who won the Poulains back in 2005, Victor Ludorum was one of three Group 1-winning two-year-old colts by the sire last year, each of whom remained unbeaten at two. This achievement was all the more significant as Shamardal produced just 46 colts in his 2017 crop.

Victor Ludorum is a half-brother to the Irish Oaks-placed Mary Tudor. Interestingly, his third dam is Irish Oaks winner Helen Street, dam of Street Cry and grandam of Shamardal. This makes him inbred 3x3 to the great broodmare on the tail-female line.

Inbreeding to Helen Street on the direct line through Shamardal has already been successfully attempted through Listed winner Shamtee. Jim Bolger's dual Group 1 runner-up Lucida is by Shamardal out of a Street Cry mare.

Fontainebleau winner The Summit had the benefit of a run before lockdown when lowering the colours of Ecrivain and Victor Ludorum in the trial having sneaked in an outing at Saint-Cloud back in March. He has proven himself at the trip and failed to get home when tried over 1m2f at two when favourite for the Group 1 Criterium de Saint-Cloud.

He is out of a half-sister to crack sprinter Chineur and by Wootton Bassett, who was beaten just a few lengths in the Poulains when favourite for the 2011 edition. Wootton Bassett also has two lively outsiders in the Poule d'Essai des Pouliches in Speak Of The Devil and Mageva, who both showed up well in trials three weeks ago.

Ecrivain is by Lope De Vega, a son of Shamardal who pulled off the Poulains-Prix du Jockey Club double for Fabre before siring Irish 2,000 Guineas winner Phoenix Of Spain among nine other Group 1 winners. The sire is also represented by Arapaho, one of three runners in the race for Andre Fabre.

A Group 3 winner at two, the market suggests Ecrivain has a length to find with Victor Ludorum based on the Lagardere form, despite having since reversed that form in the Fontainebleau. He is out of Sapphire Pendant, who placed in the Group 3 1,000 Guineas Trial at Leopardstown for David Wachman and Michael Tabor, before selling for 480,000gns to the Wertheimer brothers in 2012.

Ecrivain hails from a deeply successful family with Kentucky Oaks winner Blush With Pride as his third dam, whose daughters produced the Belmont Stakes-winning siblings Rags To Riches and Jazil, in addition to Peeping Fawn.

The only Fabre-trained runner without a run this year is Alson. The colt has undergone a change of owner and trainer having finished second to Victor Ludorum in the Lagardere before winning the two-runner Group 1 Criterium International by 20 lengths. The race turned into a match after Wichita was withdrawn due to the heavy ground and the supplemented Lady Penelope somersaulted in the stalls.

It could be the biggest day yet for Alson's sire Areion, an elder statesman of the German stallion ranks who is standing at a career-high fee of €12,500 at the age of 25.

A three-time champion sire in Germany, he has been a potent source of stakes winners over the years at 11 per cent winners to runners, though Alson is the sole top-flight winner by the sire. He is out a winning daughter of Galileo and Group 1 Preis der Diana (German Oaks) heroine Amarette, who is a three-parts sister to Melbourne Cup winner Almandin.

Whitsbury Manor Stud resident Showcasing has a chance to sire a first Classic winner through Tropbeau in the Poule d'Essai des Pouliches. The €180,000 breeze-up purchase, who sold at Arqana last year, proved herself at a mile when winning the Group 3 Prix de la Grotte over the distance on her return having previously shown the speed she is bred for when placing in the Group 1 Cheveley Park Stakes over 6f last year.

Showcasing, hailing from a fast Juddmonte family, raced only over six furlongs and his two Group 1 winners to date are the sprinters Advertise and Quiet Reflection.

Tropbeau is out of Frangipanni, a daughter of Dansili who was never tried beyond seven furlongs. Frangipanni is a out of Frizzante, who James Fanshawe trained to win the July Cup. She is a sibling to the admirable sprinters Zidane and Firenze, whom Fanshawe also both trained to big-race success.

Runner-up to Tropbeau in the Grotte was Dream And Do, whose dam Venetias Dream is the subject of a rags to riches story. Rated a mere 51 for Stuart Williams, she attracted just 1,000gns at the Tattersalls February Sale in 2013. Just over a year later, she received a huge pedigree boost through her half-sister, who became dam of dual Group 1-winning miler Charm Spirit. It led to her price rising to 80,000gns at the 2016 Tattersalls December Mares Sale in-foal to Siyouni. The resulting produce is now a live contender for a Classic.

Closely following Tropbeau in the market is Simeen, an unbeaten daughter of Lope De Vega who is stepping up into stakes company for the first time. She quickened up smartly to win snugly on her return and is from a regal Aga Khan family with her dam a half-sister to Champion filly Sarafina.

Lanwades Stud sire Sea The Moon, who has performed well with his first two crops, could have a breakthrough Group 1 winner in Tickle Me Green, who hails from a Cheveley Park Stud foundation family that includes Veracious and Garswood.

Despite no overseas challengers allowed to compete in either Classic, both contests are worthy Group 1s representing the cream of the French three-year-old crop. We can only hope the winners are soon allowed the opportunity to show their credentials against the best from Britain and Ireland, whose Guineas will each be run within the next fortnight.

The Racing Post newspaper is back in shops! With extensive coverage of all the racing, interviews with the biggest names, tipping from our renowned experts and all the cards and form, it's your unmissable guide to all the action. Don't forget to pick up your copy

FIRST PUBLISHED 6:00PM, MAY 31 2020
Victor Ludorum was one of three Group 1-winning two-year-old colts by the sire last year, each of whom remained unbeaten at two