Valyssa Monterg on top as jumps sale ends with turnover down 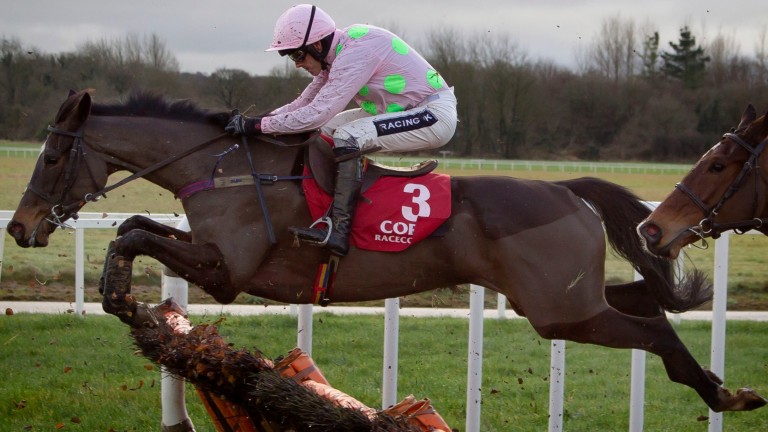 The headline act in a mares’ session that showed increases in both the average and median price, despite a drop in turnover and lots sold, was one of three mares consigned by champion trainer Willie Mullins.

It was the third year in a row that a Closutton Stables mare topped the sale by realising a six-figure price.

A seven-year-old daughter of Network, Valyssa Monterg won three races in her native France before adding three more successes to her CV in Ireland carrying the colours of Susannah Ricci. The former Galway Festival winner was bought carrying a foal by Burgage Stud sire Shantou for €160,000 by Colm Murphy for Tomgar Bloodstock.

Murphy also struck for a stable companion of the sale-topper, paying €42,000 for Bayside Belle, an unraced half-sister to four black-type performers including Pique Sous and Pancake.

“They have two fabulous pedigrees,” said Murphy of the mares. “Valyssa Monterg is a pure model of a horse and she has done it on the track. Bayside Belle will be covered in the spring and both horses have been bought for the same client and will be staying in Ireland.”

It was the first major purchase of Murphy’s new career since the man responsible for guiding Brave Inca and Big Zeb to stardom announced his shock retirement from training in September.

The sale also represented another feather in the cap for the burgeoning reputation of Shantou as it was the third year in succession that the most expensive mare sold at the November Sale was in foal to the Burgage Stud resident. It capped an excellent sale week for the son of Alleged, who saw his average foal price increase yet again to €25,000, bettered only by the kingpins Flemensfirth, Kayf Tara and Presenting.

Shantou was also the covering sire of another mare from Closutton to sell, the winning hurdler and chaser Uranna was sold to Paul McGrath for €36,000.

The second highest-price of the day was achieved by Prettyasapicture, in foal to sire of the moment Walk In The Park. By King’s Theatre and a winner over hurdles, she is a sibling to four black-type performers including Diamond Sal and Ring The Boss.

“She will be going to an established stud who are looking to upgrade the quality of their broodmares while reducing their numbers,” explained Nolan. “The Walk In The Park covering is a good one and she comes from a good family that sells well. They really liked her - I picked out a few mares to show them today and she was their favourite.”

The median in the session leapt 25 per cent to €10,000, while the average showed a slightly more modest improvement of 15 per cent.

The median remained static at €10,500 and the average showed a slight improvement of three per cent to €14,264.

Poor clearance rates at the Flat yearling sales earlier in the season were continued at the sale. Over the six days at Fairyhouse 1,250 horses, ranging from foals to broodmares, were offered for sale but only 844 changed hands for a clearance rate of 68 per cent, compared with 924 lots out of 1,314 offered (70 per cent) finding new homes in 2015.

FIRST PUBLISHED 4:22PM, NOV 11 2016
The Walk In The Park covering is a good one and she comes from a good family that sells well