US breeders optimistic about the thought of Trump presidency

No immediate concerns among the industry following the election 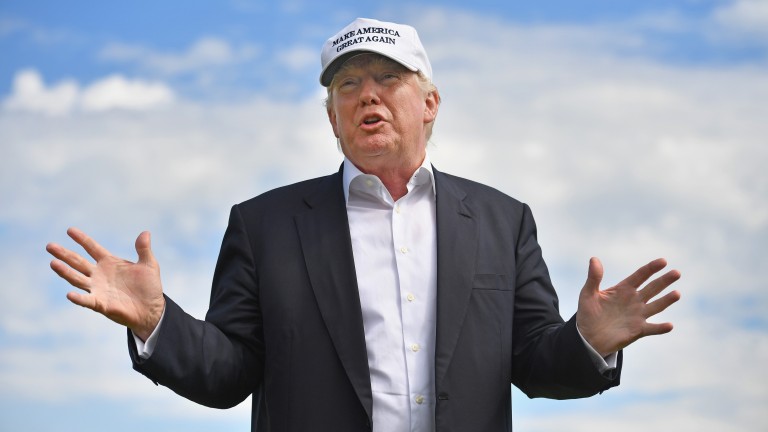 The election of Donald Trump as America's next president may have generated shockwaves around the world, but within the confines of the Keeneland sale pavilion in Lexington, business has clicked along at a strong, undeterred pace during the November breeding stock sale.

Overall, as expressed by their spending and their opinions, American breeders and owners seem optimistic about the future following the election.

After all, some pointed out, Trump even hailed legendary Triple Crown winner Secretariat in his election victory speech, referring to the horse as a superstar and acknowledging the sport as few national political leaders do.

"That was great for racing. At least we got a little spotlight," said Dan Metzger, who has been president of the Thoroughbred Owners and Breeders Association since 1999, while adding that, like many, he thinks it is too early to predict exactly what might occur during a Trump administration.

But despite Trump's outspokenness and widespread predictions that Hillary Clinton would win, there were no major concerns immediately apparent among thoroughbred industry leaders following the election.

After the first 11 sessions of the 13-day Keeneland sale, the average price of $89,708 was down only two per cent as a total of 19 fillies, mares and weanlings trotted through the ring and sold for $1 million or more.

With Trump in the White House and his Republican Party in control of the United States Senate and House of Representatives, there could be a national policy shift toward less taxation and less regulation, some sale participants said. That kind of governance, as opposed to the past eight years under President Barack Obama, typically fosters a positive environment for racing and breeding, they suggested.

"You've got to think that in the long run Trump is going to be the guy that when the dust settles, in spite of all the rhetoric that is out there, he's only going to help the industry," said Spendthrift Farm general manager Ned Toffey, after noting not only the strong sales at Keeneland but surging American financial markets.

A bull run on Wall Street did not end after an initial upswing following the vote count on November 8. Almost a week after the election, the Dow Jones Industrial Average - the most frequently cited US stock market index - climbed to an all-time high of 18,868.69.

Like Toffey, Taylor Made Farm vice president of marketing and public sales operations Mark Taylor said he believes Trump ultimately could benefit racing. He said that, while he was worried there would be some initial market volatility after the election, he did not notice any reaction.

"My gut feeling is that Trump is going to enact some policies that might help the oil and gas sector, and I think that [sector] has been one reason that our yearling market has been a little flat," he said.

"In North America, we have so many guys who like to play the horses that are from Oklahoma, Texas, and western Canada, and I think they've been taking it on the chin with the low oil prices."

Change that could come with a Republican-controlled government could be beneficial in other ways.

"A lot of the people I know that are small- to medium-sized business owners have been really saddled with [issues like health care law] Obamacare and whatever - there has just been a lot of regulation," Taylor added. "From the business side of it, we've just been burdened with more and more regulation, more and more basic taxes."

He noted that Obamacare alone has cost Taylor Made an extra $100,000 a year.

"It's just harder and harder to run a business," he said. "I don't know if Trump is going to answer our problems, but if we could get relief from some of those regulations, hopefully that is going to help a lot of people and then, if it does, they're going to have more disposable income to put into the horse business."

When Mandy Pope of Whisper Hill Farm bought the sale-topping Unrivaled Belle for $3.8 million after earlier purchasing two other seven-figure mares, she stated that she is hoping Trump's election eventually will lead to better economic conditions.

"We hope the economy will move forward and hopefully we'll have more money for purses. We hope Trump is a racing man. He's a big gambler, so we'll see if he'll put a little investment into the horse industry," said Pope, referring to Trump's casino investments.

"The election shocked many of us - most people - but it looks like it hasn't affected the market," he said. "It's still hard to buy a good horse and easy to sell one."

The strength of the stock markets and a concurrent rise in the strength of the US dollar in the days after the election bode well for the American thoroughbred industry, he said, predicting that Americans can more often be buyers of top bloodstock around the world with a strong dollar.

"With the dollar being strong, it makes it easier for us to go to other countries and buy, which is fantastic. We can bring new blood back here," Hancock said.

"If the horse industry continues on its upward swing, you'll see more and more well-bred horses come back here, hopefully."

FIRST PUBLISHED 4:01PM, NOV 21 2016
You've got to think that in the long run Trump is going to be the guy that when the dust settles, in spite of all the rhetoric that is out there, he's only going to help the industry
Bookmaker
Price
E.W. Terms
bet365
Open Account
Ladbrokes
Open Account
William Hill
Open Account
Coral
Open Account
Paddy Power
Open Account
Betfair
Open Account
Sky Bet
Open Account
Sporting
BetVictor
Boylesport
888sport