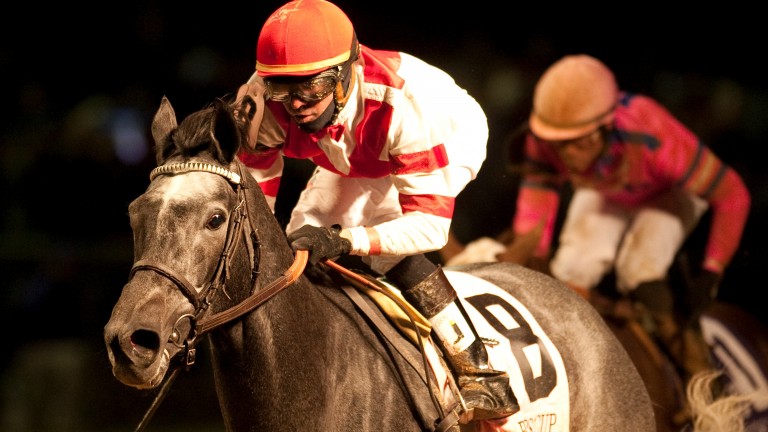 Unrivaled Belle: sold for $3.8 million at the Keeneland November Sale in foal to Tapit
Edward Whitaker
1 of 1
By Martin Stevens 4:13PM, DEC 29 2016

The most expensive lot sold at auction anywhere in the world this year was not that expensive at all – judging against the often bizarre standards set by high stakes horsetrading, at least.

The $3.8 million it took for American boutique breeder Mandy Pope to purchase Grade 1 winner Unrivaled Belle at Keeneland last month was the second lowest price for an annual sale-topper in the new millennium after the $3.1m paid by the Wertheimer brothers for Honest Pursuit at the same venue in a recession-hit 2009.

There is another parallel between 2009 and 2016, in that the top price would have been higher but for a high-profile buyback. In 2009 prolific Grade 1 winner Azeri had been bought back by the Allen E Paulson Living Trust at the Keeneland January Sale for $4.4m only to be sold to Katsumi Yoshida for $2.25m at the company’s November fixture.

This year, another mare of immense value – Bubbler, who produced Arrogate as her first foal – failed to change hands at $4.7m when offered by her owner Clearsky Farm at Fasig-Tipton two days after Arrogate’s famous Breeders’ Cup Classic victory.

What does that tell us about the state of the market? It is probably unwise to extrapolate a view on wider trade from a few select prices but there did seem to be a lower ceiling than usual at the top end.

Unrivaled Belle also marked the first time that the most expensive auction horse of the year was a mare already in breeding service since 2008, when the ceiling was well and truly broken by Better Than Honour, the dam of Belmont Stakes winners Jazil and Rags To Riches, when she achieved a price of $14m.

American breeder Mandy Pope, who with her brother co-owns a family-grown chain of discount retail stores in the southern states, has spared no expense assembling an elite band of broodmares to breed from. It includes 2011 US horse of the year Havre De Grace (cost $10m), Betterbetterbetter, a Galileo three-parts sister to Quarter Moon and Yesterday ($5.2m), and Grade 1 winners Plum Pretty ($4.2m) and Groupie Doll ($3.1m) and, since last month, Unrivaled Belle.

A ten-year-old daughter of Unbridled’s Song, Unrivaled Belle was one of the best of her sex at the turn of the decade, winning the Grade 3 Rampart Stakes and delivering a shock victory over Rachel Alexandra in the Grade 2 La Troienne Stakes before taking the notable scalps of Blind Luck and Havre De Grace when successful in the Breeders’ Cup Ladies’ Classic in 2010.

She had been bought by Brushwood Stable for $2.8m at the 2011 renewal of the Keeneland November Sale and was among a number of high-profile lots from Betty Moran’s operation to go on sale at the venue this year.

Pope had to stretch to $3.8m to secure Unrivaled Belle by seeing off Don Alberto Corp, which races the mare’s promising Tapit two-year-old filly Unique Bella.

“She’s gorgeous,” Pope said of her new acquisition. “We have good thoughts about the two-year-old. Hopefully, she’ll go on and do something.

“We’ll breed Unrivaled Belle back to Tapit. What a hell of a racemare. She’s a big-sized mare, rangy, good bone, but not overly huge. She’s a good fit for Tapit.”

Baffled is a true golden goose, with all her three runners having scored in Pattern races. Constitution, a son of Tapit who was her first racecourse representative, landed the Florida Derby and Donn Handicap; next came Jacaranda, a Congrats filly who scored in a Grade 3; and this year her More Than Ready two-year-old colt Boynton won the Superlative Stakes for Charlie Appleby in July.

The Distorted Humor mare, who finished third in the Albany Stakes for Jeremy Noseda, also has a fine pedigree as a sister to Meydan Group 2 winner Surfer and half-sister to Grade 1 Forego Stakes winner Emcee. She was presented at Fasig-Tipton last month carrying a full-sibling to Constitution.

Baffled was bought by John Malone’s Bridlewood Farm for $3.5m, with Don Alberto Corp, who had been among the other bidders, later brought in as a partner.

All in all a good result for Twin Creeks Farm, which bought Baffled outside of the ring when she failed to sell at $360,000 at the 2013 Keeneland November Sale when she was carrying Boynton, who Twin Creeks sold as a yearling for $750,000.

Sheikh Mohammed’s activity – or lack of it – at the early-season yearling sales was the talk of the bloodstock industry. When confirmation came in the autumn that Godolphin were carrying out a ‘pruning’ of stock by selling a larger number of yearlings and mares at auction, speculation intensified as to the buying plans of the single biggest investor in bloodstock of the last 35 years.

But later sales showed the sheikh had not lost his appetite for those yearlings and mares with the best credentials. Godolphin chief executive John Ferguson bought 26 lots for 13,910,000gns at Book 1 of the Tattersalls October Yearling Sale, accounting for 16 per cent of turnover, and made several strikes at Keeneland and Goffs in September.

The furthest Ferguson had to stretch to publicly bolster Godolphin’s ranks was to $3.5m for the six-year-old mare Secret Gesture.

The daughter of Galileo was bred by Newsells Park Stud and retained by the operation when she failed to reach her reserve as bidding stalled at 230,000gns at Book 1 of the Tattersalls October Yearling Sale. She went on to win the Lingfield Oaks Trial by ten lengths, after which Qatar Racing came on board and she finished second in the Oaks and won the Beverly D Stakes only to be disqualified in controversial circumstances.

Secret Gesture was offered in foal to War Front, making her the latest Galileo mare to sell in foal to the Claiborne Farm sire for an enormous sum after Betterbetterbetter, Aloof, Up, Terrific and Precious Stone who sold for $5.2m, $3.9m, $2.2m, $1.9m and $1.8m.

Some 8,950,000gns of the 13,910,000gns, nearly two-thirds, Ferguson spent at Book 1 of the Tattersalls October Yearling Sale went on lots by Dubawi. He bought eight by the Darley flagbearer, including three who cost seven figures.

Sheikh Mohammed will have plenty of his own extremely well-bred Dubawi two-year-olds to go to war with in 2017 but he clearly seems intent on having the best offspring of the sire produced by outside breeders carry the royal blue silks as well.

The most expensive of Ferguson’s Dubawi yearlings was the colt out of Coronation Stakes heroine Fallen For You offered by Norris Bloodstock on behalf of breeder Philippa Cooper’s Normandie Stud.

In a bid to rationalise numbers and raise money, Cooper was putting her yearlings on the market for the first time since 2006 when she was put off selling by the market rejecting some of her slower-maturing stock including future Irish St Leger hero Duncan who was a 100,000gns buyback.

“That was why I stopped selling – maybe I didn’t prepare them well enough or they were too backward and I expected people to see through that and imagine what they were going to be like,” Cooper said when the Racing Post revealed her plans to sell the cream of her crop.

The Meon Valley Stud draft is always keenly anticipated at Book 1, as it offers the chance to buy into the famed Hampshire nursery’s brilliant bloodlines. This year it was graced by a number of timely updates, which enhanced expectations even more.

Two days before the auction started, Meon Valley homebred Speedy Boarding won the Prix de l’Opera. That filly’s half-brother by flying first-season sire Frankel came under the hammer in the first half-hour of trade and was knocked down to Shadwell for 500,000gns, and has been named Elwazir.

Then, on the second day of the sale, Dreamfield – the Oasis Dream colt out of another Meon Valley Stud-owned and bred Prix de l’Opera winner, Izzi Top, and a 1,100,000gns Godolphin yearling buy at Book 1 in 2015 – broke his maiden by eight lengths on his debut at Nottingham.

The day before, Meon Valley Stud had sold a Dansili half-brother to Dreamfield to China Horse Club and Mayfair Speculators for 325,000gns, but the update came in time for the Dubawi half-brother to Izzi Top – out of another Meon Valley winner of the Prix de l’Opera in Zee Zee Top – offered 24 hours later and he was sold to Shadwell for 2,600,000gns.

Mark Weinfeld of Meon Valley Stud said at the end of his eventful week in early October: “It’s been hugely exciting and unbelievable really. It’s been a rollercoaster ride and I’ve been pinching myself this week to make sure I’m still awake and not dreaming.”