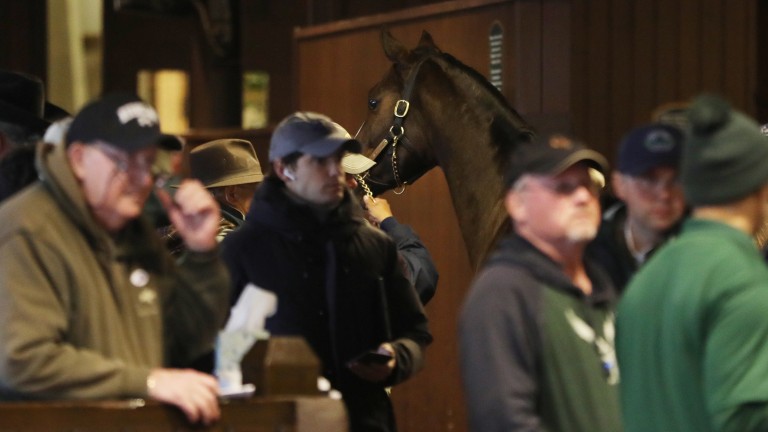 Arif Kurtel, a prominent businessman and horse breeder and owner from Turkey, has had success with horses he purchased at the Keeneland November Breeding-Stock Sale.

So it was not surprising Kurtel led a deep international buying bench that sustained Saturday's penultimate session of the auction that concludes on Sunday.

Among Kurtel's previous November purchases were broodmares Cumulus and Borrowing Base, both purchased on his behalf by Omer Halim Aydin. Borrowing Base, a Personal Flag mare bought for $25,000, is the dam of Long Runner, a son of Gio Ponti who has won three Turkish Group 1 races and earned the US equivalent of $383,030.

Cumulus, a $10,000 November purchase, produced The Last Romance, a daughter of Tizway whose six Group victories in Turkey include the Gazi Derby, the most prestigious race in the country. The Last Romance has earned the equivalent of $624,606 while winning eight of 13 starts.

Murat Sancal, an American-based trainer who trains for Kurtel, said the Quality Road mare epitomises the kind of US bloodlines the owner is seeking for his stable. While Kurtel races primarily in Turkey, Britain, and Dubai, he plans to expand his racing program in the US.

"All the American pedigrees match well with our racing programme, and we can get future stallions with horses we get from here," Sancal said, adding the US pedigrees are desirable because they are replete with horses that had speed and performed well on dirt.

"The European horses are not the same because they like soft ground. We love the American pedigree, especially the Storm Cats, Kitten's Joys, and Tizways. He will send most of them [to Turkey], but some will be back here."

Common Hope was one of Kurtel's first Keeneland purchases when acquired for $125,000 out of the November sale in 2011 after the mare produced eventual multiple Grade 1 winner Shared Belief the previous spring.

One of Kurtel's US-based runners is Shared Legacy, a full-brother to champion Shared Belief who was bought back by the owner for $1.9 million at the 2017 Keeneland September Yearling Sale. The son of Candy Ride is winless in five starts for Sancal, most recently finishing fourth in a maiden special weight at Churchill Downs this month.

Buyers hailing from South Korea and Dubai were also prominent during Day 11.

Korean-based KOID went to $53,000 to take home Yara, a ten-year-old Put It Back mare in foal to Gormley that was the session's second-highest-priced offering. A winner of the Davona Dale Stakes who earned $398,390, Yara was consigned by Paramount Sales, agent for Spendthrift Farm.

Yara was produced from the Gilded Time mare Ashlee's Lady, who also produced stakes-placed Gotta Get Paid and is the granddam of Puerto Rican champion Derek Adrian.

Cromwell Bloodstock, on behalf of trainer Wesley Ward, paid $34,000 for Saturday's most expensive weanling, a colt by Midshipman consigned by Scott Mallory. Out of Canigetayesma'am, a winning daughter of Salute the Sarge, he is from the family of Grade 3 winner Mintage.

The final session of the Keeneland November sale begins Sunday at 10am local time.

FIRST PUBLISHED 6:27AM, NOV 17 2019
All the American pedigrees match well with our racing programme, and we can get future stallions with horses we get from here