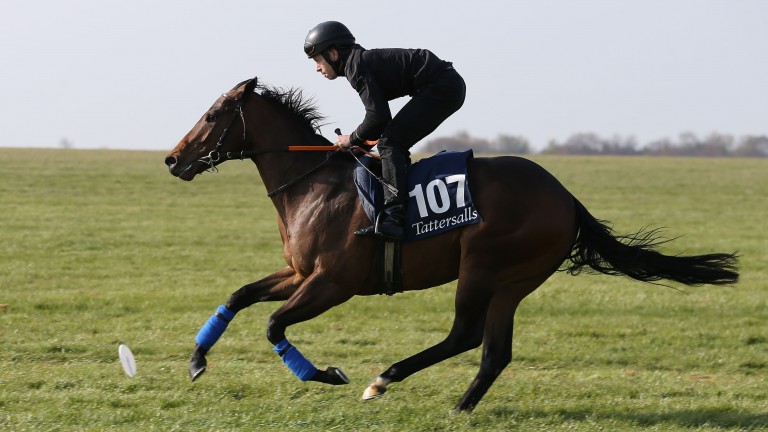 Micky Cleere puts Majestic Sands through his paces at the Tattersalls Craven Sale
Laura Green
1 of 1
By James Thomas UPDATED 4:12PM, MAY 28 2019

Majestic Sands showed considerably more zip than his illustrious half-brother, Gold Cup winner Trip To Paris, was famed for when making a successful debut over 5f in the British Stallion Studs EBF Novice Stakes at Leicester on Tuesday.

The Richard Fahey-trained son of Kodiac, who scored by a comfortable three-quarters of a length, was bought by the Cool Silk Partnership and Stroud Coleman Bloodstock at the Tattersalls Craven Breeze-Up Sale for 90,000gns when offered by Star Bloodstock.

Bred by Paul and TJ Monaghan, Majestic Sands is the eighth foal out of the Fantastic Light mare La Grande Zoa, who has now produced four winners. With Majestic Sands now bound for Royal Ascot, the dam will be bidding to join a select band of broodmares to have supplied more than one winner at the flagship meeting.

While Trip To Paris, himself a graduate of the Tattersalls Guineas Breeze-Up Sale when bought by Federico Barberini for 20,000gns, is best known for his exploits over 2m4f in the Royal Ascot Group 1, he did also score at two, breaking his maiden on his second start over 7f at Lingfield.

He went on to record five more victories, including the Chester Cup, and also finished second to Mongolian Khan in the Group 1 Caulfield Cup. 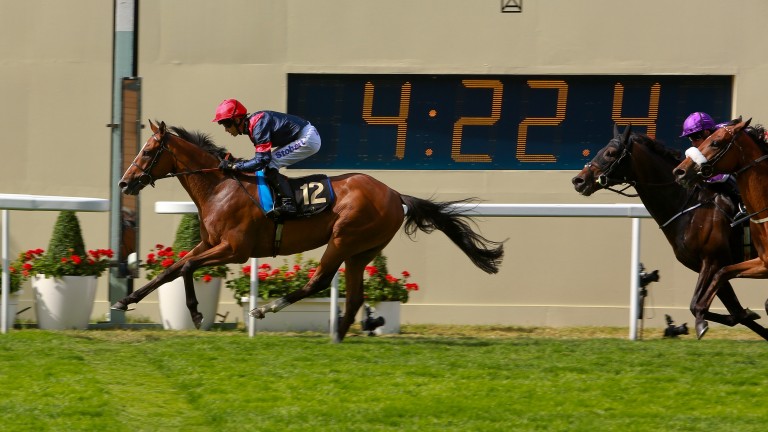 Trip To Paris lands the Gold Cup at Royal Ascot in 2015
Mark Cranham
The son of Champs Elysees is seeing out his well-earned retirement at the National Stud in Newmarket.

La Grande Zoa's last registered foal is Majestic Sands and she was covered by Yeomanstown Stud flagbearer Dark Angel in 2018.

The runner-up at Leicester was also a graduate of the Star Bloodstock academy, with Cool Sphere, a son of Claiborne Farm's Orb, another to have been picked from the outfit's Craven Sale draft by the Cool Silk - Stroud Coleman axis for 120,000gns.

Majestic Sands had appeared at the sales twice before the Craven Sale, first when pinhooked by Mags O'Toole for 100,000gns as a foal, and then when selected by Star Bloodstock for £77,000 at the Goffs UK Premier Yearling Sale, where he was offered by Lynn Lodge Stud.

Majestic Sands is the second winner to graduate from Star Bloodstock's 2019 crop, after Harswell, also a son of Kodiac who was purchased for £16,000 at Ascot, gave trainer Liam Bailey a first winner earlier in the month.

FIRST PUBLISHED 4:04PM, MAY 28 2019
The Richard Fahey-trained son of Kodiac was bought by the Cool Silk Partnership and Stroud Coleman Bloodstock at the Tattersalls Craven Breeze-Up Sale

Without Parole set for strong support as big breeders reveal early mating plans 'Nobody seeing the Cirrus Des Aigles videos would have a doubt about welfare' Breeding right in Mehmas lures €195,000 bid at Arqana's online sale 'He's as nice a foal as I've brought to the December Sale in ten years' Tattersalls releases 2021 dates for breeze-up sales as signs of normality grow Ebendi bought by Joseph O'Brien for €165,000 at Goffs' single-horse sale