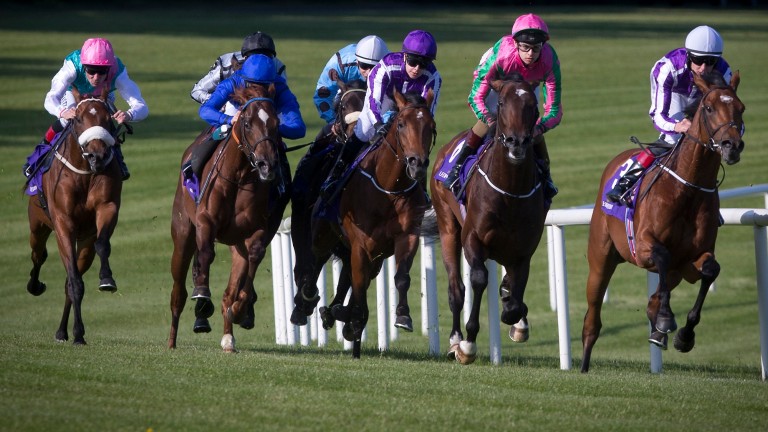 Leopardstown: racing in Ireland resumes at Leopardstown on Thursday
Patrick McCann
1 of 1
By Ollie O'Donoghue 9:48AM, MAY 26 2018

Maiden races at Leopardstown rarely fail to deliver on quality and Friday's two-year-old contest over 7f - won in the past by such brilliant performers as Alfred Nobel, Arazan and War Command - certainly lives up to expectations.

The most obvious starting point is the trio of newcomers declared by Aidan O'Brien, who won the race most recently with War Decree in 2016 and three years before that with War Command, who went on to win the Dewhurst Stakes.

While all three are colts by the mighty Galileo, Ryan Moore has opted to ride Cape Of Good Hope - and he knows the family well.

He rode his six-year-old brother Highland Reel - who now has a berth at Coolmore Stud - to five of his seven top-flight wins, and was also in the saddle when their brother Idaho won the Ormonde Stakes at Chester earlier this month.

Cape Of Good Hope is a son of Danehill mare Hveger, who was bought by Coolmore as a regular mate for Galileo, and is bred on the same cross as dual world champion Frankel and other exceptional talents such as Intello, Noble Mission, Roderic O'Connor and Teofilo.

Seamie Heffernan has been penciled in to ride Albuquerque, a brother to three-time Group 1-winning miler Rip Van Winkle, the world's champion miler in 2009, and half-brother to Group 3-winning miler Le Vie Infinite, who supplied his first winner at stud in Italy earlier this month.

Donnacha O'Brien will ride the last of the trio, Christmas, whose three siblings to race all reached the podium in Group company. They are out of Ashland Stakes scorer Christmas Kid, who was the second most expensive lot at the 2011 Keeneland November Sale when purchased by Aisling Duignan for $4.2 million (£3,130,000 / €3,580,000).

Putting it up to them will be Andaleep and Eagle Song.

The Dermot Weld-trained Andaleep, a son of Siyouni and German Listed winner Oriental Magic, was bought for €180,000 at the Goffs Orby Sale and he can improve on his debut fourth at Dundalk behind Scat Daddy filly Skitter Scatter, who has since been placed in Listed company.

Eagle Song, trained by Joseph O'Brien, is also open to improvement on his sixth-place debut finish at Dundalk. The colt is by No Nay Never - who sired his first stakes winner on Sunday - and out of Group 3 sprint runner-up Al Ihsas, a daughter of influential broodmare sire Danehill.

FIRST PUBLISHED 9:47AM, MAY 26 2018
Maiden races at Leopardstown rarely fail to deliver on quality and Friday's two-year-old contest over 7f certainly lives up to expectations