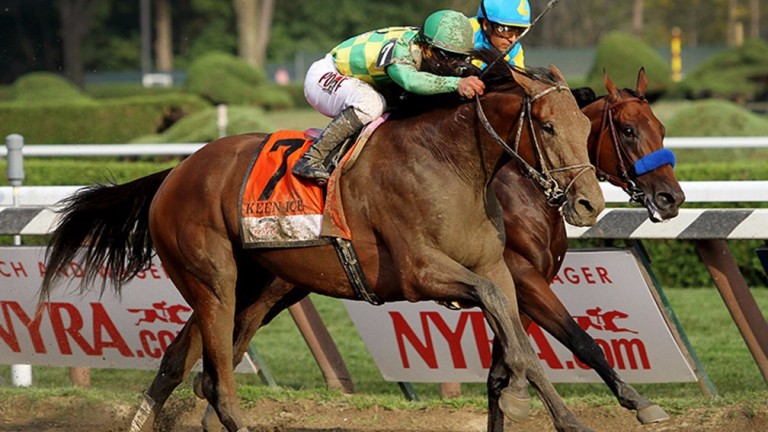 Keen Ice, the 2015 Travers Stakes-winning son of Curlin, is to take up stallion duty at Calumet Farm in Lexington, Kentucky, at the end of his racing career.

Trained by Todd Pletcher, the five-year-old is currently being prepared for a tilt at the Group 1 Pegasus World Cup Invitational at Gulfstream Park on January 28.

"We are excited to offer this exceptional looking son of Curlin to our breeders," Calumet director of stallions Jak Knelman said. "As the only horse to beat champion American Pharoah during his three-year-old campaign, Keen Ice will be an appealing dirt option among our diverse stallion offerings.

"We look forward to supporting Keen Ice in the breeding shed, sales ring, and his progeny on the track."

Bred by Glencrest Farm, Keen Ice is the first foal out of the once-raced Awesome Again mare Medomak, who is a half-sister to Grade 3 winner Coal Play and a granddaughter of the Grade 2 winner Tara Roma.

Keen Ice has won one of his 17 career starts, but by virtue of some notable placings, such as finishing runner-up in the Haskell Invitational and third in the Belmont Stakes and the most recent renewal of the Breeders' Cup Classic behind Arrogate and California Chrome, he has amassed $2,387,245 (£1,917,311/€2,223,485) in earnings.

He will join the likes of English Channel and Oxbow on the Calumet Farm roster.