Son of Kodiac also in the limelight at Park Paddocks 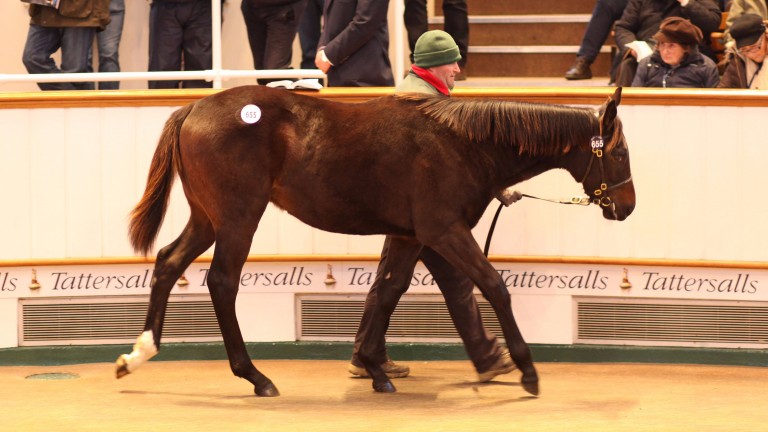 First-crop foals were a big draw during the opening session of the Tattersalls December Foal Sale and that theme continued into a much stronger second day on Thursday as a son of National Stud resident Toronado brought the joint session-topping sum of 190,000gns from Jim McCartan.

The colt is a half-brother to Geoffrey Freer Stakes winner Agent Murphy, and was bred by James Stewart's Wellsummers Stud out of the unraced Dansili mare Raskutani.
"He was probably the most shown foal I've ever brought to the sales," said Stewart. "I'd like to pay credit to the land in Wiltshire, which is just exceptional. The bone we produce and the results we've had on the track say an awful lot for the downland that we have there."

The on-course successes of Wellsummers Stud's stock has also been mirrored in the sales ring, with the colt's Azamour half-brother having sold to Roger Varian for 230,000gns during Book 2 of the October Sale.

"We all thought he was an exceptional foal and we waited for him," said McCartan, who signed on behalf of a partnership between himself, his brother Paul and Michael Carty of Kilmoney Cottage Stud. "We went to see him again in the back ring and it confirmed our impression.

"It's a lot to spend on a foal by a first-crop sire but Toronado was a very good horse. I also liked this lad's half-brother by Azamour in October - hopefully Roger will help us a bit! He's been bought for resale so fingers crossed."

There could be further success for Stewart to celebrate, as Raskutani is entered in the mares section of the December Sale in foal to Night Of Thunder.

The daughter of Dansili is a half-sister to Group 2-winning Hatta Fort and Group 3 winner Blue Bayou out of Wellsummers' foundation mare Oshiponga.

That price was brought for a second time on Thursday when Anthony Stroud snapped up a colt by Kodiac offered by Trickledown Stud on behalf of Ballydogen Stud. The February-born foal is the first produced by Inyordreams, a Listed-winning daughter of Teofilo.

"He's been bought for resale," said Stroud. "He's an athletic colt, a good racy Kodiac with a good pedigree."

The colt was bred by Andrew and Jane Ellis of Bolton Grange Stud.

"You have expectations when you set off," said Andrew Ellis, "It's nice when they're fulfilled. We've had the family a long time - right down the page. He's the first foal out of the mare. We thought Kodiac was value at the time and she's now in foal to Lethal Force."

The session's second-top lot came in the shape of an Invincible Spirit colt offered by Bumble Mitchell, who went the way of Godolphin chief executive John Ferguson for 180,000gns. Out of the Mitchell-bred Tobougg mare Kerry's Dream, the colt is a half-brother to Listed Redcar Two Year Old Trophy winner Ventura Mist.

"This colt has been exceptional and he was outstanding from day one," said Mitchell. "He's been very busy here. I'm delighted, he's a lovely foal with a wonderful temperament. That's the biggest price we've achieved for a foal."

The leading light before the sun began to set on Park Paddocks also went the way of Ferguson, with a colt by the pensioned Cape Cross bringing 170,000gns. The brother to Park Hill Stakes runner-up Melodious is out of the Group 3-winning Singspiel mare Gower Song and was offered by Usk Valley Stud.

"He's always been a nice foal, very light on his feet and a good mixture of his dam and sire," said Kevin Mercer of Usk Valley Stud.

"We bought Gower Song as a yearling [for 17,000gns for David Elsworth] and she's been a fabulous mare for us. David said that Melodious was a Group 1 filly and in fairness, he tried his best to get this colt.

"We've always been big fans of Cape Cross. He's had his ups and downs but we've been with him all the way through, and now we have some nice young mares by him on the farm."

Gower Song is a half-sister to the Group 2-placed Prince Of Denial as well as the Listed-placed Faraway Waters, the latter of whom is the dam of another good Elsworth-trained filly in Something Exciting. The daughter of Singspiel is one of 18 mares at Usk Valley Stud and is currently in foal to Sea The Stars.

The market this year has been gripped by Dark Angel fever, and there was no sign that buyers' hunger for the progeny of the Yeomanstown Stud resident had subsided as a number of bidding duels broke out over his sons and daughters.

The most notable lot by the son of Acclamation was a colt offered by Nick Bradley's Glebe Farm Stud, who went the way of Blandford Bloodstock's Richard Brown for 145,000gns.

"He's a good model for the stallion, who keeps going from strength to strength," said Brown.

"Obviously there has been a huge pedigree update - Wuheida is an Oaks favourite now so that will give us something to cheer on next year! You can't beat an active pedigree. He's for Corduff Stud and is down for resale."

The colt is out of Secrets Away, a Refuse To Bend half-sister to Hibaayeb, the dam of unbeaten Group 1 Prix Marcel Boussac winner Wuheida.

After a rather low-key opening session it didn't take long for trade to go up several gears on Thursday. It was barely 30 minutes into Thursday's session when the six-figure barrier was broken for the first time, with Yeomanstown Stud's David O'Callaghan going to 125,000gns for a March-born filly by Iffraaj and out of the Listed-winning Tamayuz mare Ighraa consigned by Aston Mullins Stud.

"Plan A would be resale," said O'Callaghan. "But we might keep her. She's a very nice filly by a sire who's capable of getting good fillies and she's out of a good racemare, so she should be what people like next year. But we could race her - you never know, stranger things have happened!

The filly is out of a half-sister to Listed winners Nashmiah and Streets Ahead and descends from the family of Grade 1 winner Forti Dei Marmi.

Later in the session another daughter of Iffraaj generated a six-figure sum, when Philip Stauffenberg went to 130,000gns for the filly out of Zayn Zen, a Listed-placed daughter of Singspiel.

The filly's page had received a big update since the catalogue had been produced with her three-year-old half-brother Ennaadd, who is in training with Roger Varian, having completed a four-timer with victory in the Listed Hyde Stakes earlier this month.

FIRST PUBLISHED 4:45PM, NOV 25 2016
He's always been a nice foal, very light on his feet and a good mixture of his dam and sire