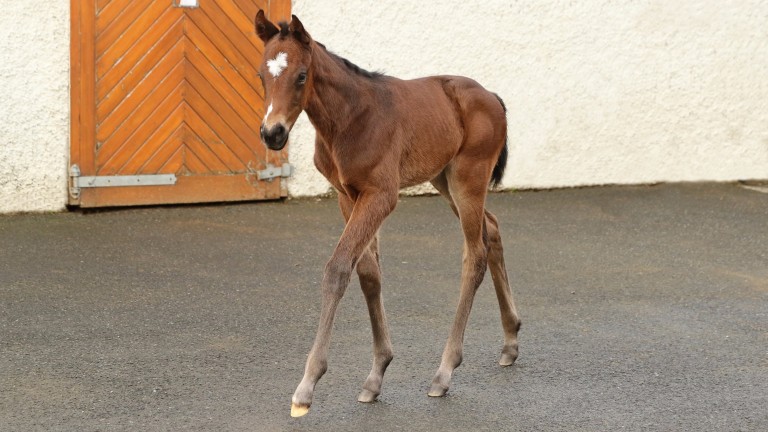 Islington foal: daughter of Oasis Dream is the 11th consecutive filly produced by her dam
Peter Mooney
1 of 1
By James Thomas 5:51PM, FEB 6 2017

Eleven fillies from 11 foals – that is the remarkable record of outstanding racemare Islington at paddocks after her latest offspring by Oasis Dream arrived at Ballymacoll Stud in County Meath at the end of last month.

“She’s a lovely foal,” said Ballymacoll manager Peter Reynolds. “It’s absolutely incredible. Islington lost one foal in America [when covered by Storm Cat in 2007] and I’m not absolutely certain, but there’s a possibility that could have been a colt - maybe that’s why she lost it.

“She’s had nine foals in the last nine years and, bar one which came on February 6, they’ve all been foaled in January. She normally foals about ten days before time but on that occasion she didn’t.
“We examined her today and she’s fit and healthy and she’ll head to Newmarket in about a fortnight, and there she’ll be covered by Kingman.”

The bay filly foal is a sister to the winning pair Canonbury and Angel Vision, and joins the likes of Star Rating, Bohemian Dance, Upper Street, Edith Wharton and Floria Tosca as a daughter of Islington, who won four times at the highest level for trainer Sir Michael Stoute.

Reynolds added that the sex of the new arrival came as a surprise, as the stud does not scan its mares after an inaccurate prediction left the stud manager disenchanted with the process.

“We scanned one about ten years ago and they told me the mare was having a colt and I was very disappointed - but then she had a filly! I'm sure the process has improved a lot since though,” he said.

The new arrival is not the only significant event at Ballymacoll this week, as five lots from the stud are due to come under the hammer, consigned by Jockey Hall Stud, during the third and final session of the Goffs February Sale on Thursday.

The offerings come on the back of the stud being put up for sale, but despite having been on the market for around 12 months the celebrated nursery has yet to find a buyer.

“There’s negotiations ongoing but as yet there’s nothing definite, though we’ve had great interest,” Reynolds said. “We’re still trying to sell the whole thing, the company and all the bloodstock; that would suit me and the staff, as well as the executors. But if that doesn’t happen it doesn’t happen and we’ll have to go down the public auction route.”

The first Ballymacoll offering through the ring is likely to be the most coveted, as the three-year-old Edith Wharton (Lot 498) is a daughter of Darley’s flagship sire Dubawi and the aforementioned Islington, a champion daughter of Sadler’s Wells.

“As we have six Dubawi fillies I thought it might be an idea to sell one at this sale - hopefully she’ll sell well,” said Reynolds. “She’s a big, strong, lovely type and would make someone a nice foundation mare. I know Islington has only had the five winners and they haven’t got black-type, but it’s going to happen at some stage. Her progeny have been spread around a bit, between America and Europe, and Miss Rausing has a daughter as well.”

“La Divina has been a very unlucky mare for us, but she has the most beautiful Shamardal yearling colt, he looks the sort that should be very good. We don’t necessarily race our fillies, sometimes it’s better to leave them alone and that’s what we’ve done with these two.”

The oldest of the stud’s offerings is Kitty Hawk (568), a 14-year-old daughter of Danehill Dancer who has produced two winners in Tercel and Plane Song, and will be offered in foal to the late Big Bad Bob.
The final Ballymacoll lot to come under the hammer is the three-year-old Olive Branch (672), a once-raced daughter of Arcano and Athene whose half-siblings include Australian Group 1 winner Sir John Hawkwood, and the Group 3 winners Side Saddle and Greek Renaissance.

“She’s a very nice filly,” added Reynolds. “She was supposed to run last Friday but unfortunately she had a very minor setback that meant she couldn’t.”

Last October the stud reached a significant milestone when Sir John Hawkwood provided the County Meath nursery with its 30th top-level winner. Given that breeding such talented and durable racehorses can require virtually endless patience and no shortage of skill, the chance to buy into bloodlines that have produced 30 of them is one not to be missed.