The colt's yearling brother topped Book 1 at Tattersalls at 3,500,000gns 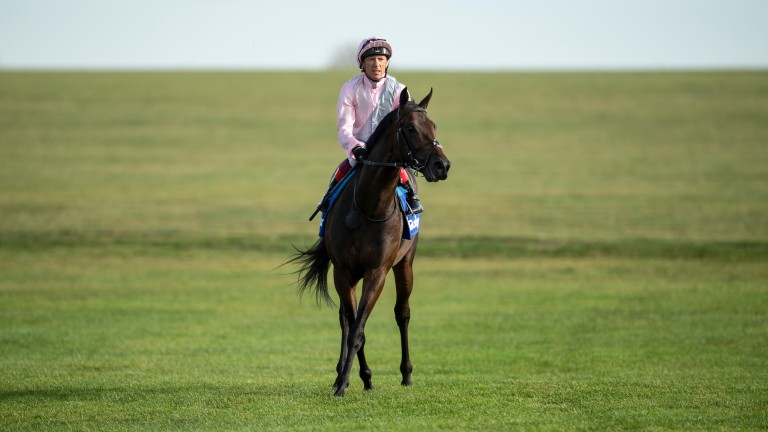 It was only on Wednesday when the Lloyd Webbers' Watership Down Stud sold 2018's most expensive yearling - a Dubawi colt out of Dar Re Mi - to David Redvers for 3,500,000gns during a blockbuster edition of Book 1 of the Tattersalls October Sale.

After the top lot had left the ring, Madeleine Lloyd Webber said: "All Dar Re Mi's offspring are very intelligent, now we've just got to hope she's going to breed a Group 1 winner."

Just three days later and her wish was granted, as her homebred Too Darn Hot - a full-brother to the 3,500,000gns yearling - followed in the footsteps of Frankel, Shamardal, El Gran Senor and Nijinsky by winning the Group 1 Darley Dewhurst Stakes, and by a widening two and three-quarter lengths to boot.

Full result and replay from a thrilling Dewhurst Stakes

Too Darn Hot is the fifth foal out of three-time Group 1 winner Dar Re Mi, a 13-year-old daughter of Singspiel who won the Pretty Polly Stakes and Yorkshire Oaks at four and Sheema Classic at five.

Being by a Classic-winning miler in Dubawi and out of a late-maturing middle-distance performer, Too Darn Hot's optimum trip is sure to be the subject of much debate over the coming months. 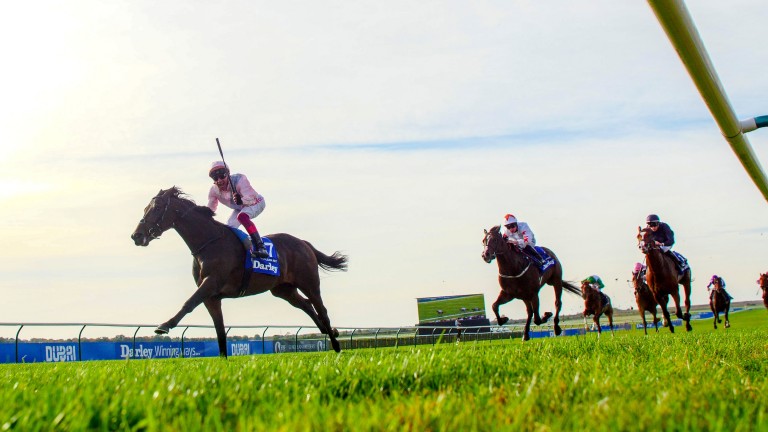 Too Darn Hot powers clear of Advertise and Anthony Van Dyck to win the Group 1 Darley Dewhurst Stakes
Mark Cranham
After the race, his trainer John Gosden commented: "He's blessed with an awful lot of speed. His mother got a mile and a half, his father was a phenomenal miler; so he seems to be taking more after his father at this stage."

Dar Re Mi's brood have been in fantastic form this year, with her daughter Lah Ti Dar - also by Dubawi - winning a pair of Listed races by an aggregate of 13 and a quarter lengths and finishing a fine second to Kew Gardens in the St Leger.

Four of Dar Re Mi's five runners have gained black type, with So Mi Dar claiming the Group 3 Musidora Stakes and De Treville - who it was announced this week will stand at Haras du Mezeray in Normandy next year - reaching the podium in four Group 3s.

Unsurprisingly, given how well she has clicked with Dubawi, Dar Re Mi also has visited the Dalham Hall resident the last two covering seasons, producing another filly by the son of Dubai Millennium in April this year.

There could well be more Group 1 glory for the family on the horizon too, as Lah Ti Dar is a short-priced favourite for the Qipco British Champions Fillies and Mares Stakes at Ascot next Saturday.

The Dewhurst also capped a memorable week for Dalham Hall linchpin Dubawi, who was represented by another top-flight winner in Australia on Saturday when Benbatl claimed his third Group 1 in the Ladbrokes Stakes at Caulfield.

The 16-year-old Dubawi has now sired 38 elite winners, three of which count Singspiel as their damsire, with Prix Marcel Boussac and Breeders' Cup Filly and Mare Turf heroine Wuheida being out of Hibaayeb and Prix Vermeille victress Left Hand being out of Balladeuse.

The Dubawi-Singspiel cross has been responsible for 13 winners from 19 runners, including Great Voltigeur victor Old Persian and Group 3 scorers Laugh Aloud and Rare Rhythm.

Moreover, Dubawi is now responsible for the season's two highest-rated juveniles, with Too Darn Hot on a Racing Post Rating of 126 and Quorto, unbeaten winner of the Group 1 National Stakes, on a mark of 122.

If you found this story of interest you should read...

FIRST PUBLISHED 5:36PM, OCT 13 2018
His mother got a mile and a half, his father was a phenomenal miler, so he seems to be taking more after his father